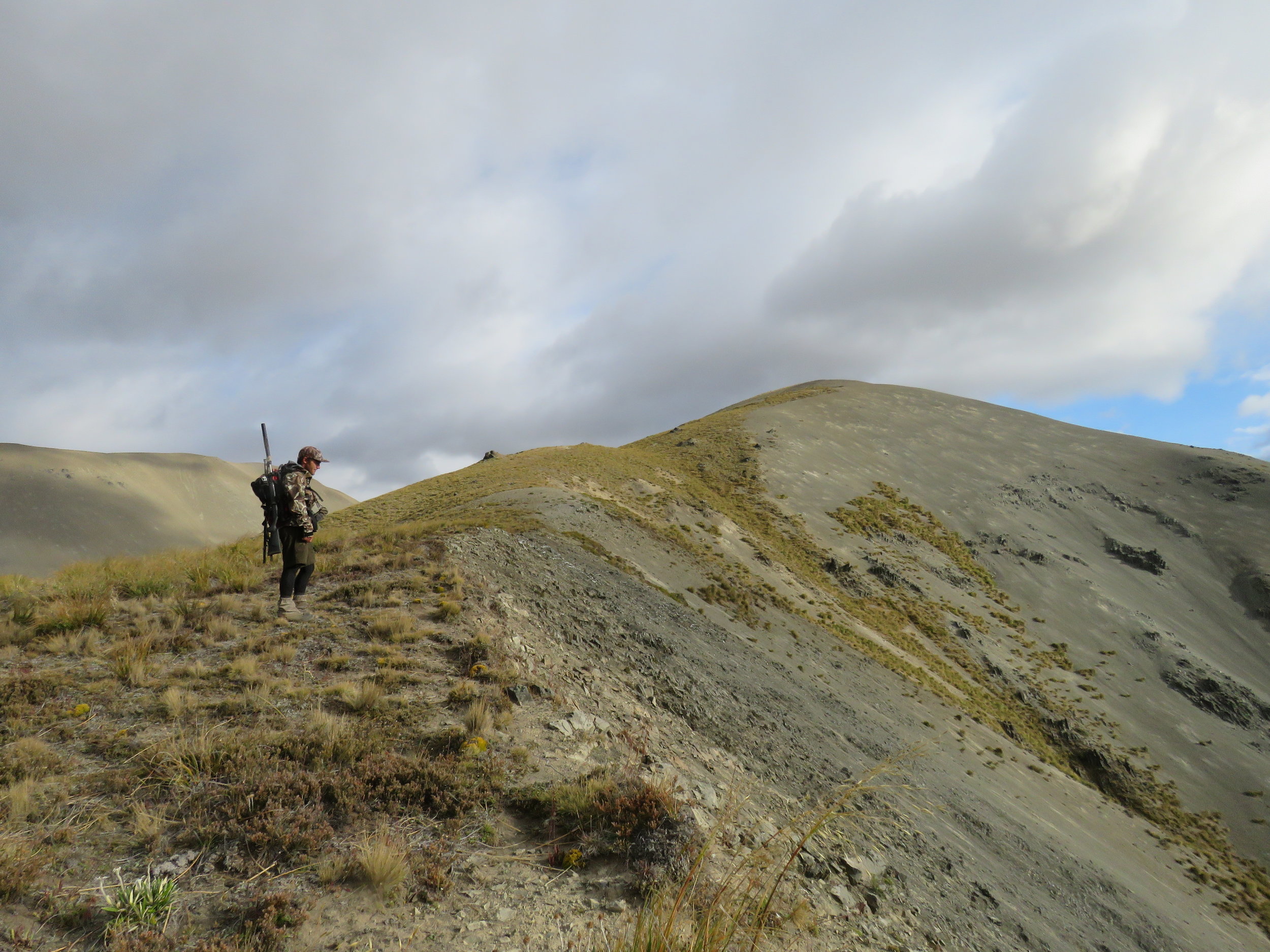 Once Christmas and New Year is well out of the way many of us that have taken a break from hunting during fawning and velveting, suddenly realise that we are seriously lacking hill fitness! The lard is upon us and so is the hard antler season, so there’s only one solution and that’s to dust off the old back pack and stretch the legs through some decent hills.

The video trip report from this hunt can be found at the end of this article.

I linked up with the Points South brainchild, Cam McKay and we freed up a few days in late January to venture into a public area new to us, in the hope of checking out some big red stags. Being the first backpacking mission for quite some time it took me a little longer than usual to sort out all the kit and then figure out what to throw out of the pile to reduce the weight. 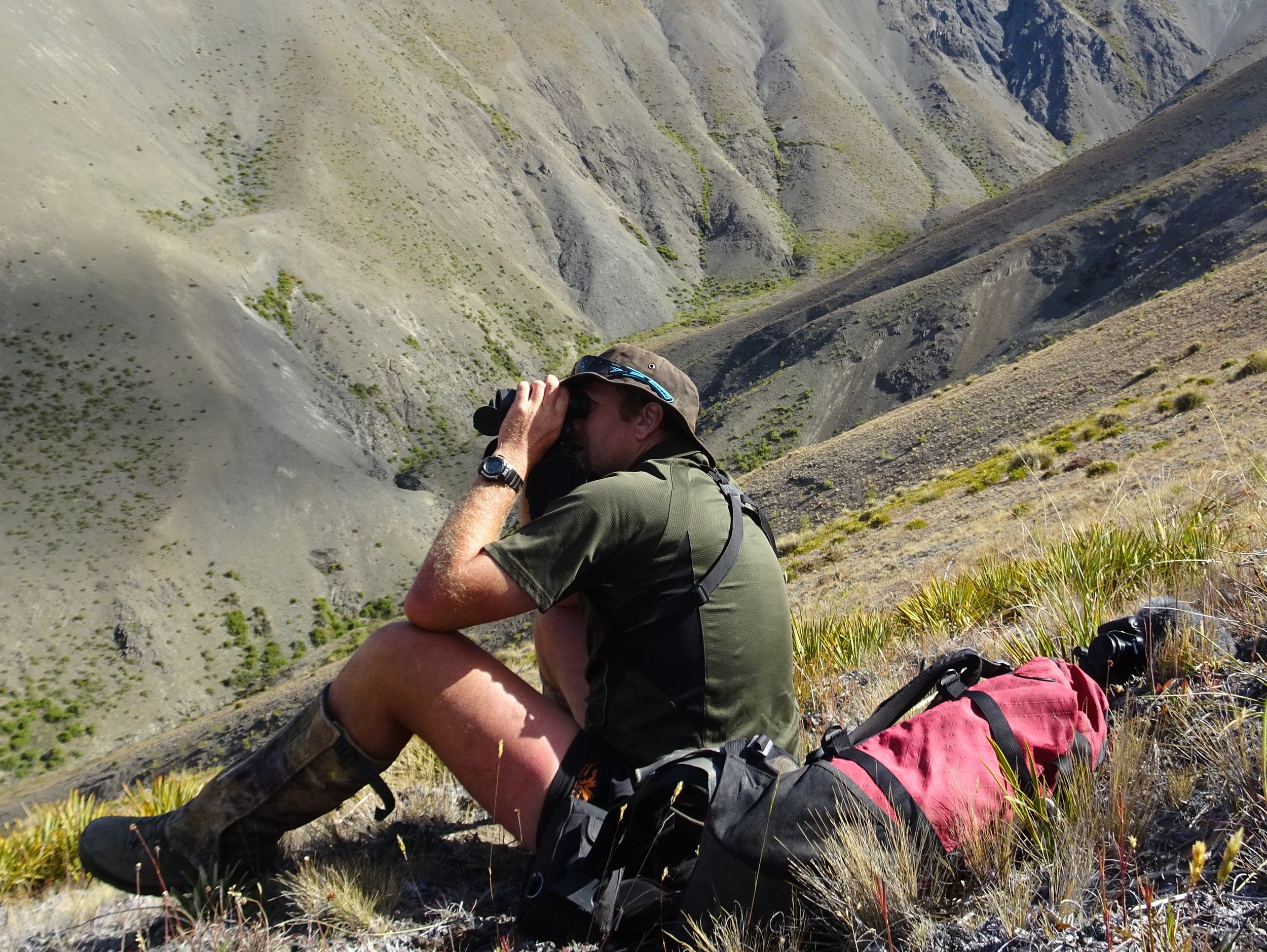 In the end my gear list from the ground up consisted of ¾ shank tramping boots, gaiters, socks, jocks, quick dry light weight shorts, merino leggings, singlet, long sleeve base layer, breathable polo and a fleece mid layer, wooly hat, sun hat, sun glasses and watch. To top the clothing off with an outer layer, I chose a lightweight packable rain coat called the Seak Stormtight, a high spec all weather jacket made by a USA hunting apparel company First Lite.

I grabbed a small 55 L back pack to double up as a day pack once we made a base gear dump. The pack was too small to fit everything inside so the single man tent and air mat had to strap along the sides. Inside the pack was the sleeping bag, merino gloves, plus spare jocks and socks inside a waterproof rubbish bag. Also a cut off square of foam bed roll as an arse mat for sitting on the hill while spotting.

Water proof belt bags were fitted to the waist strap of the pack containing the action camera, zoom camera, mic, and spare batteries, plus I carried the tripod by hand to double as a hill stick. Of course the 10 x 42 binoculars fit secure and ready for use on the chest harness, it took me years to get one of those chest harnesses but it is one of the best decisions I ever made. 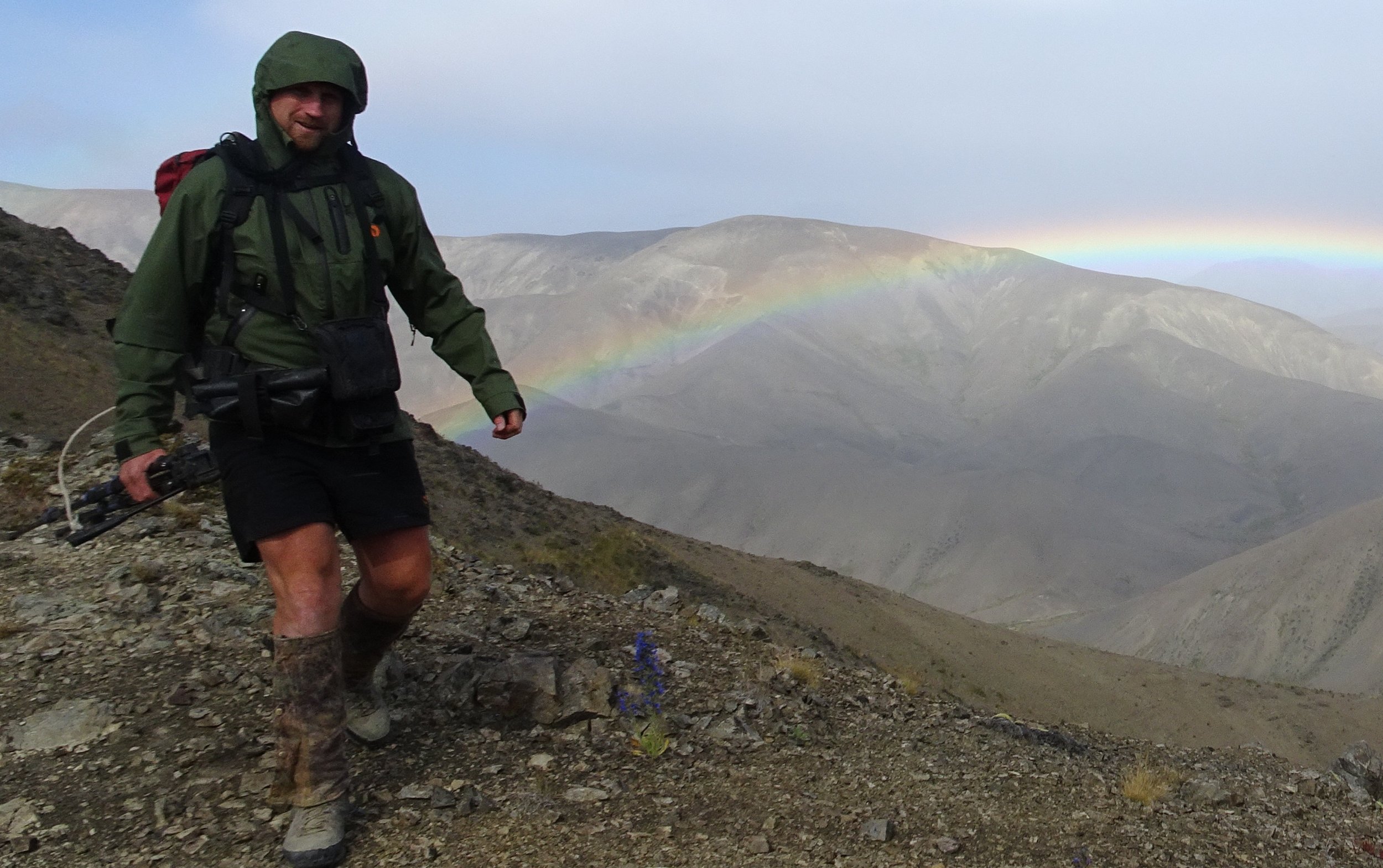 Shaun Monk getting blasted by the never ending Nor-Wester. He left his rifle behind in trade for the tripod and cameras. Also sporting a newly refurbished knee, a bit of an inwards bend but doing the job for now. 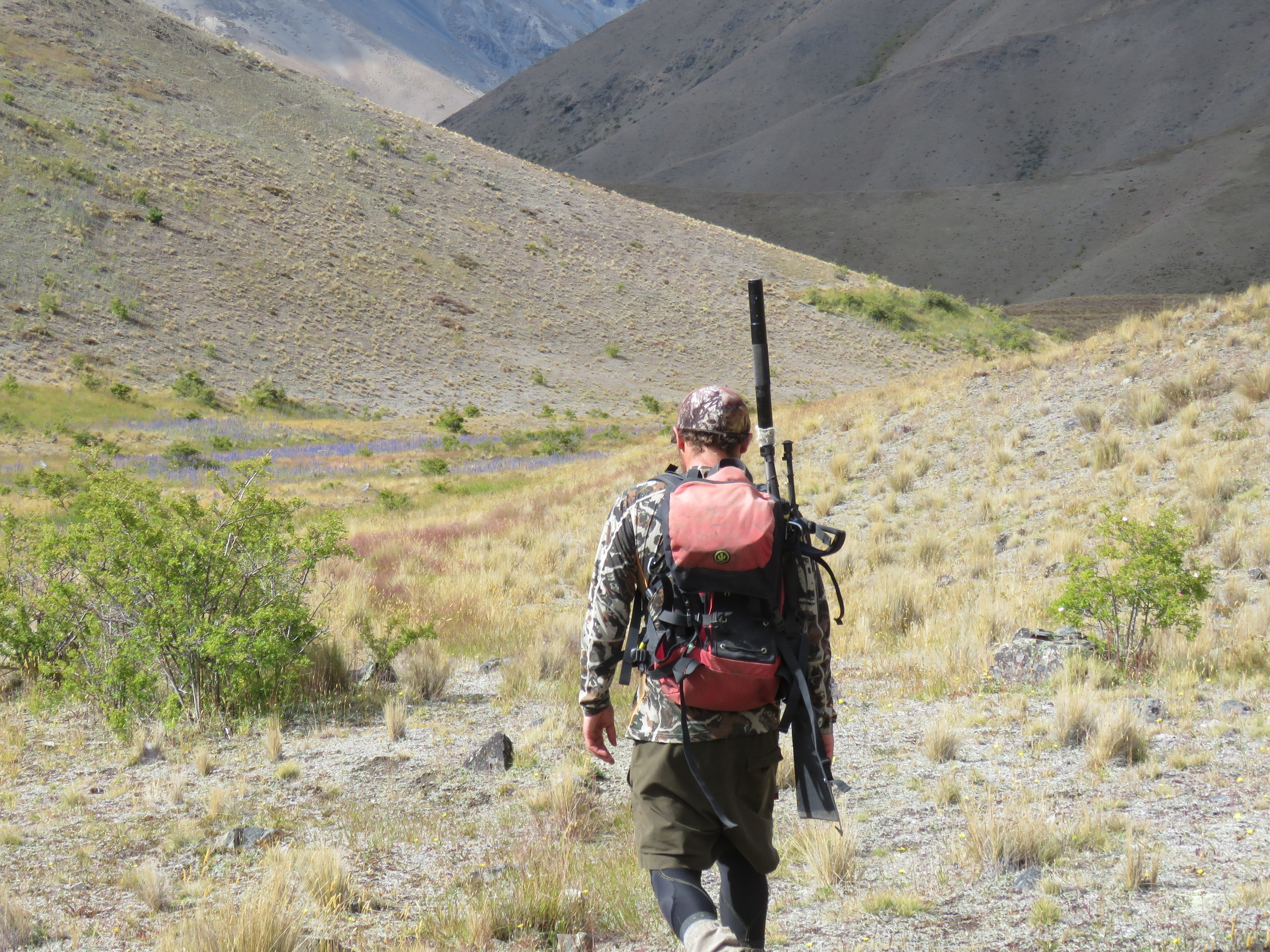 Cam’s gear had two major differences to mine, one being a spotting scope (I use my super zoom camera for this function) and the other big difference was that he had to carry the rifle, bipod, suppressor and ammo! I decided not to carry a rifle at all on this trip and being a trophy hunting exercise we really only needed the one bang stick between us anyway. A pair of two way radios could have been a handy extra item to take on this trip and allow a spotter to keep in touch with a stalker, but I left mine behind.

If the aim of this trip was to get a bit of exercise, then Cam and I certainly got plenty of that! Just hiking in to our camp site took hours and by the time we had climbed up and down a couple of ranges and closed in on some distant stags, we actually ended up a lot further in than expected. As the evening started to close in we realised that our gear dump of tucker and tents and sleeping bags was about as far away is it possibly could have been. So after a few more hours hiking along in the dark it seemed like day one would just never end! The strong Nor West wind had been horrendous, giving us a fair old beating as well as costing us a spooked mob of stags. 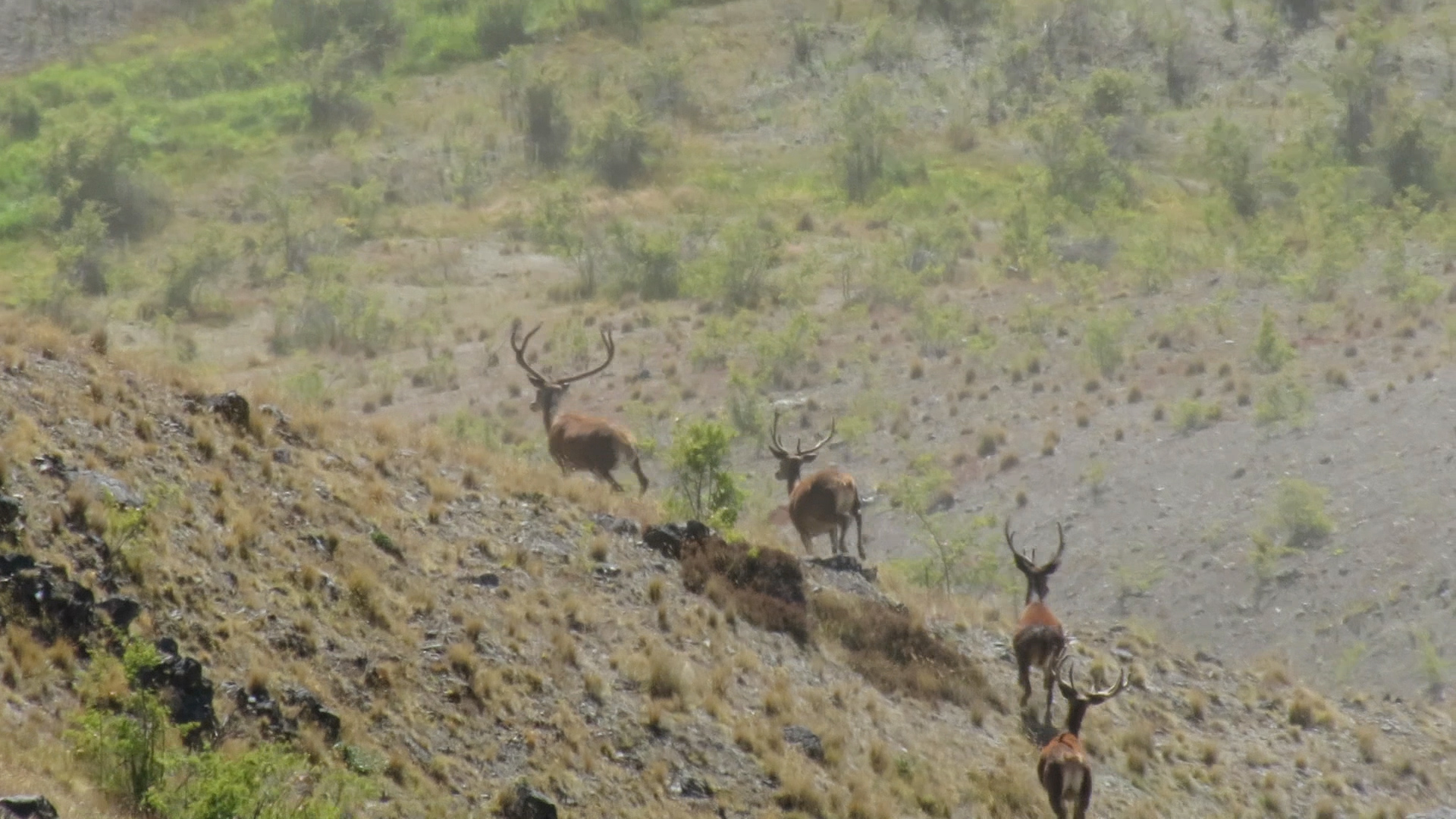 A clip from video footage of a stag mob that spooked due to the swirling gusts of wind, bugger! 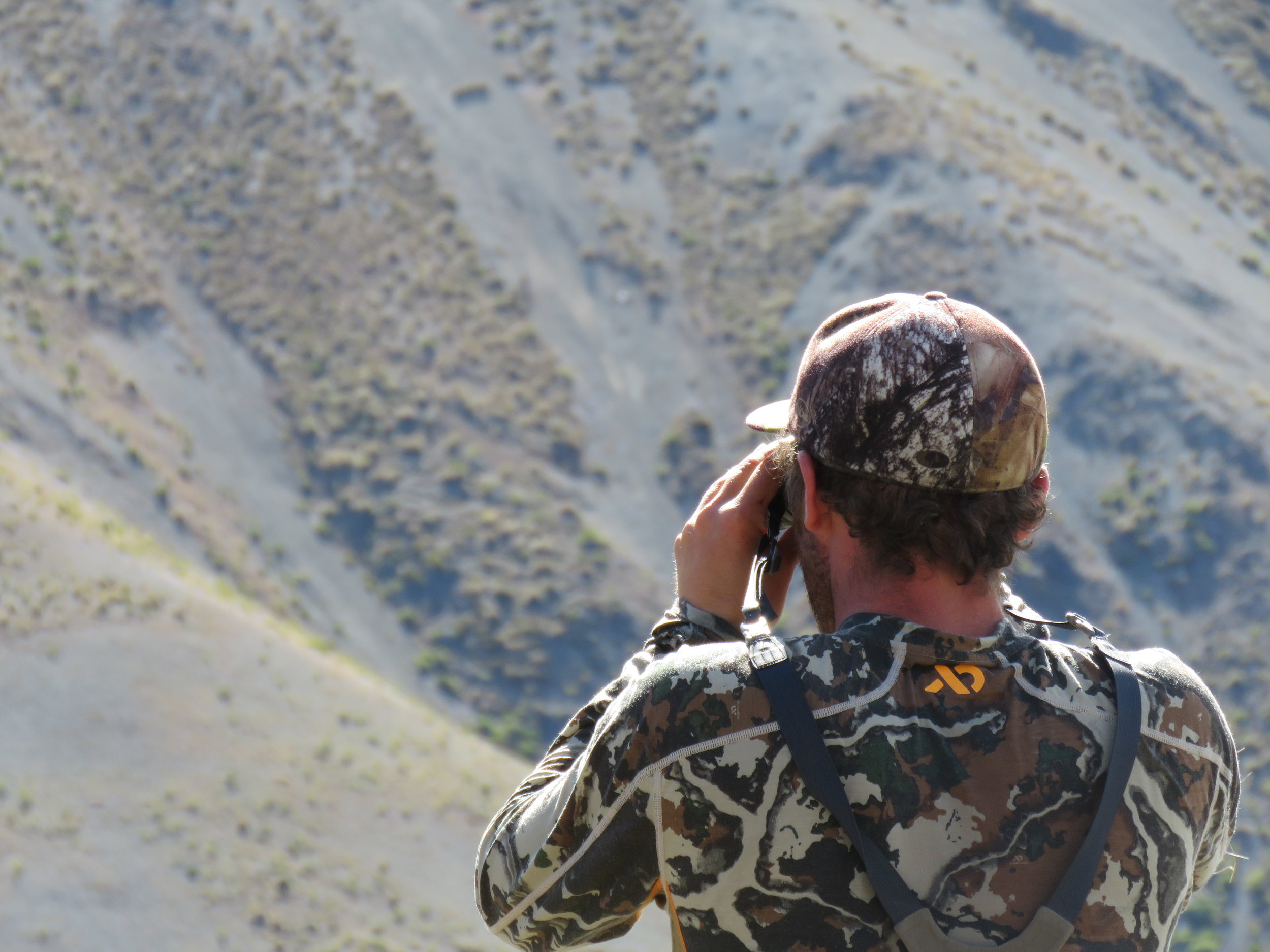 Cam McKay looking for trophy rabbits and giving the " Wilkin" merino base long sleeve top a good work out. A new product coming to New Zealand from First Lite. 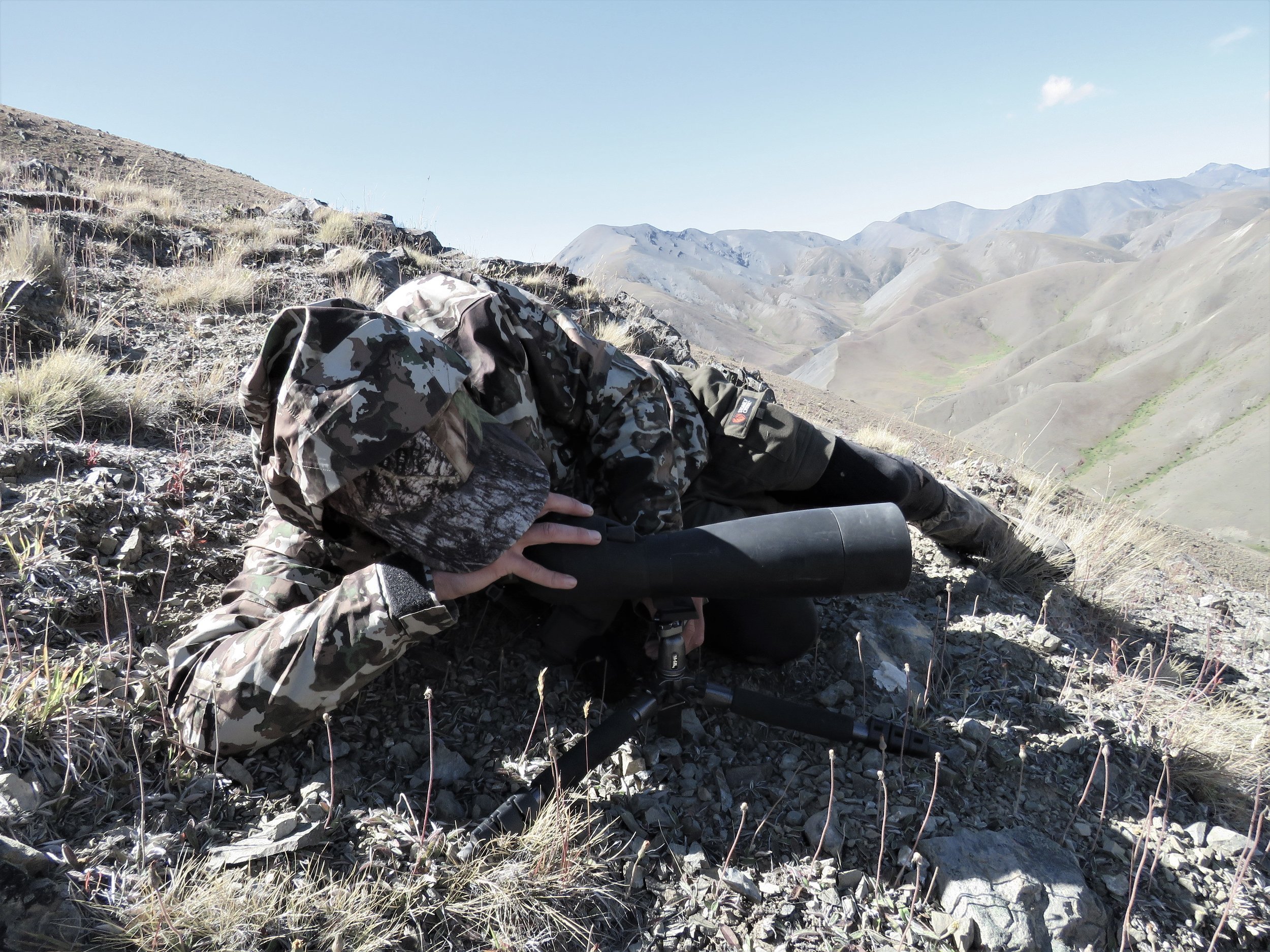 Cam McKay on the spotter, bloody hard to operate in the strong wind, but he has seen something worth a closer inspection! The First lite Fusion Camo is pretty neat too. 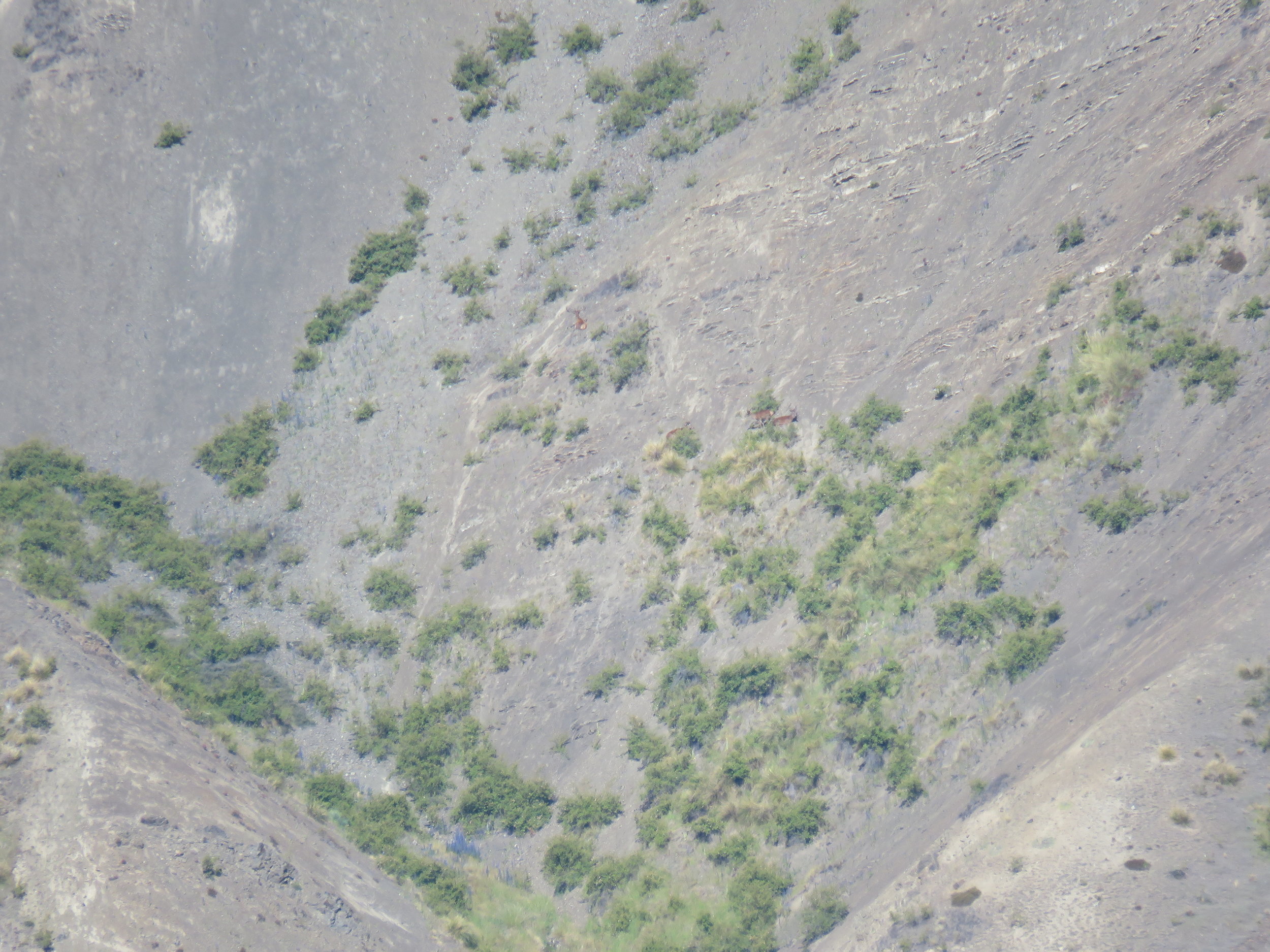 Four stags bedded down a couple of km away, time for more walking! 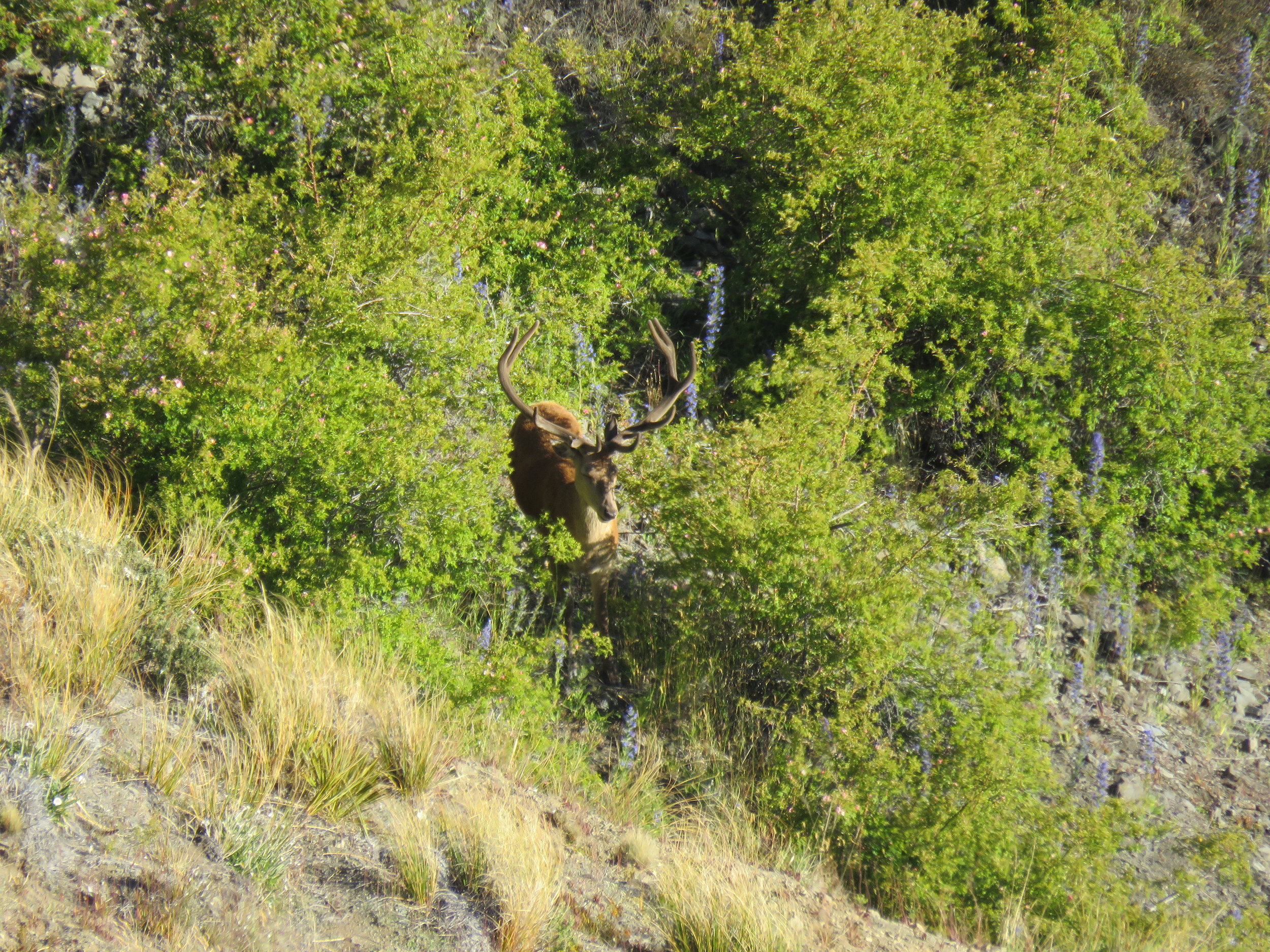 A very nice young stag about as far away from the ute as we could have ever got on day one! 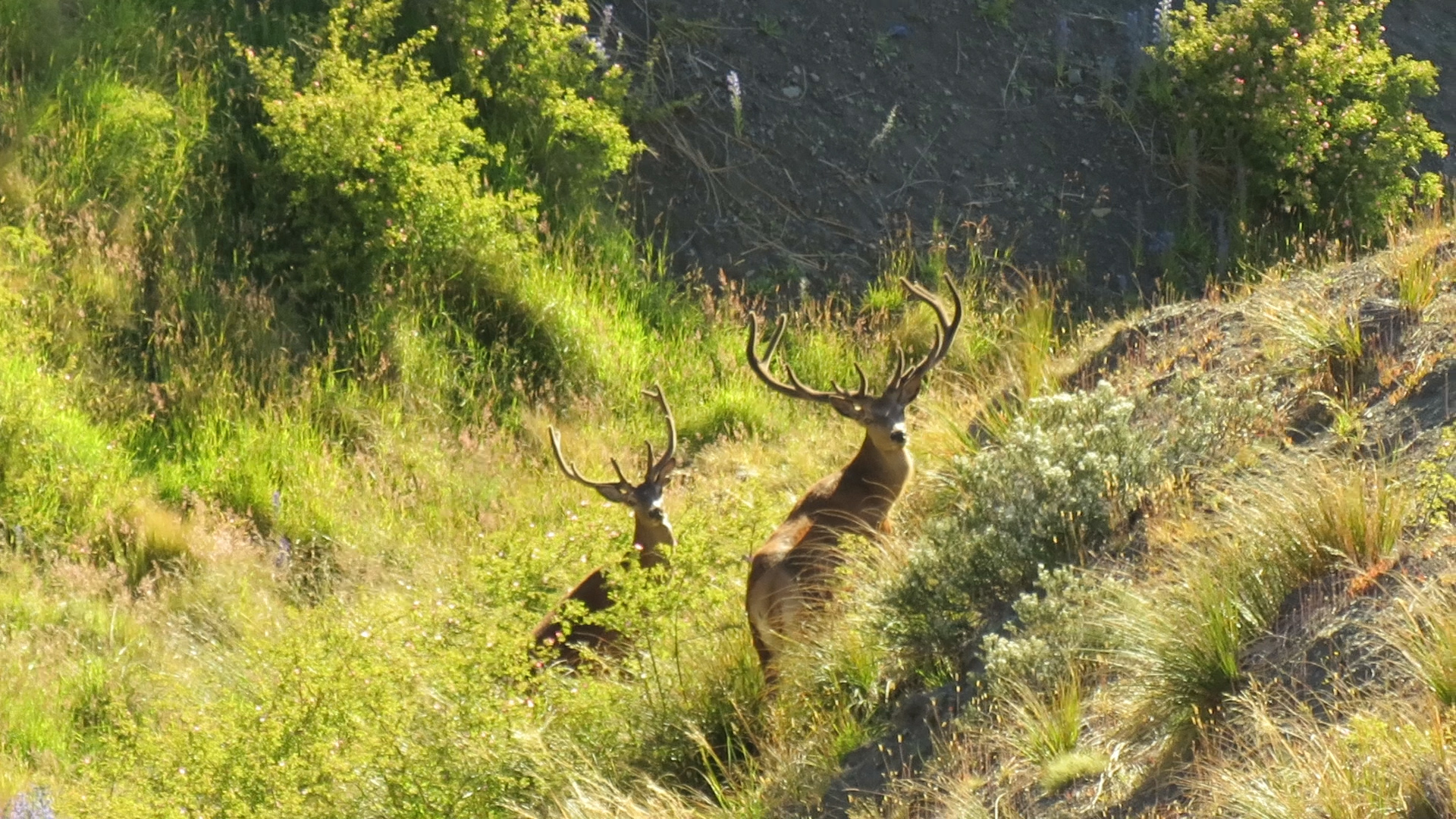 The long sweeping main beams look even more impressive when he stands next to his little friend. 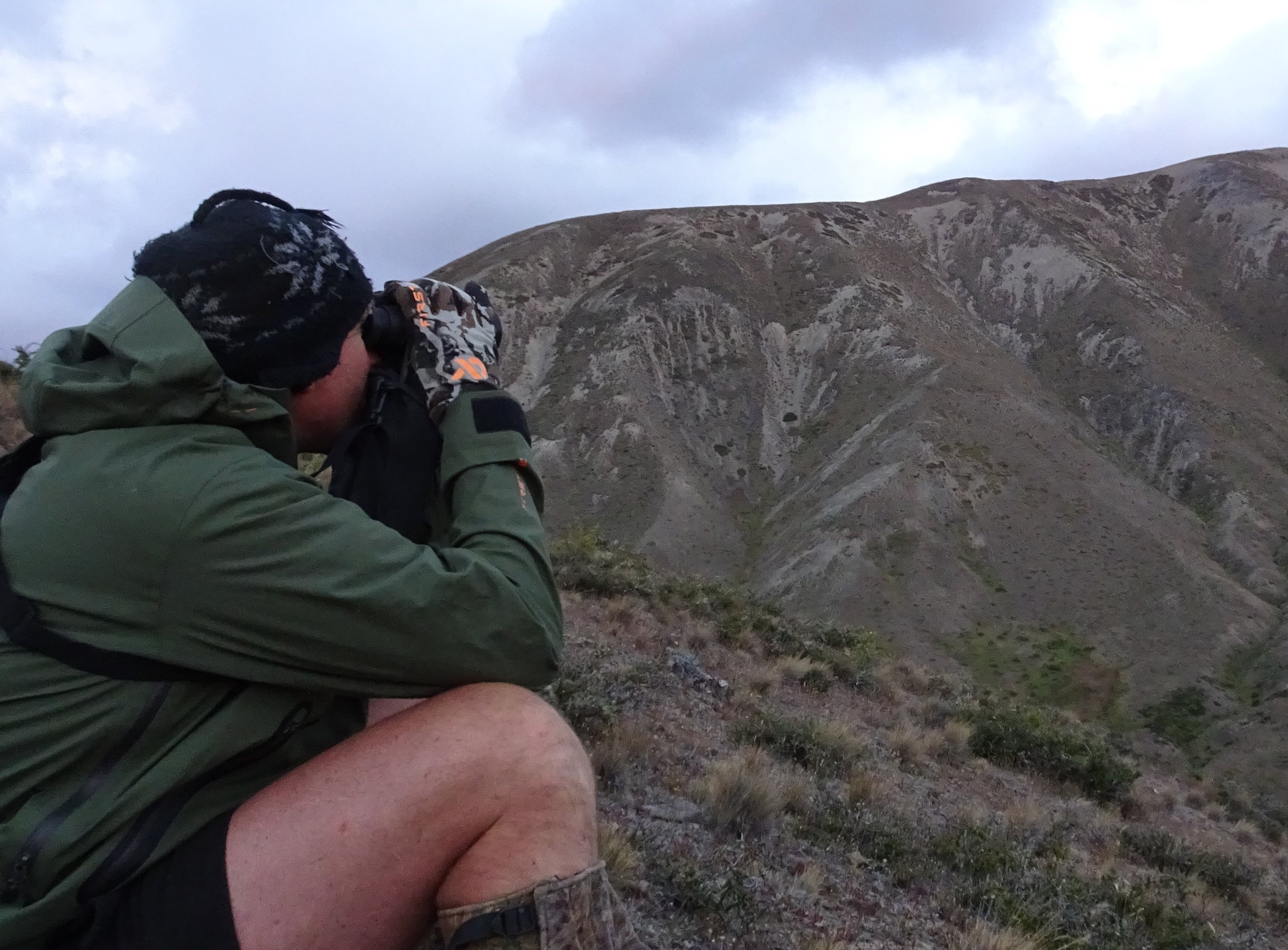 Shaun Monk sitting in the strong wind to spot into the sheltered gully heads, the First Lite merino gloves and the plain green Seak Stormtight packable jacket kept the showers and wind at bay. The jackets big under arm vents were great to zip open when climbing hard in the heat. 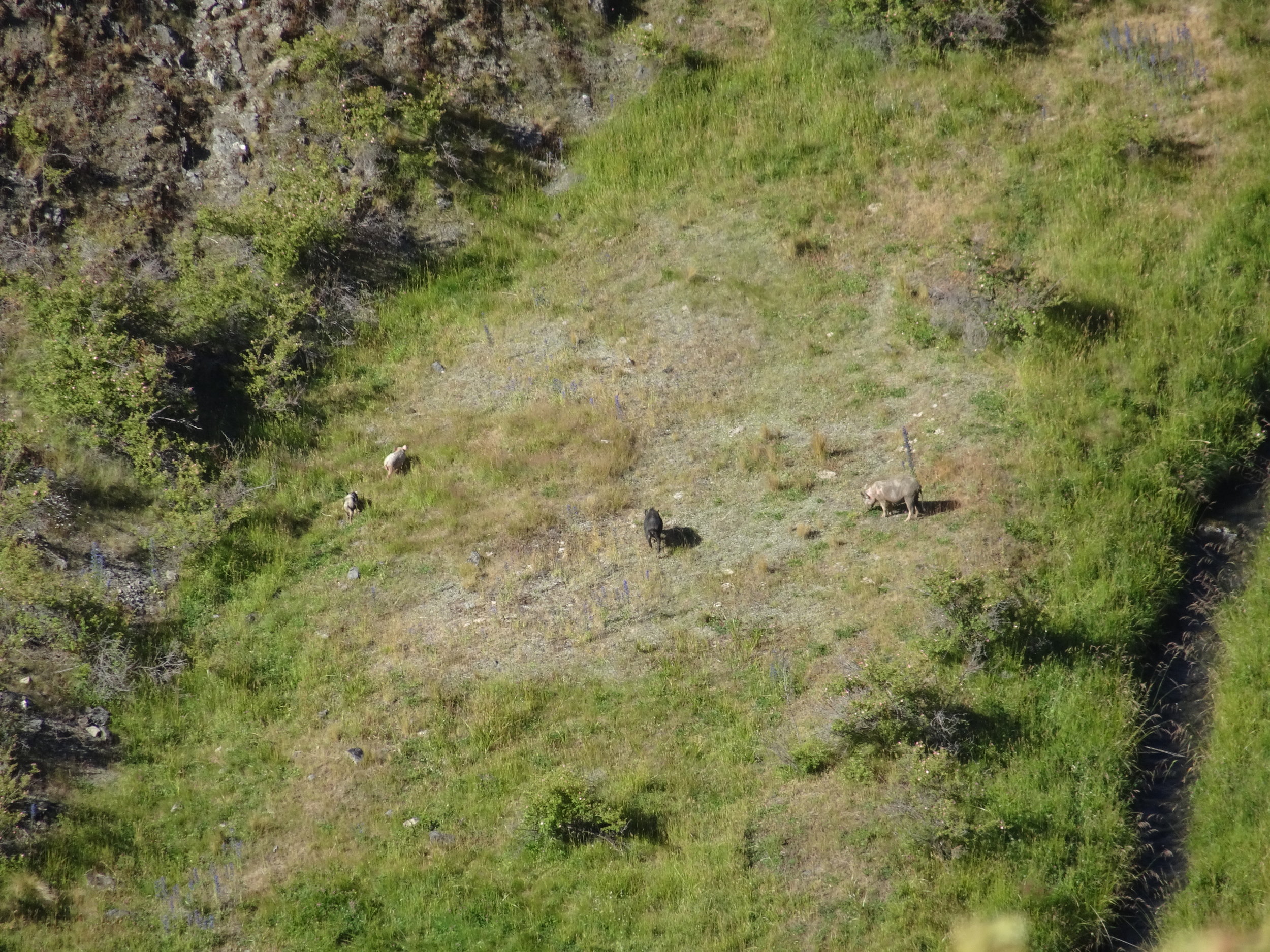 A mob of porkers feeding on the valley floor.

However the regular encounters with deer and wild pigs had kept us well motivated through the day, once it got dark though, it was just a plain old slog. At mid-night, after 18 ½ hours and 30 km of wandering we finally curled up in our nests and there was nothing waking us until the sun hit camp well after day break.

It was a bit embarrassing missing out on the morning hunt on day two, but to be honest we’d probably bitten off a bit more than we could chew for first trip of the year and the rest did us the world of good. By mid arvo we set to task for another decent climb up onto a central ridge giving us a dominant view over several gully heads as the afternoon rolled on. Deer started to appear from no-where but they were all hinds and fawns, with not a single stag seen so day two was not very productive. 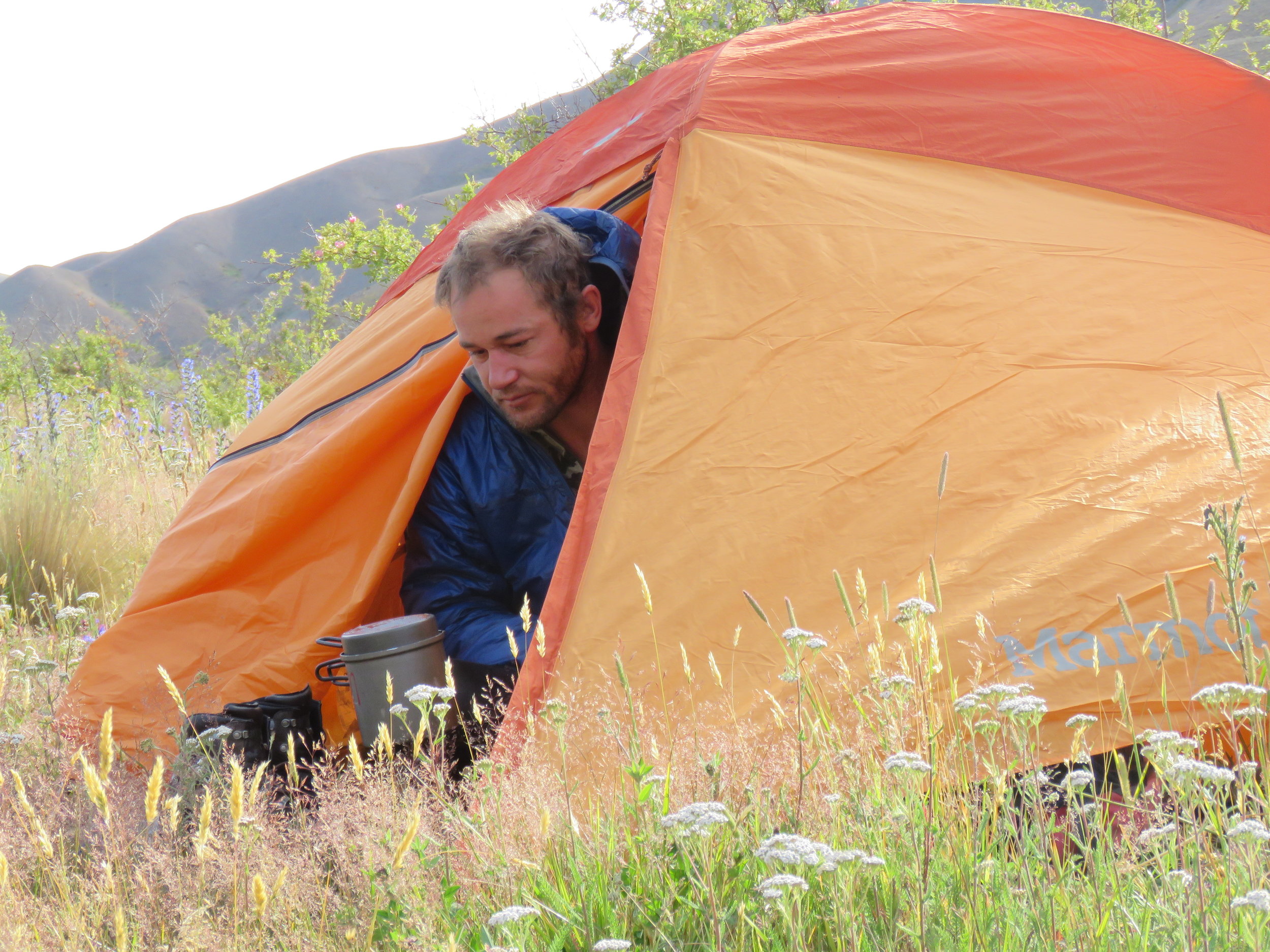 The morning after a very long day and night, we bit off a bit more than we could chew! 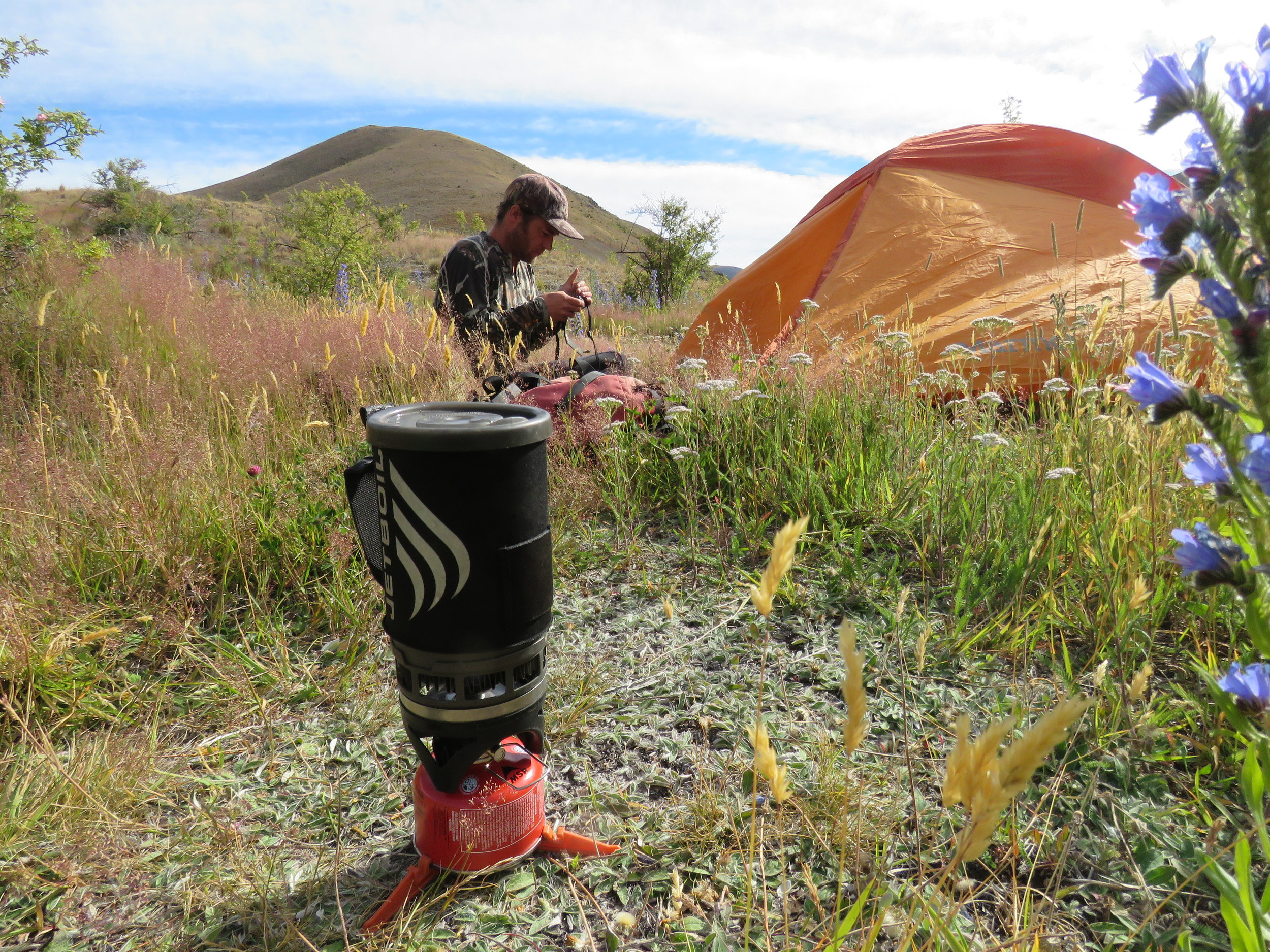 The good old Jet Boil, wouldn't leave home without it now, love me some cups of tea. 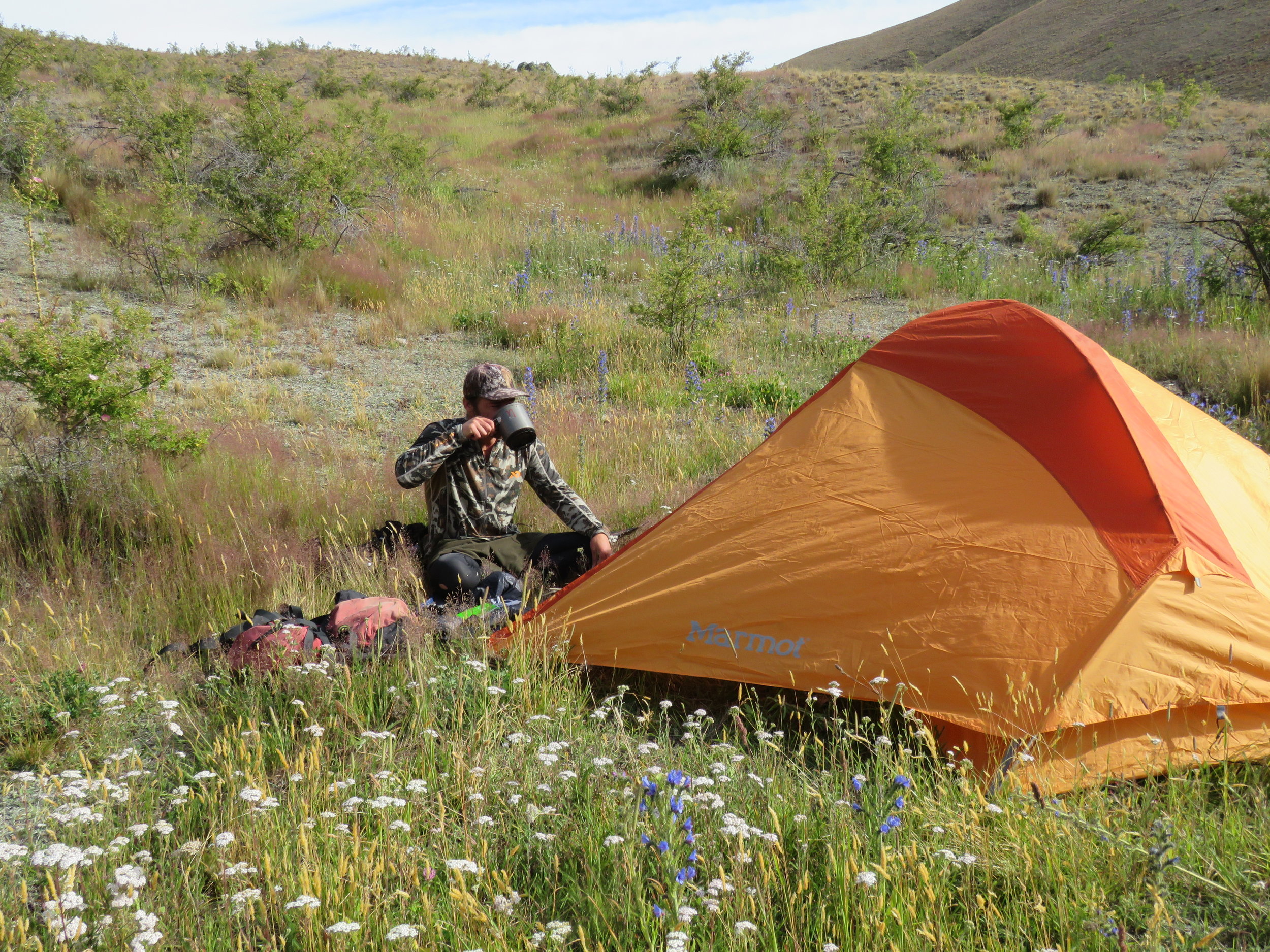 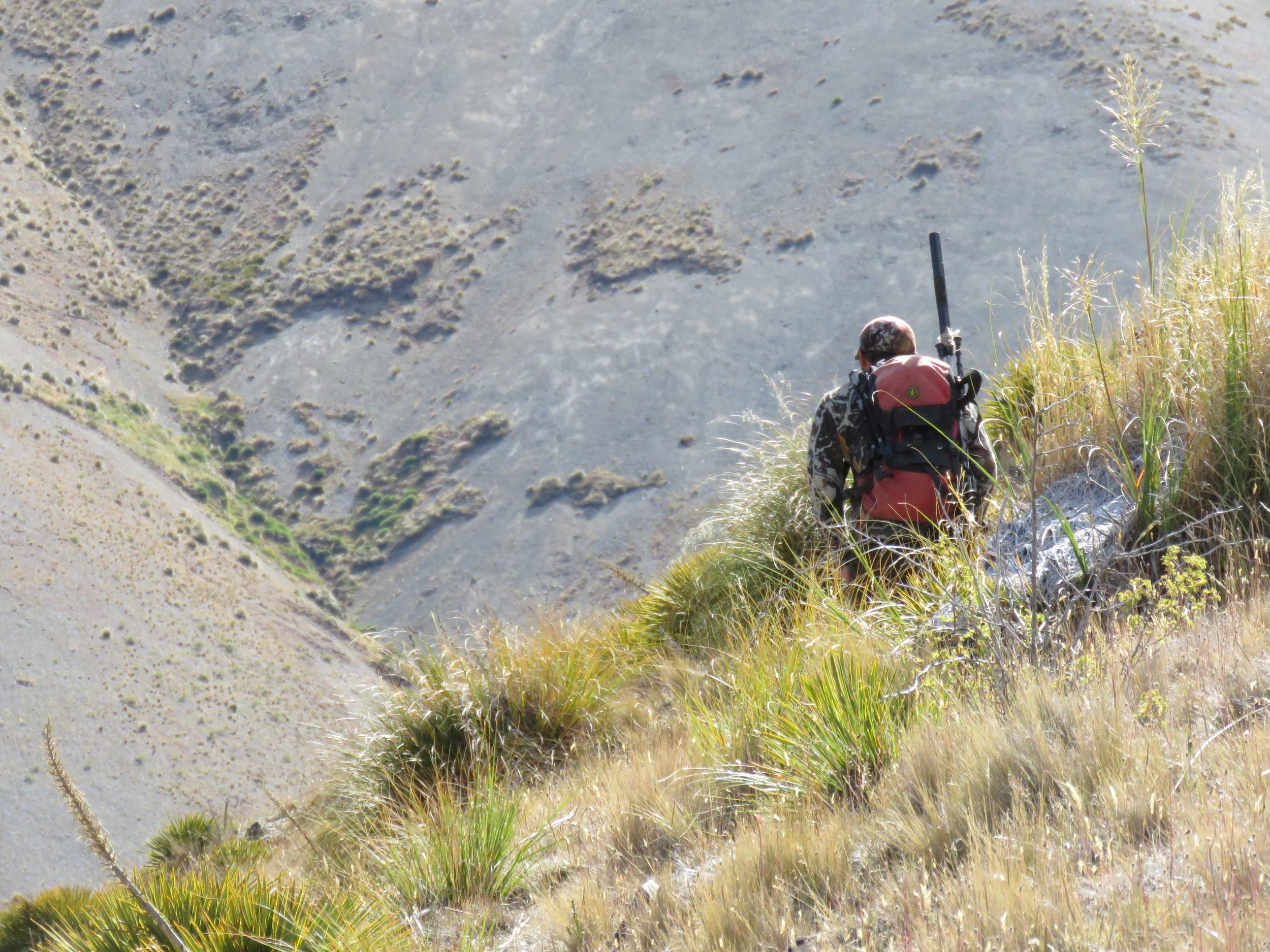 Taking a sneaky peak over the ridgeline. 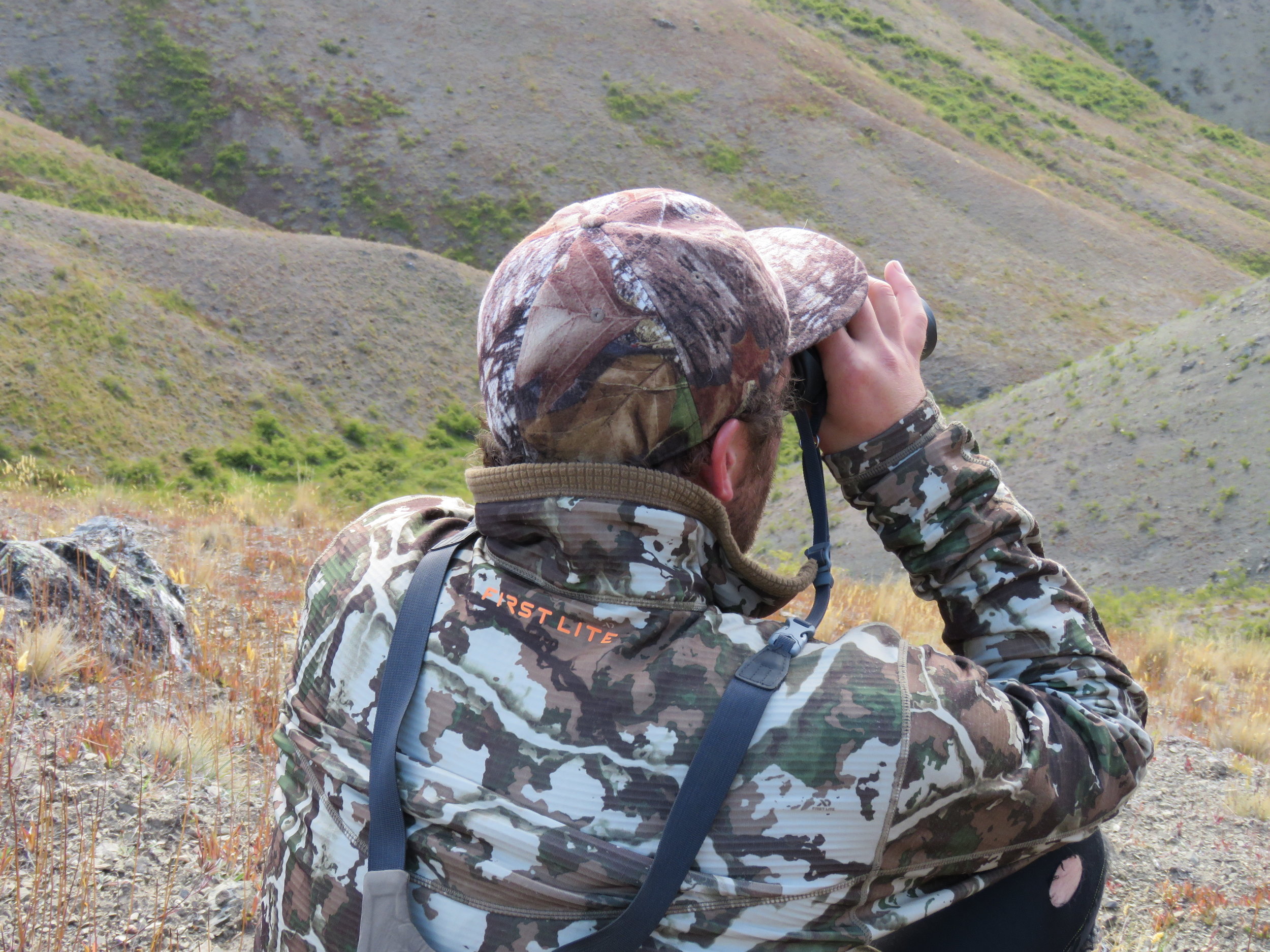 It seems barren, but there's game to be found. The First lite "Halstead" tech fleece mid layer was a comfy functional shirt. The First Lite Fusion camo pattern isn't too bad either.

Feeling guilty about the previous sleep in, we set the alarms for 4am on day three, up and hiking in the dark to chop out a section of dead ground and get to the head of a nice gully before dawn. We climbed up onto a high knob that overlooked the area and cranked up the bino’s as the day light showed. The effort was well worth it as we spotted several stags scattered about in small groups. A couple of these stags looked pretty good and one in particular seemed to have numerous points and heavy timber so we planned out a drop into the valley floor and another big climb to get above these animals for a closer inspection. The view from up on the ridge was great and we bumped into a few younger stags along the way but unfortunately by the time we’d got into position, the bigger stag had crossed over the valley and bedded down on the other face. There was very little hope of an approach without being spotted in such big open country and sure enough the pointy stag and his mates eventually trotted off to even higher ground. We both agreed that this stag was actually not fully mature and could well grow an even more impressive rack in the next couple of years. 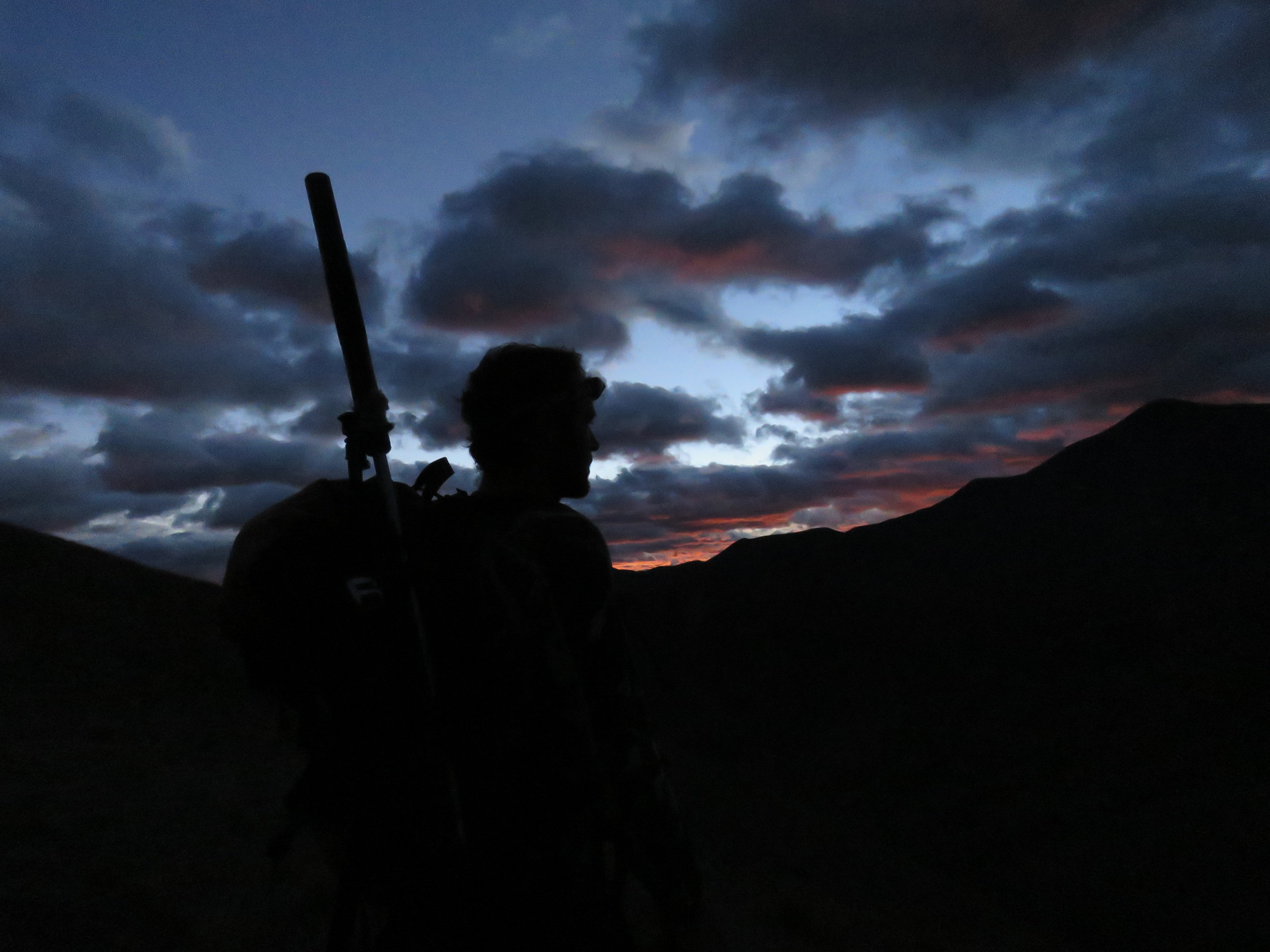 An early start on day three put us in a very good spotting position at day break. 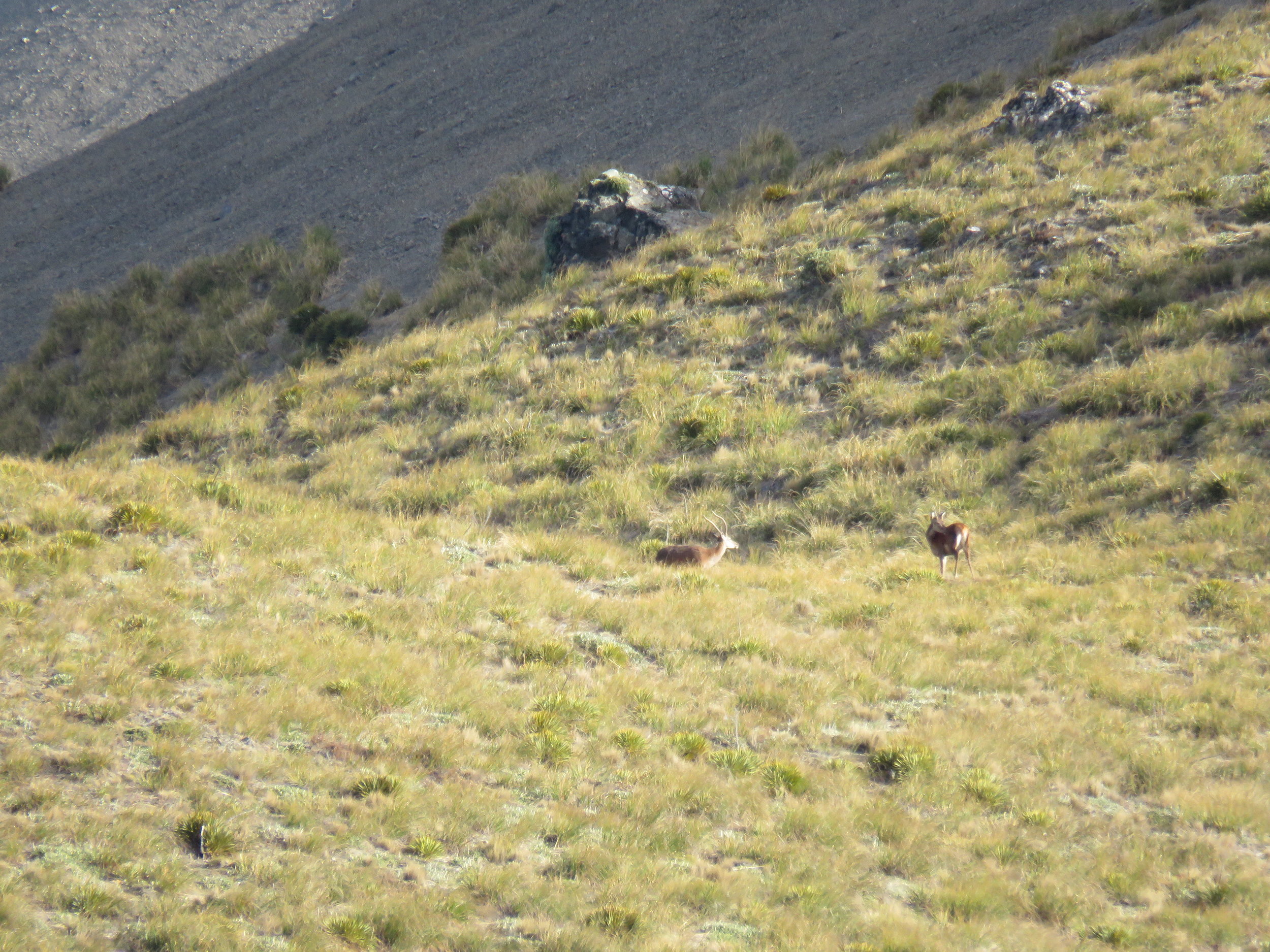 A couple of spikers off in the distance. 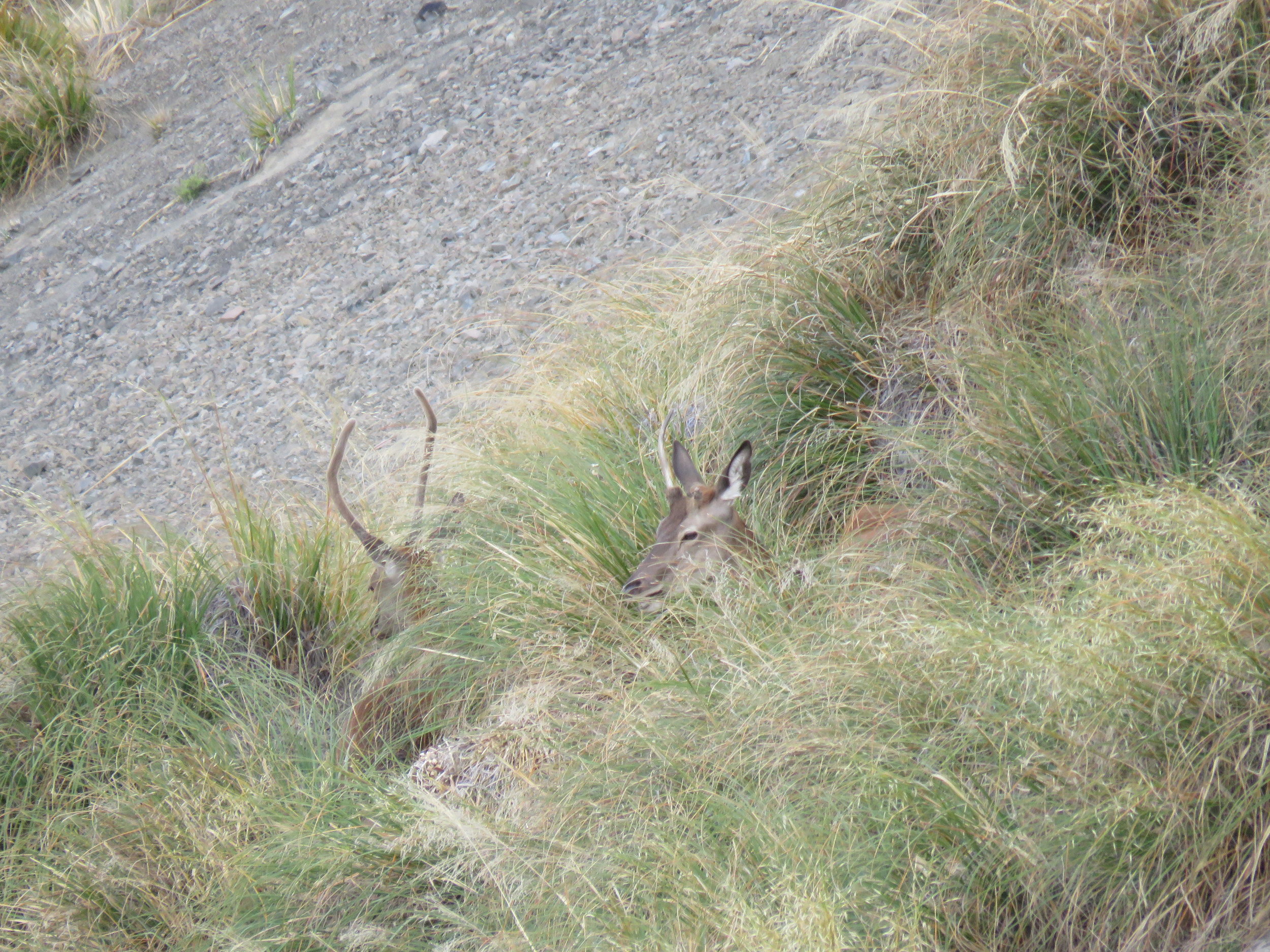 Found the same two spikers again later once they had bedded down on the other side of the hill. 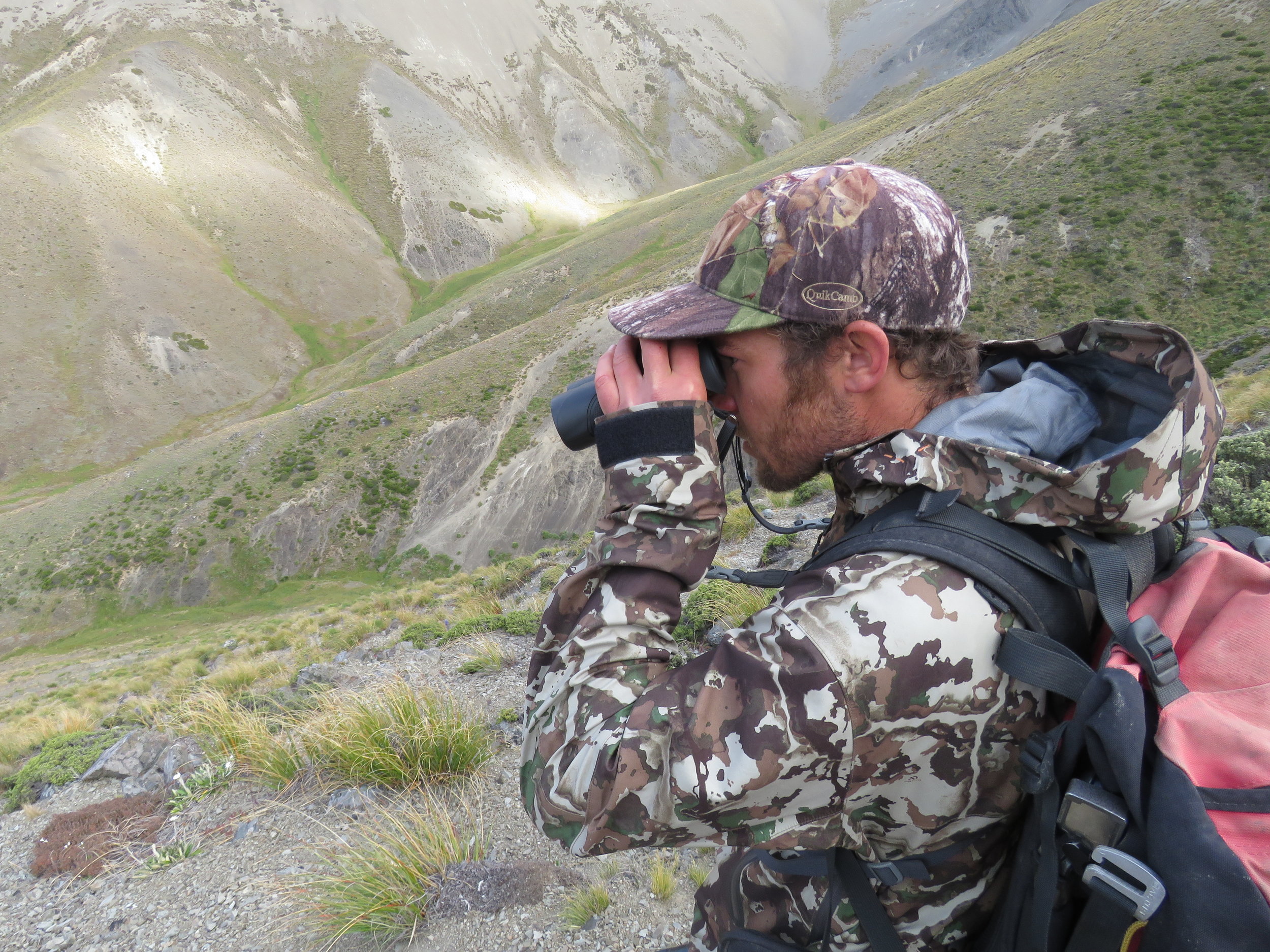 Checking out the head of the valley - Cam's wearing the Fusion camo version of the Seak Stormtight jacket from First Lite . Having these high spec packable coats now specifically designed for hunting, has thankfully brought an end to the days of having to weather a storm in fluffy pyjamas. 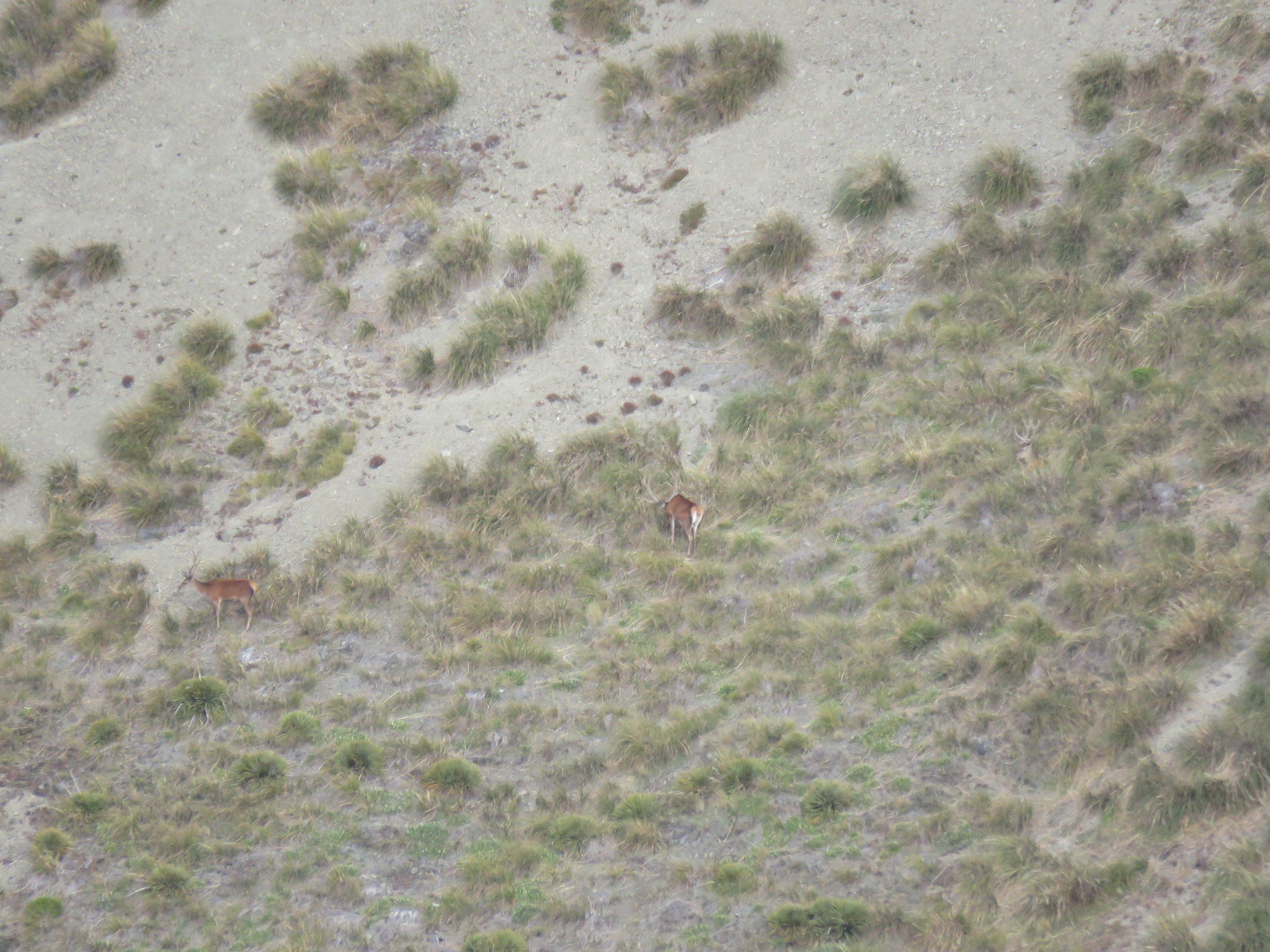 The stags that swapped sides of the valley before we'd managed to climb around above their early morning grazing spot. One of these boys is not far away from being a very nice trophy for someone. 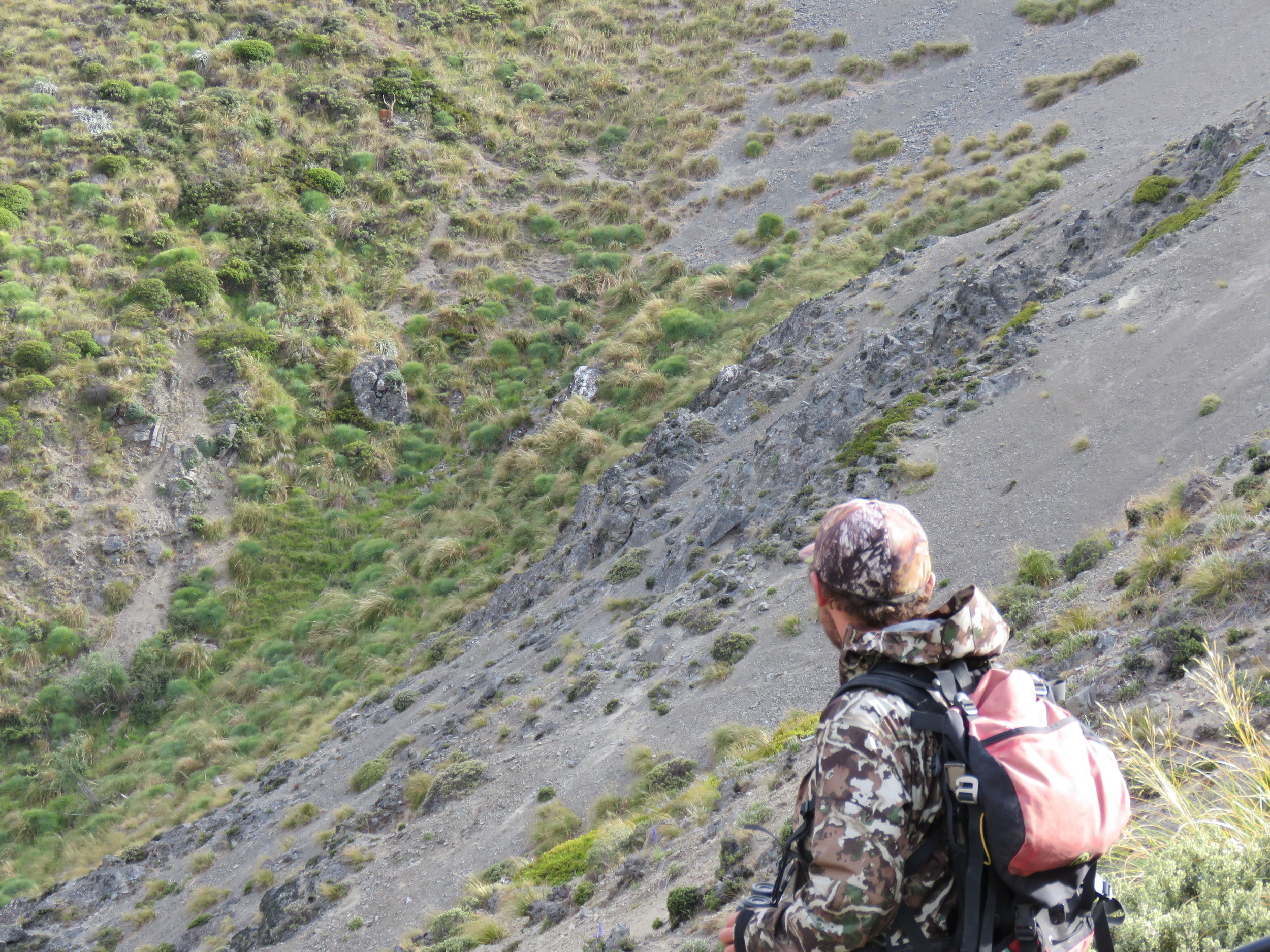 I see you. An inferior 6 point stag watches us but isn't too concerned and actually continues grazing for a bit. 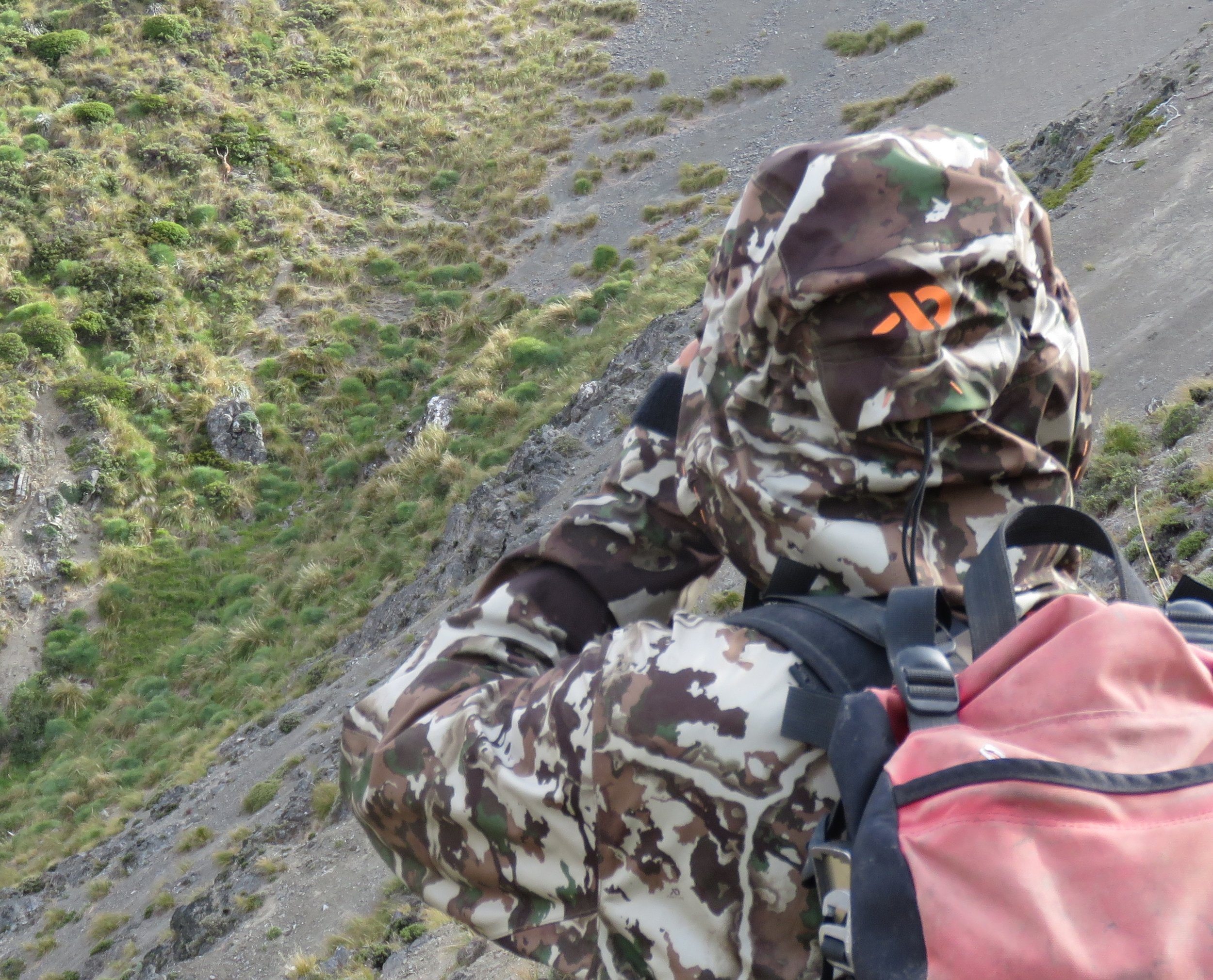 If you look at a crappy six pointer long enough, it sadly doesn't turn him into a twelve! 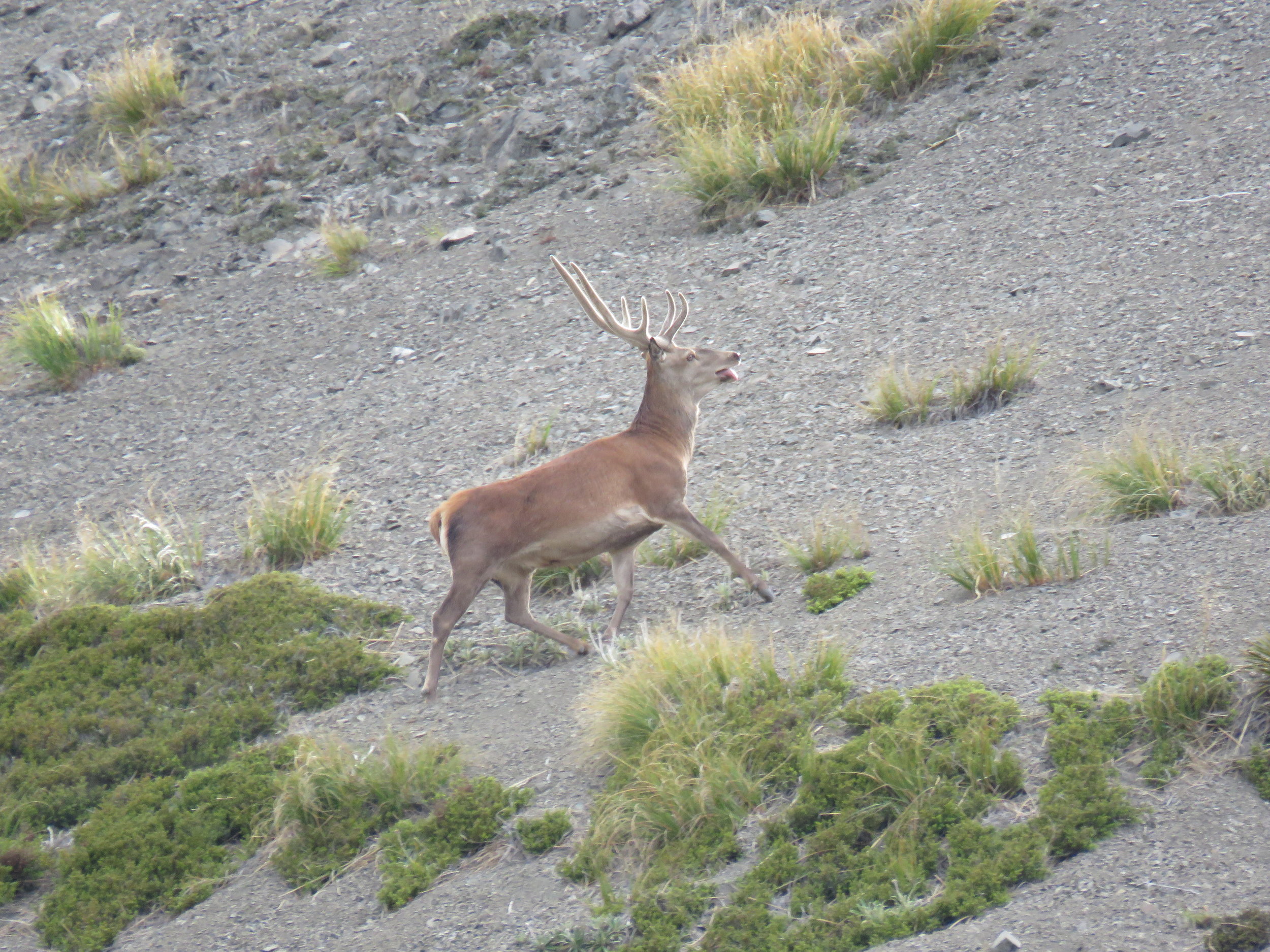 There is a lot of meat on this fella, if he'd been closer to the ute he would've been in trouble!

The morning was well and truly cooked now so it was time for another long trudge back to camp to pack up our gear and load up for the big haul back over the range and out to the ute, making up 11 hours hiking for the final day. It was great to look over several healthy stags and to see some very nice true wild genetics that inspire us all to keep pursuing our goals on public land.

Ready for more hills now, bring it on! 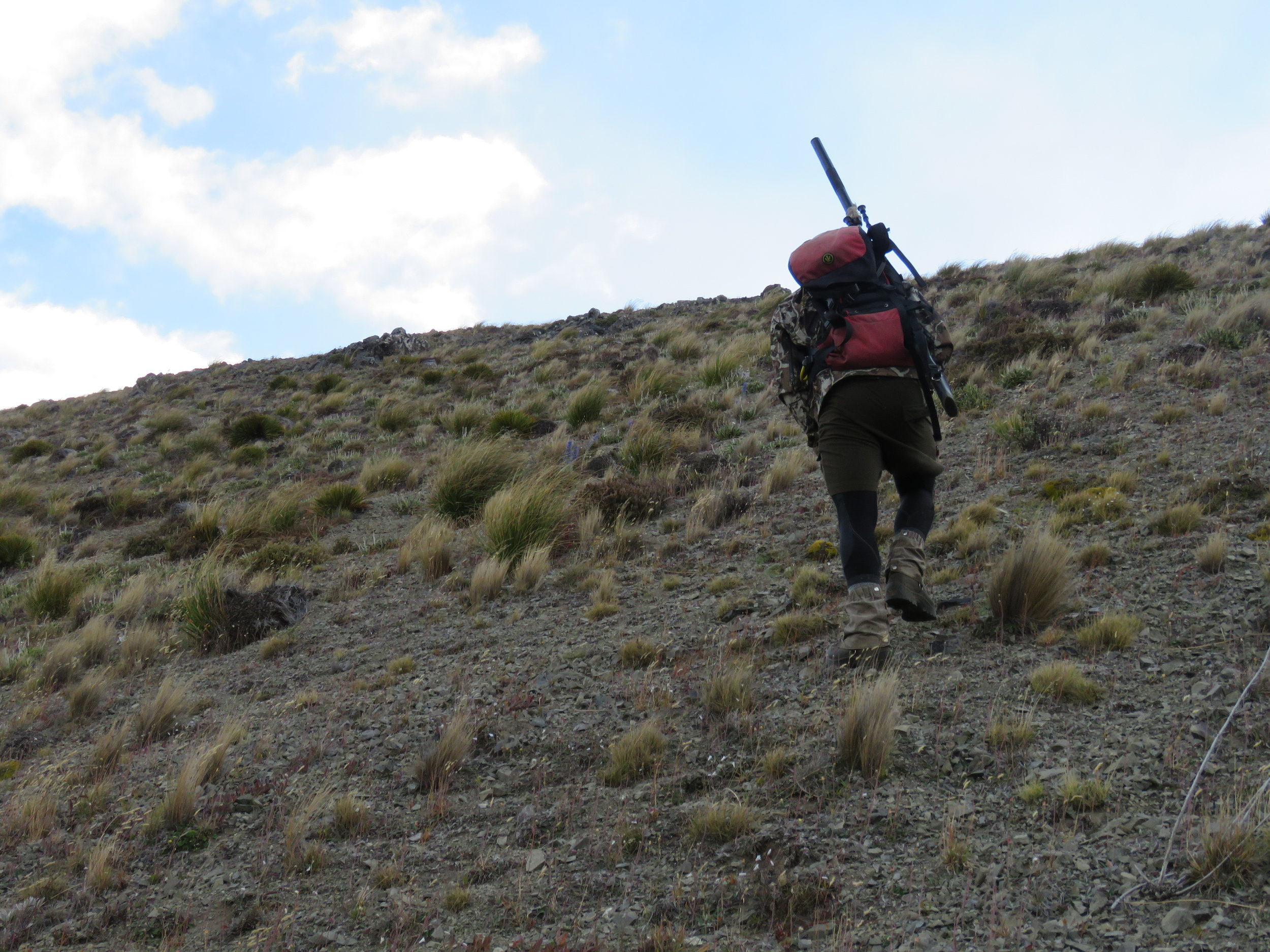 A great fitness training trip to start off the 2017 hunting season.

Here is the video report from this trip_