Both male and female chamois have horns and both can be considered trophies, but it can be notoriously hard to tell the difference sometimes.

If a buck is to reach that magical 10 inch mark it will need to be very close to it after three years of age, otherwise it will not reach the mark within its lifespan. This is because the hook of the horn is the greatest determinate of the horn size, and all things being equal it is genetics that determine the hook on bucks. Therefore, its important to recognise what is the likely genetic potential of the chamois in the region you are hunting. 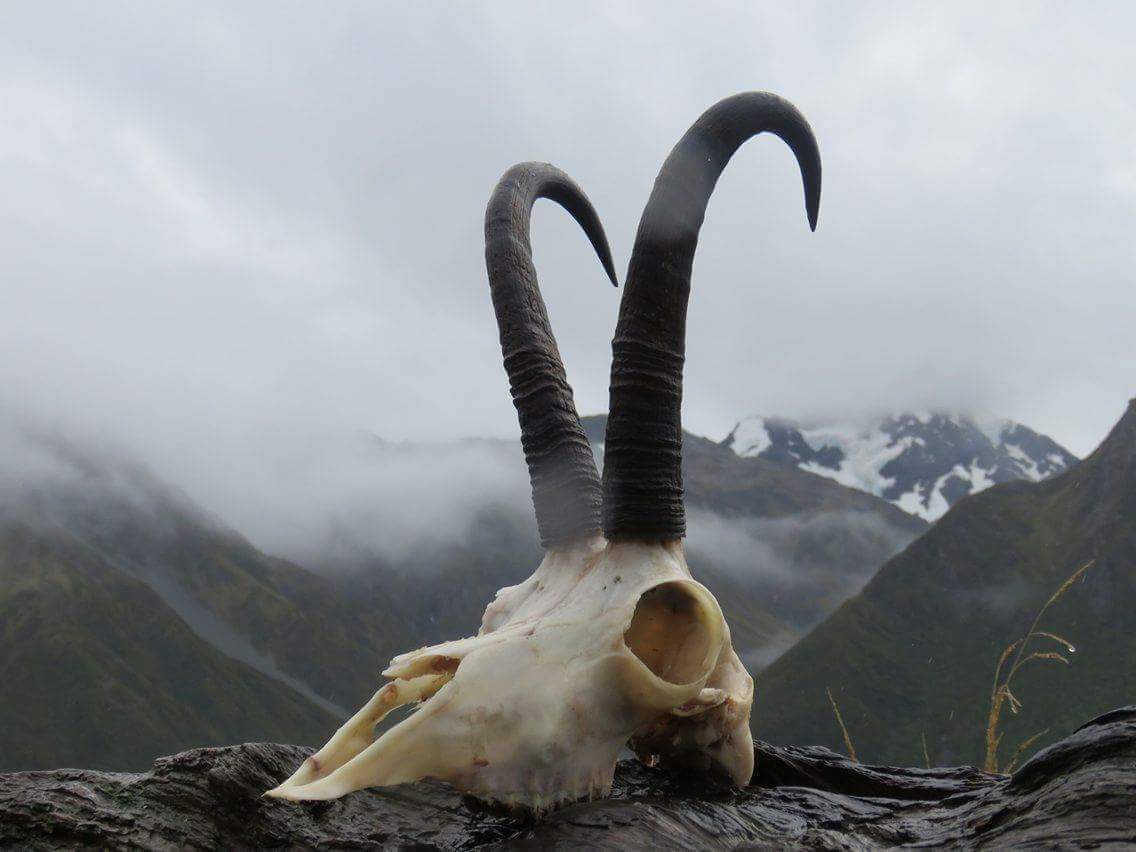 Mature doe’s can have some impressive horns also, with the New Zealand record for length currently being a doe. But typically, they will not have the hook and hence not the same length as a similar aged buck.  A very old (over 10 years) doe or especially a barren doe is considered a fine trophy in their European homeland. Taking a barren Doe doesn’t affect the breeding potential of a herd, which is important as chamois are very susceptible to hunting pressure. 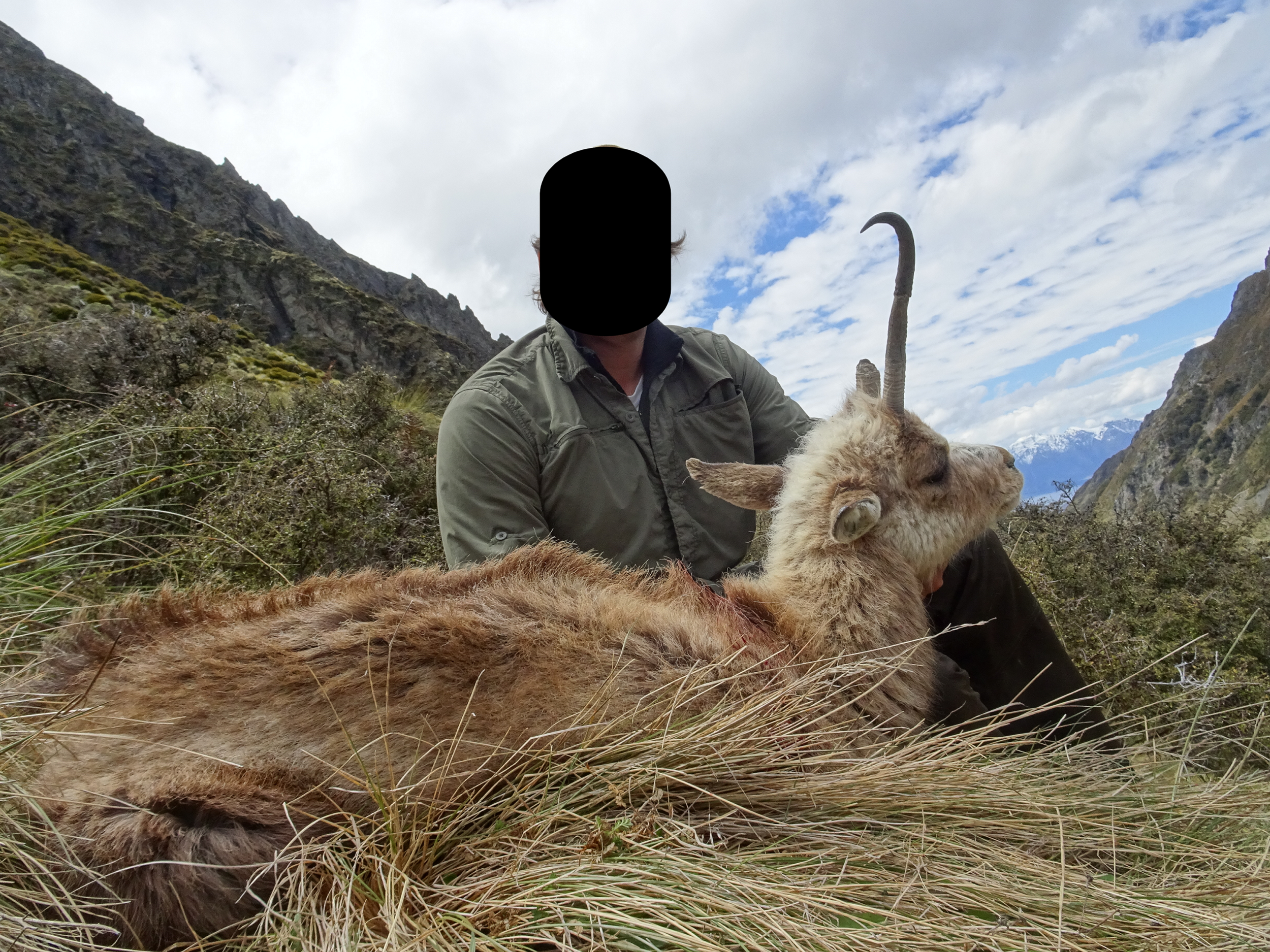 And that breeding potential of a female is the key reason why it is important, that hunters that care about the herd they hunt and need to learn how to determine the difference between a buck and doe chamois.  This time of year (August to October) when the nanny’s are moulting and becoming heavily pregnant, can be the hardest time to distinguish gender. And there’s a lot to be said for allowing them to settle into the best habitat for kidding/fawning. In other words just because we can hunt them, may not mean we really should be. From a taxidermy perspective, most animals (deer, tahr and chamois) are in the best condition for a mount/skin from early in the rut. 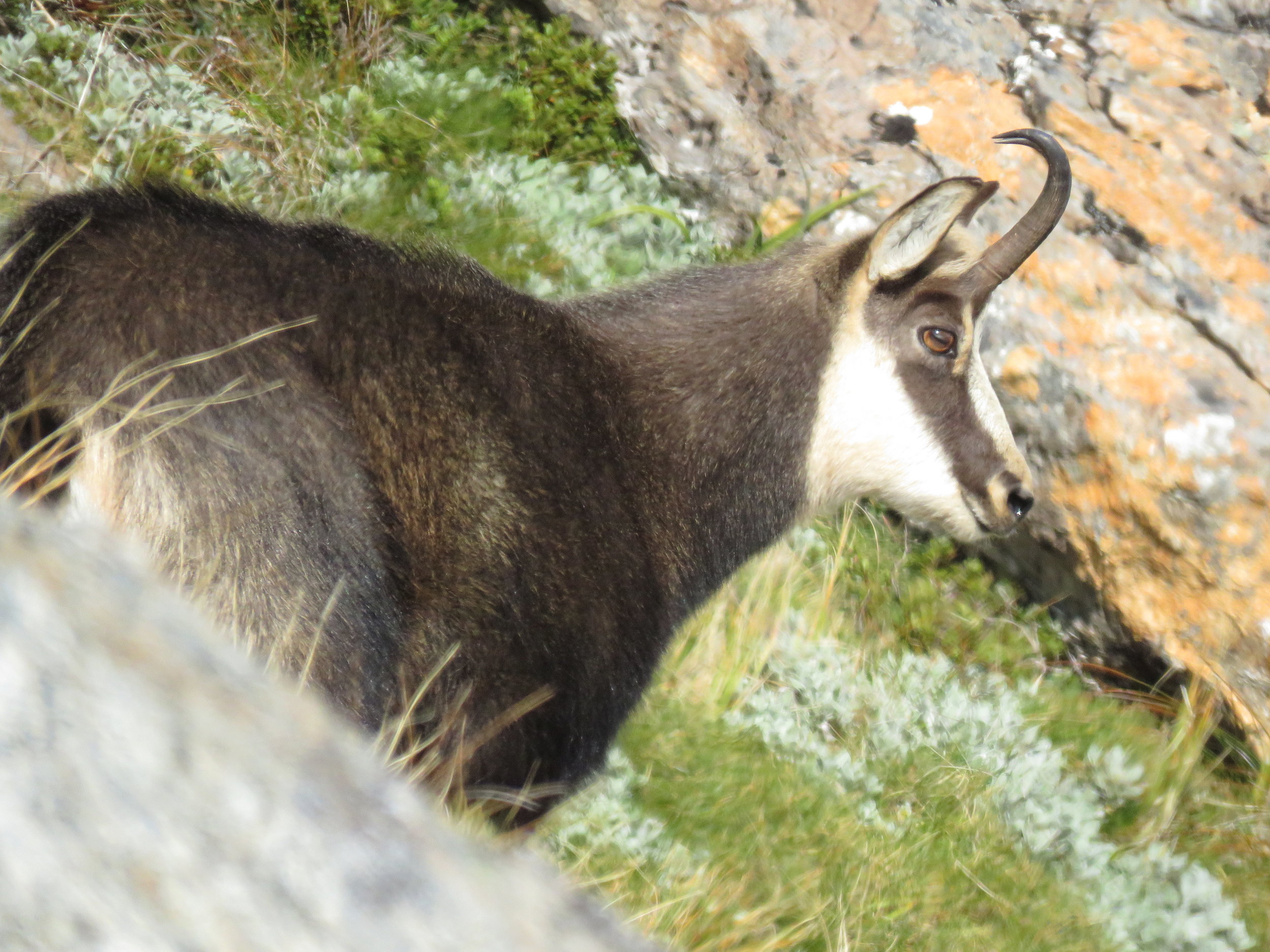 Female chamois can produce twins, and once the red deer where removed from the tops they thrived and spread throughout the South Island. Once it could be said that every hill over 3000ft held a small herd but today with increased hunting pressure, many isolated herds are very vulnerable to being lost forever. This is because man’s development of land has greatly reduce the opportunity for herds to re-establish, once removed from an area. 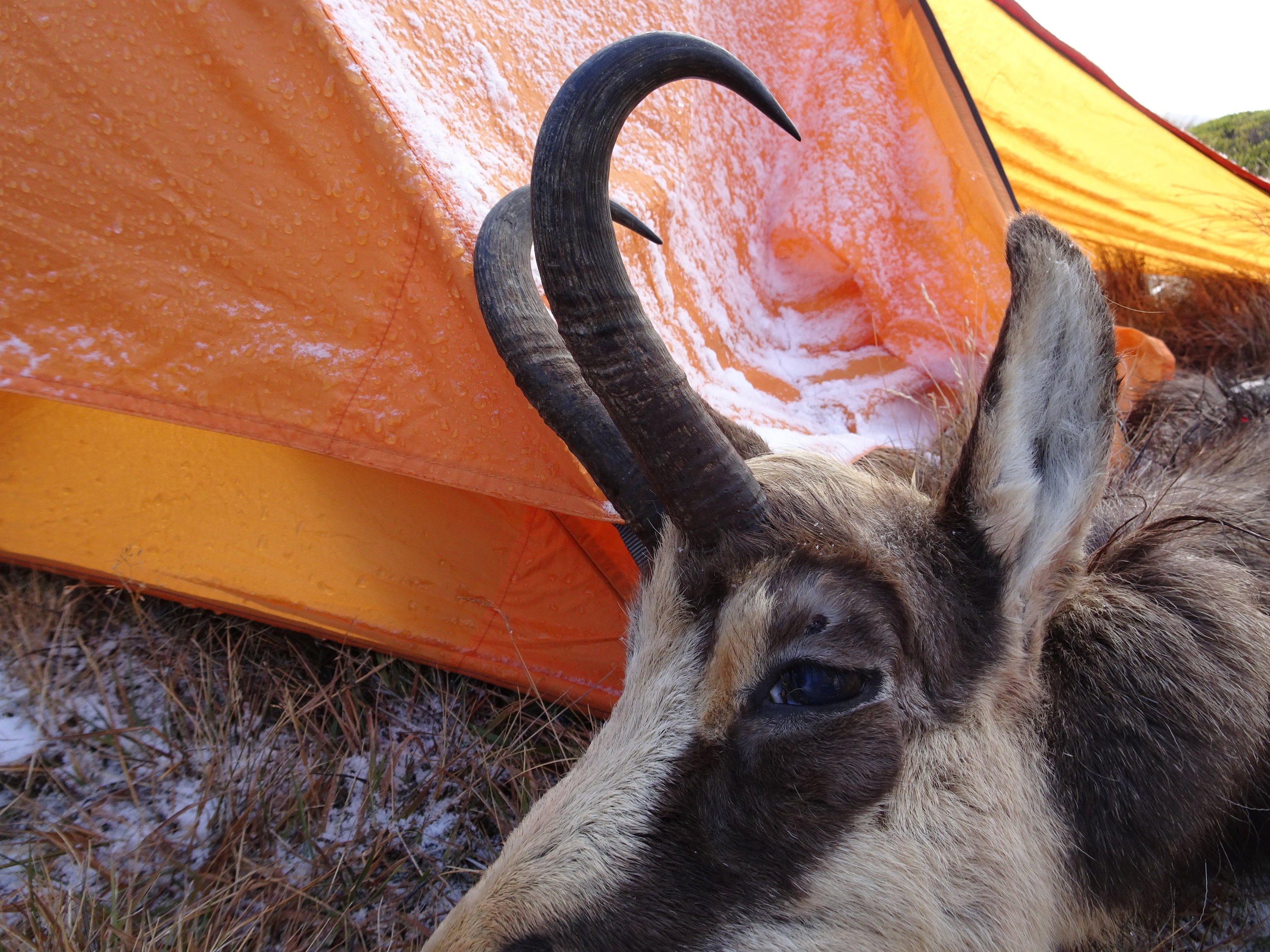 Further, red deer have made a comeback and along with tahr do not tolerate chamois. So, in areas in which they occupy the same habitat, chamois numbers are now reduced as the tahr population has increased, and chamois are less likely to thrive in the presence of increased deer numbers.

So, when you are hunting those small gullies that are the last stand of your local chamois herd, take care and take only what you need. The target species should be a mature buck. Leave the family groups undisturbed and you will have a lifetime of hunting bucks in that herd. 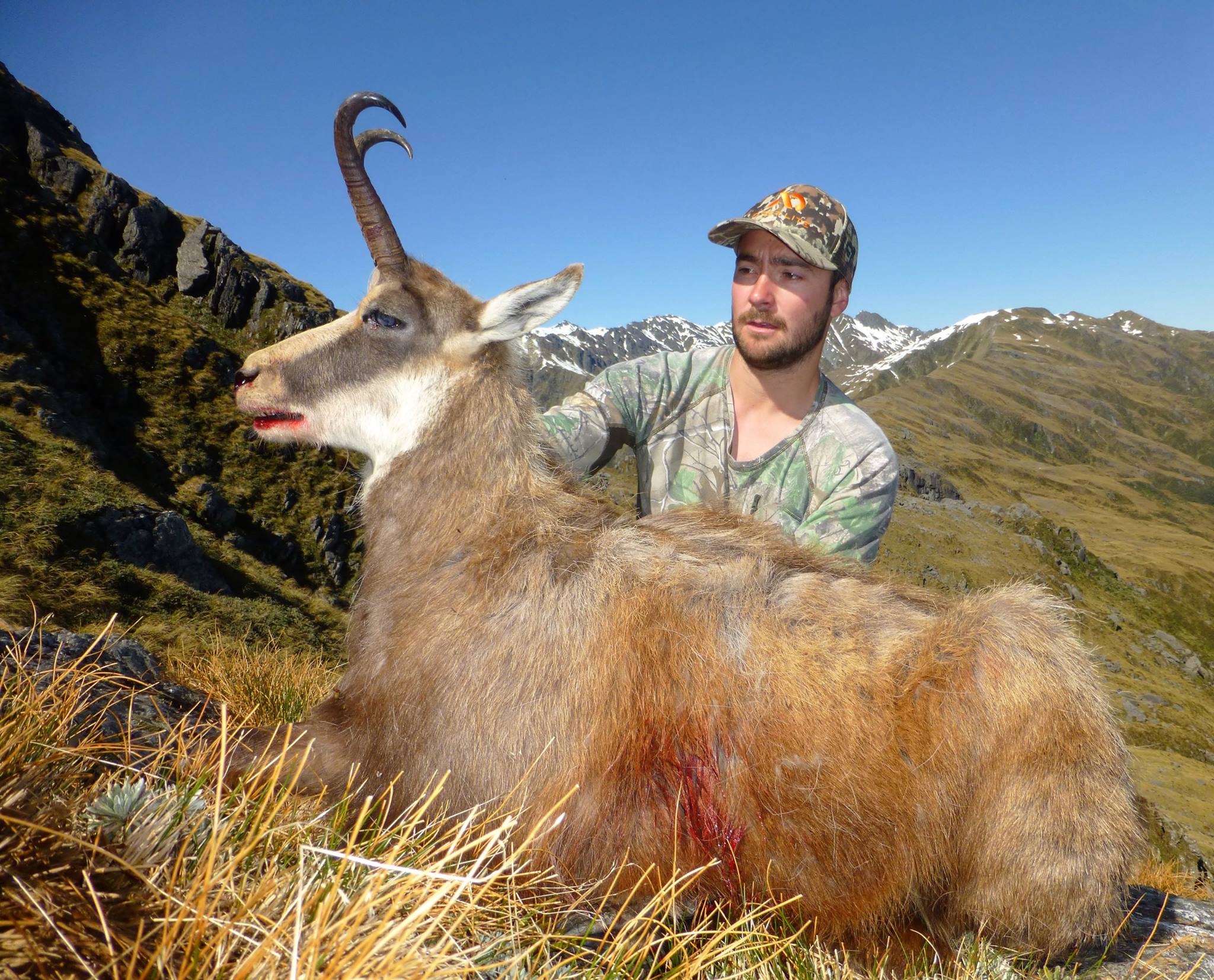 So how do you tell the difference between a buck and doe?

It’s sometimes not easy to work out if your looking at a buck or just a very butch old doe, but with a little basic knowledge mistakes can be avoided.

Below are some rules of thumb, best coupled with a good spotting scope, patience and experience.

Recently we posted a couple of pictures on social media asking if people thought the chamois pictured was a buck or a doe, only 50% picked it correctly and there were some very experienced hunters getting it wrong.  Admittedly we deliberately choose an image where the animals in those pictures, probably weren’t the easiest to work out and not disclosing the month or location made it harder still. As always with just a picture you don’t get to watch the animal’s general behaviour, so hence the motivation for this article is to share a few tell tale things to look for. 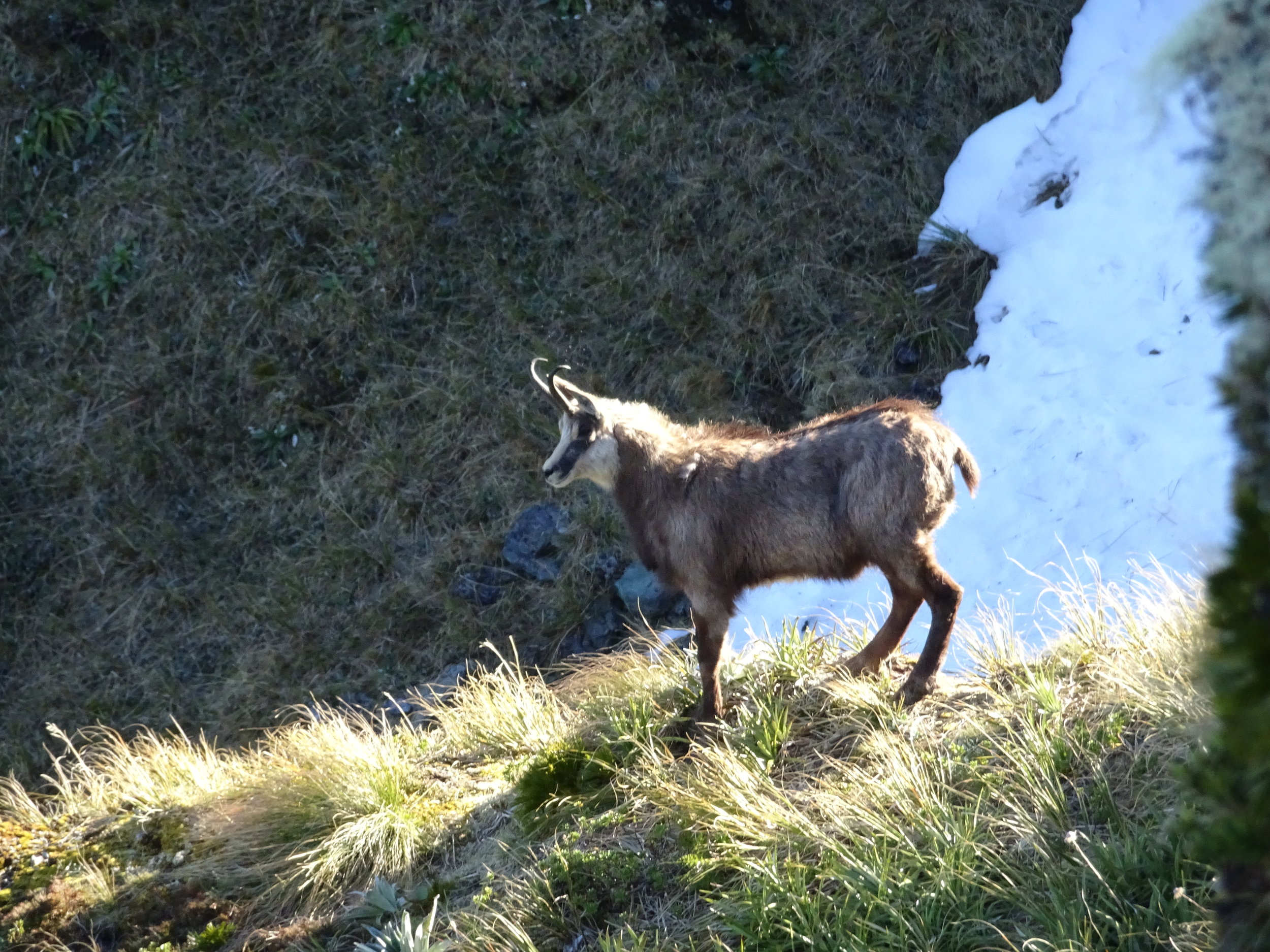 The photo that started the topic. This is an old female, and a good example of how easy it is to get it wrong. Upon first look with the end of season coat the dorsal hair is enhanced and she has a good hook to her horn. The give away is the lack of a visible pizzle against the snow background. She would most likely be heavily pregnant at this time of year and hence looks in good condition. image @ PointsSouth

Typically bucks have heavier horns and more hook, and females less mass and very little hook, but to throw a spanner in the works, some does have doe horns (no hook) and some does have good hooks. So, if you know what is typical for that region you will know what trophy potential  is.

Buck on left and doe on the right for comparison. Image @ Tim Butcher

Its no secret the best clean heavy horn chamois come from Hamner Spring North, and Westland also produces some phenomenal horn grow and good hook, although subject to horn rot.

The most obvious thing to look for is a pizzle, if you can see balls or a pizzle through the bino’s or spotter then there’s no question. During the rut the area around a bucks pizzle will often have quite a yellow stain, and the pizzle is easy to see if the animal is against snow or on the skyline (have another look at the above).

Bucks do also tend to be bigger bodied, although body size can vary substantially from area to area, so this can get a bit confusing. I’ve shot bucks that you could throw over your shoulder like a handbag, and in other places bucks that must be nudging 50+kgs

A buck in his winter coat will tend to have more length in dorsal hair down the back, and in general a bucks winter coat is a bit heavier than a females. 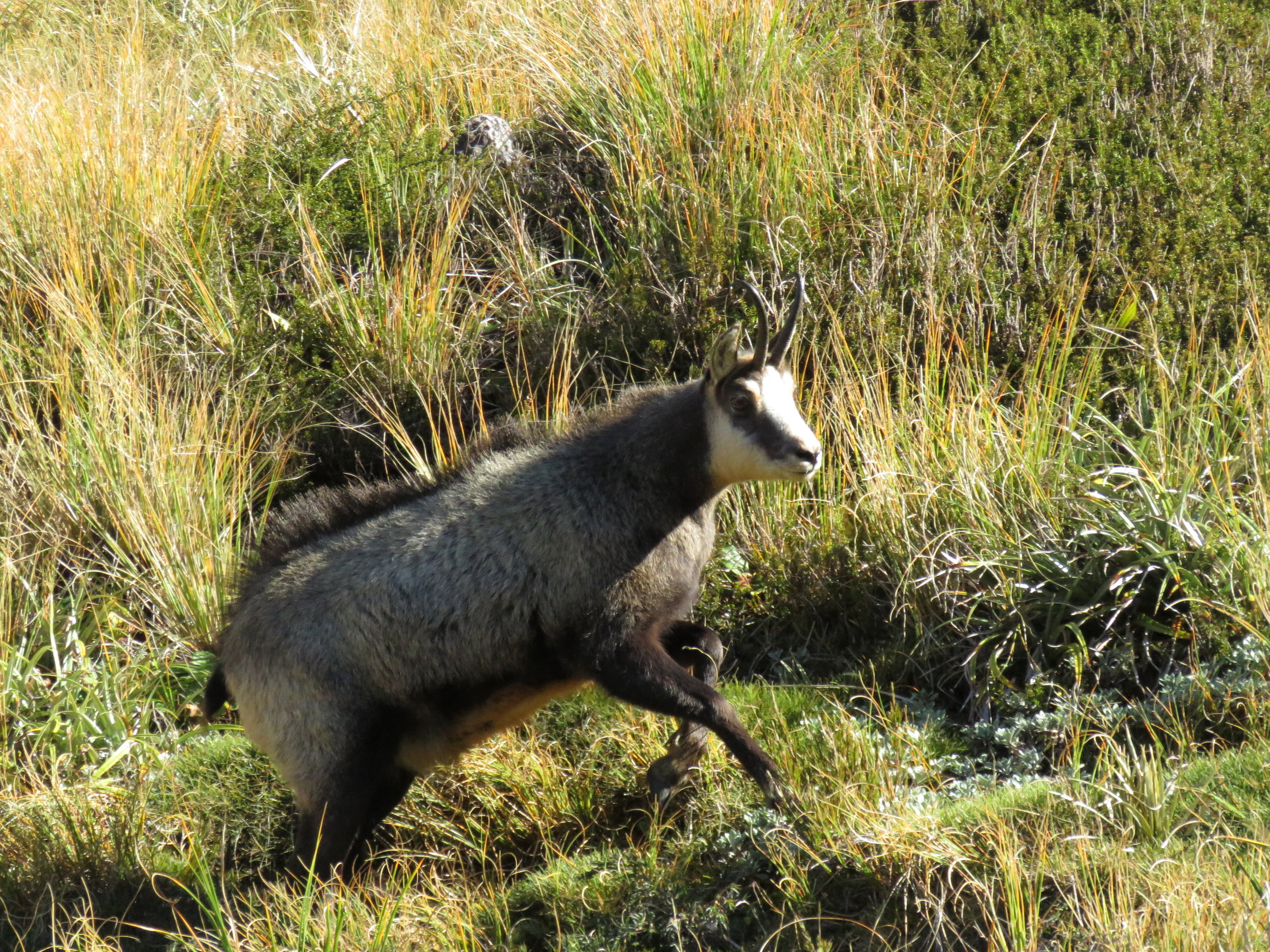 As with any game animal their behaviour changes seasonally with the most significant activity being around the rut.

The chamois rut is later than deer and shorter in duration than tahr.  Usually running from late April to end June (in some regions July) Both ends of the rut will see bucks exhibiting different behaviour. At the start they spend more time marking their territory and looking for female family groups. Yet in the height of the rut it’s madness and fun to watch but often unpredictable to hunt, so a really exciting time to be in the hills with bucks often getting run off by another buck. At the tail end of the rut bucks are often are still hanging around as the females dominate the best winter feed areas.  By late July/August mature Bucks have moved off, and the nannies then push away the young bucks before kidding.

Both female and male chamois have glands behind the horns they use too “sent mark” by rubbing those glands on vegetation. In the rut a bucks glands enlarge significantly often to the point that from a distance the horns will look shorter, they will rub these glands quite often, and this marking behaviour is frequently done by males during the rut. 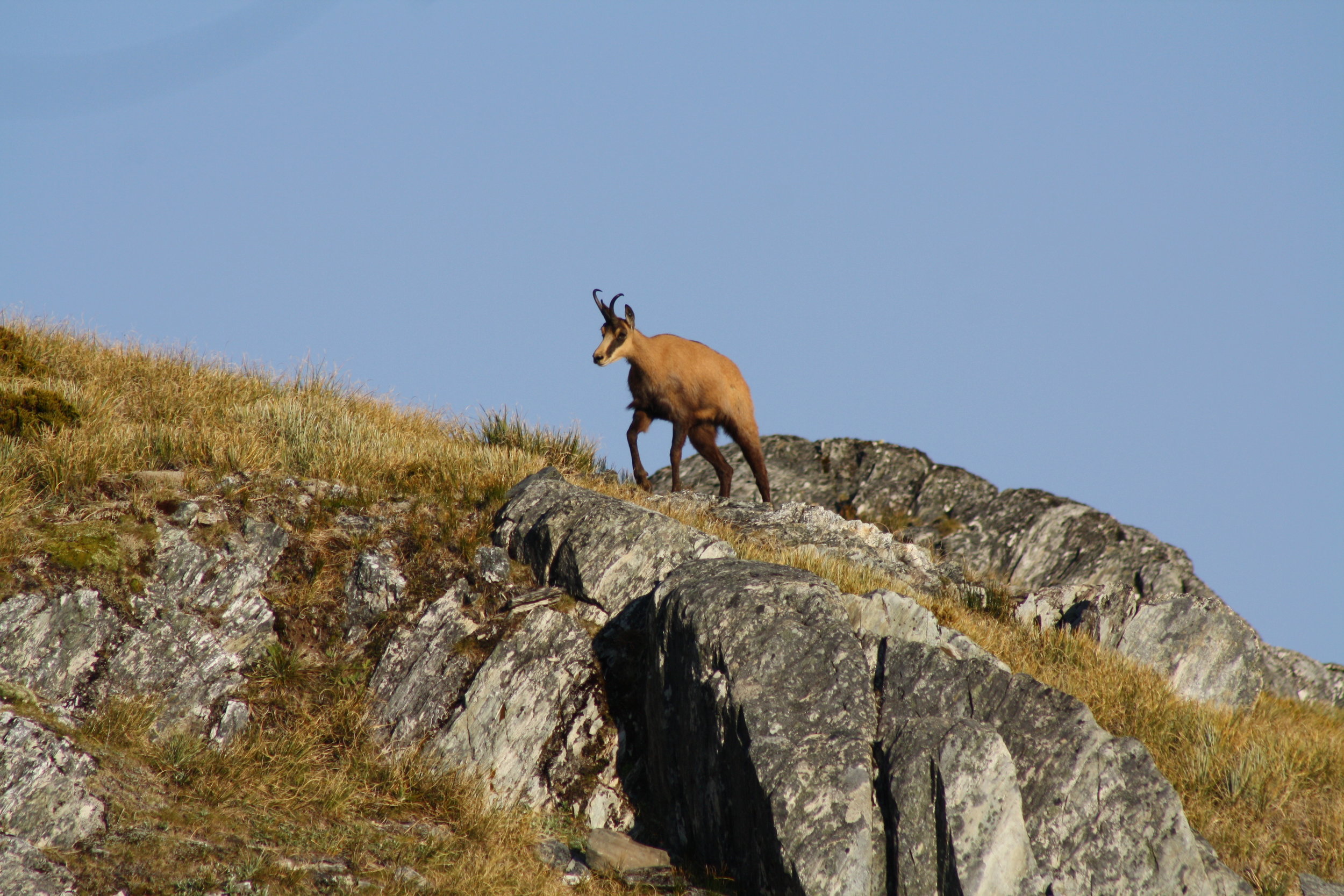 In summer just like bull tahr chamois group up in age similar cohorts. Except however mature bucks, who have no mates alive and barely tolerate younger bucks, often chasing them off. So, often a couple of young bucks will be seen hanging out together and yes if an animal is spotted travelling solo it’s usually worth having a better look. But it could be a nanny about to kid if early spring.

Today unfortunately, to see two mature bucks anywhere near each other than during the rut is far from likely.  During the spring and summer, the bucks are where you find them so hunt high and low. 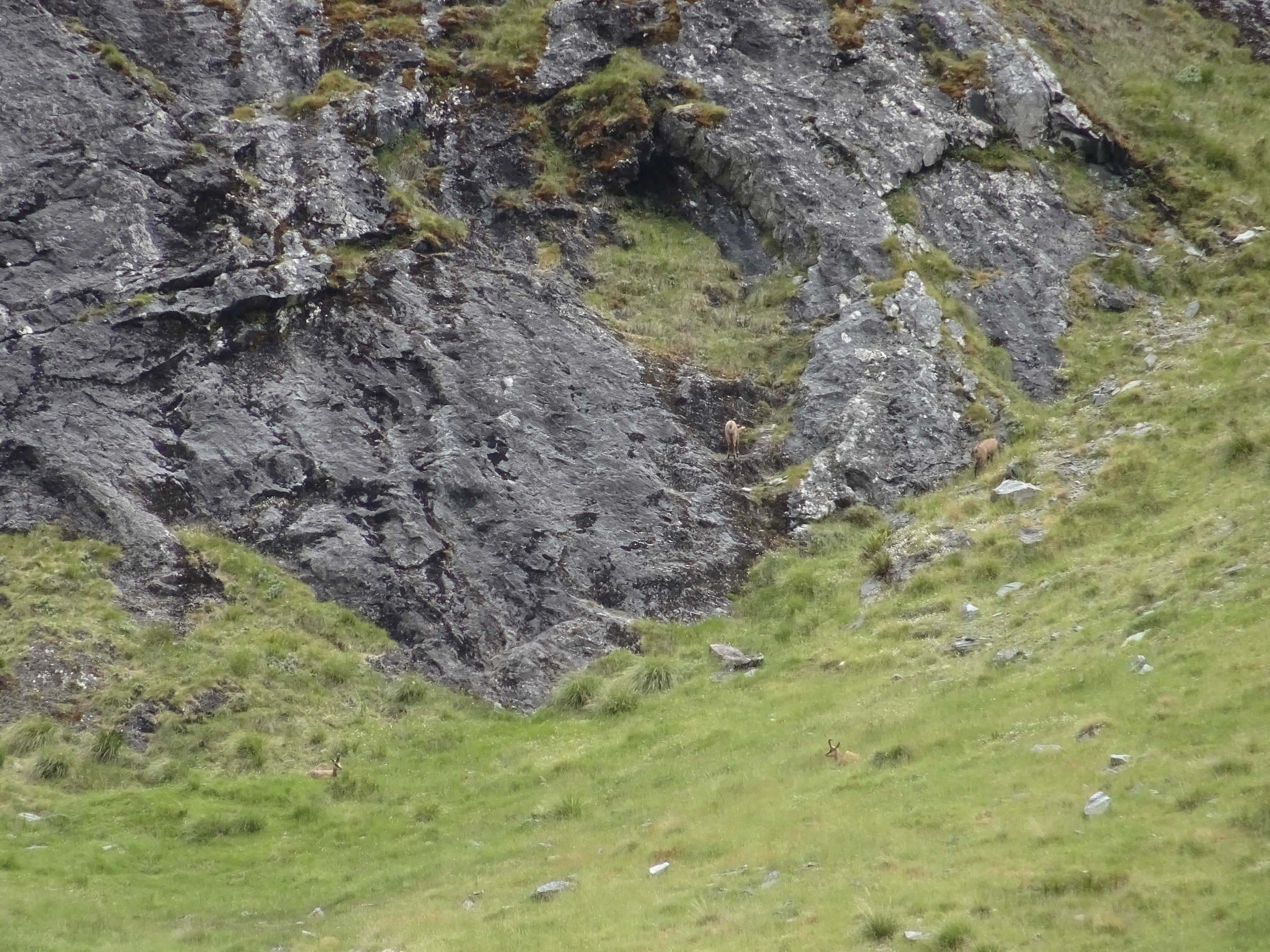 Typical family group scene. Two does bedded down and the two young one mincing around above. Image @ PointsSouth

Doe’s will hang out in family groups consisting of kids, yearlings and other mature females. So, if you’re looking at a group of animals and it’s outside of the rut, take note and come back during the rut. There will be bucks somewhere so keep walking and spotting.

Another great way to confirm what your looking at is to just keep quietly watching until the animal squats to pee, then you know it’s a female. They will often do this when there alarmed or aware of your presence. 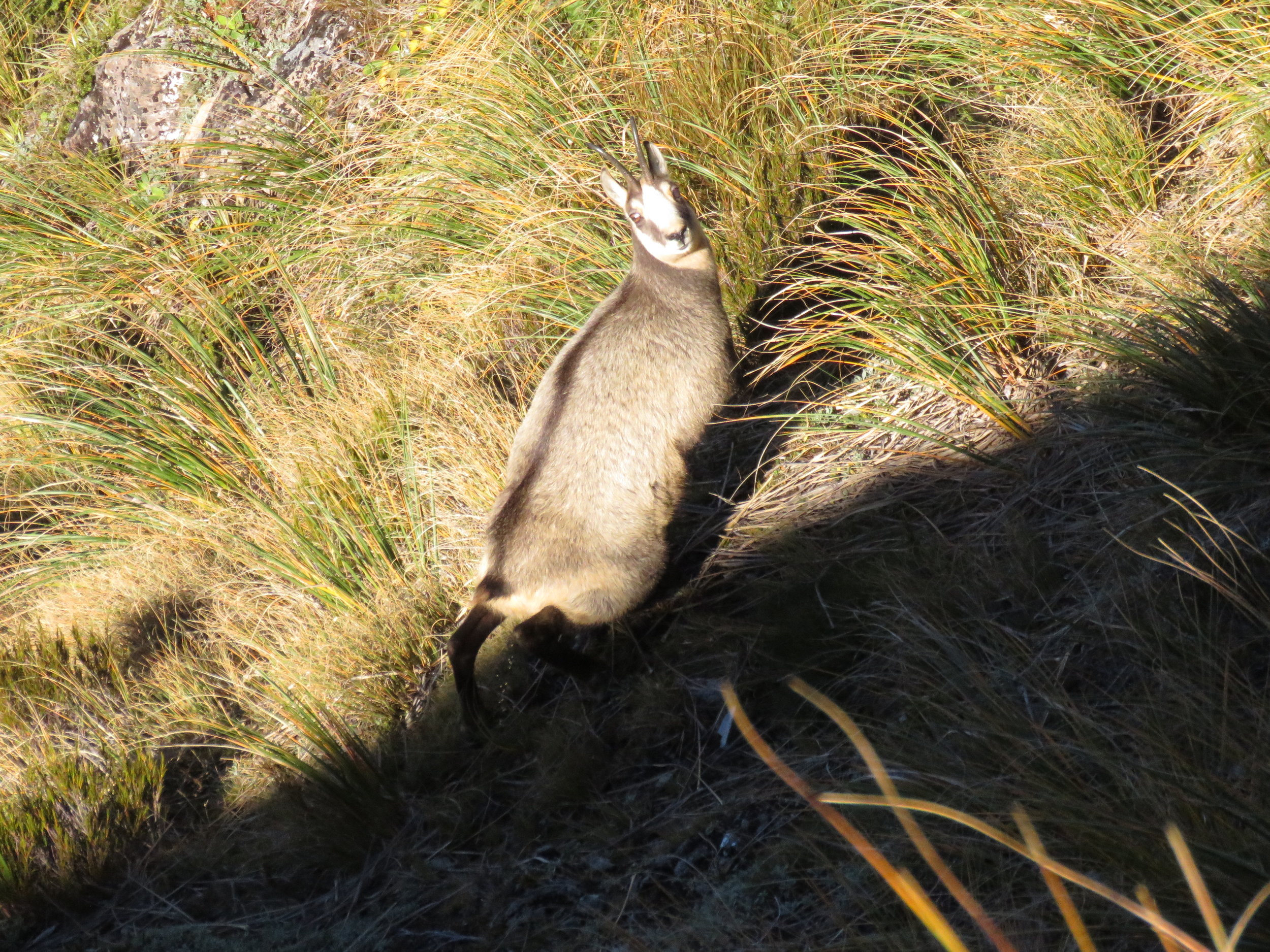 No question as to what this is. Image @ Shaun Monk

An alarmed buck will spark up like its electrised, making the dorsal hair stand up. Its much longer than a females, and on the rear up to ten inches long on a buck in prime condition. 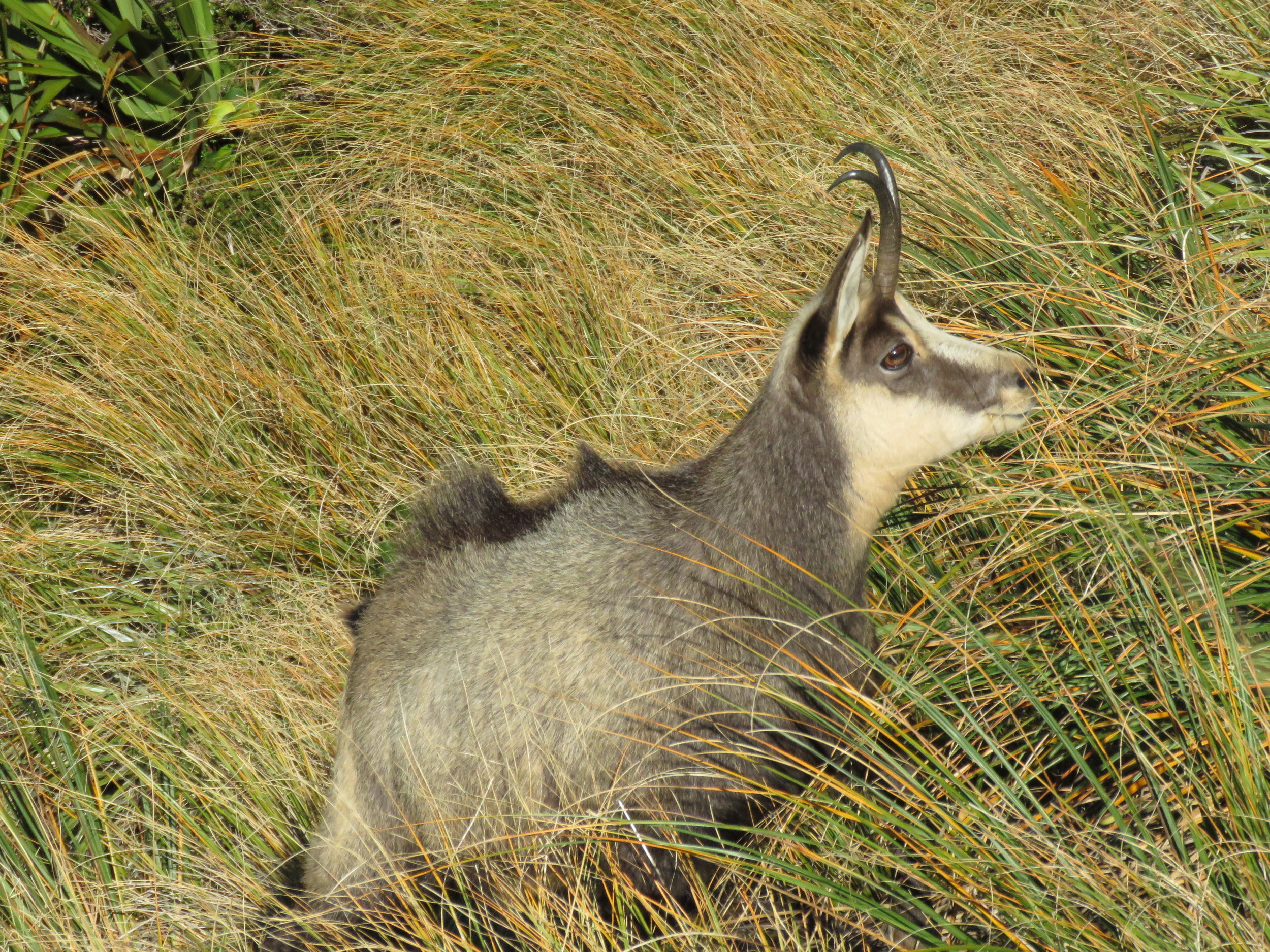 This is a doe, but note how prominent the dorsal strip still is. Image @Shaun Monk

During the rut it’s usually quite easy to pick out the buck by the way he is strutting around sniffing the does, or quite often running about chasing off other bucks. This is always really entertaining to watch. 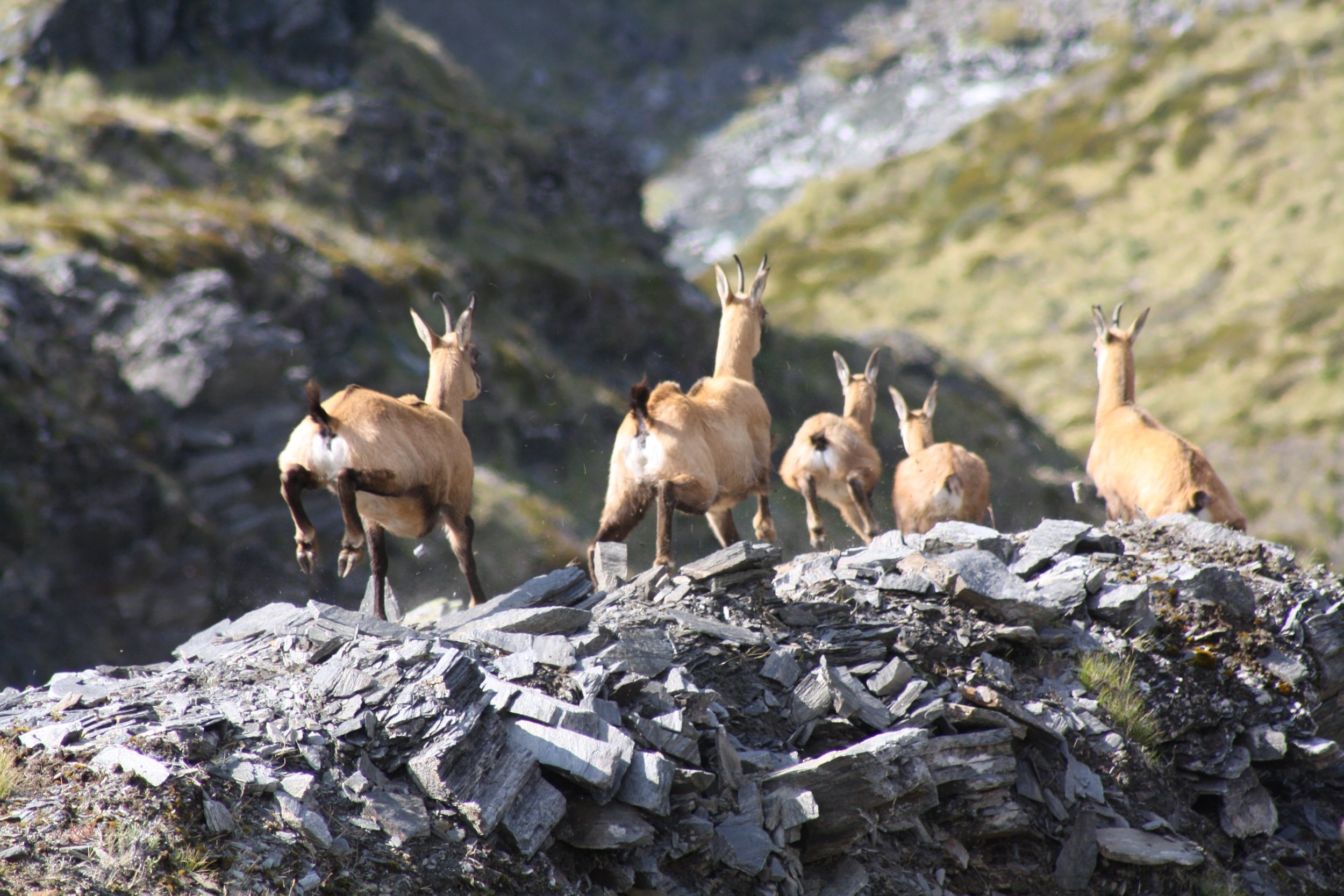 All the above is fine and good if you’ve got the time to watch and figure things out. A snap shot at a fleeting “buck” is often when mistakes are made. It’s never smart to shoot at a running chamois, you will no doubt miss and they will not stop until they are in the next catchment. During the rut they will often come back the next day, sometimes minutes later. If a buck runs, more often than not they cannot resist to stop and then look back at what they are running from. Track him in the scope (you might see his nuts) and if confident with the range and you have a good rest, then use this split second to take the shot.

Hopefully the above pointers will make a few people more able to determine the sex of chamois, but there is no substitute for hill time on your arse, wearing out your eyes not your boots. 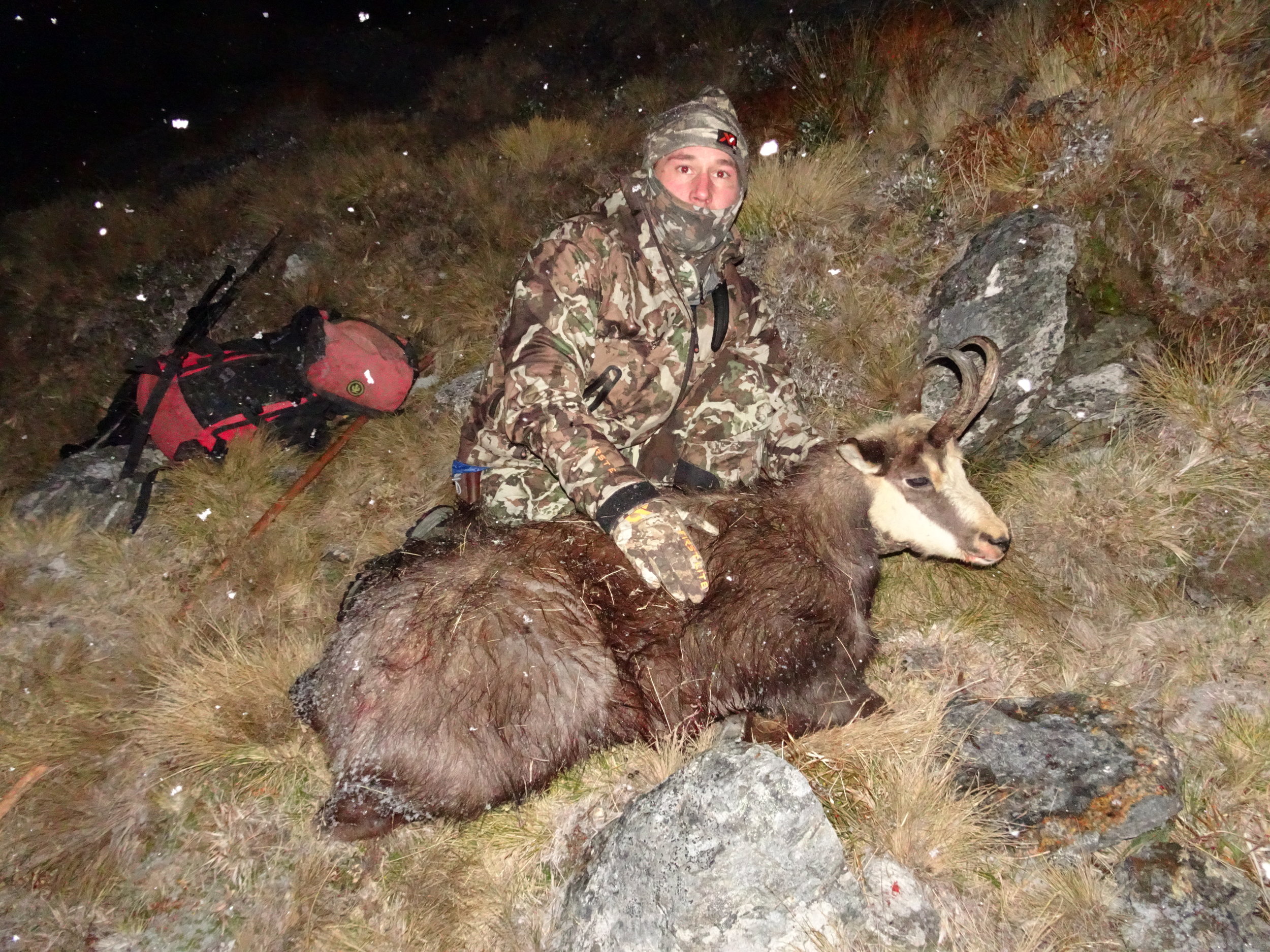 David Jacobs is forth generation taxidermist, and co-writer of this article