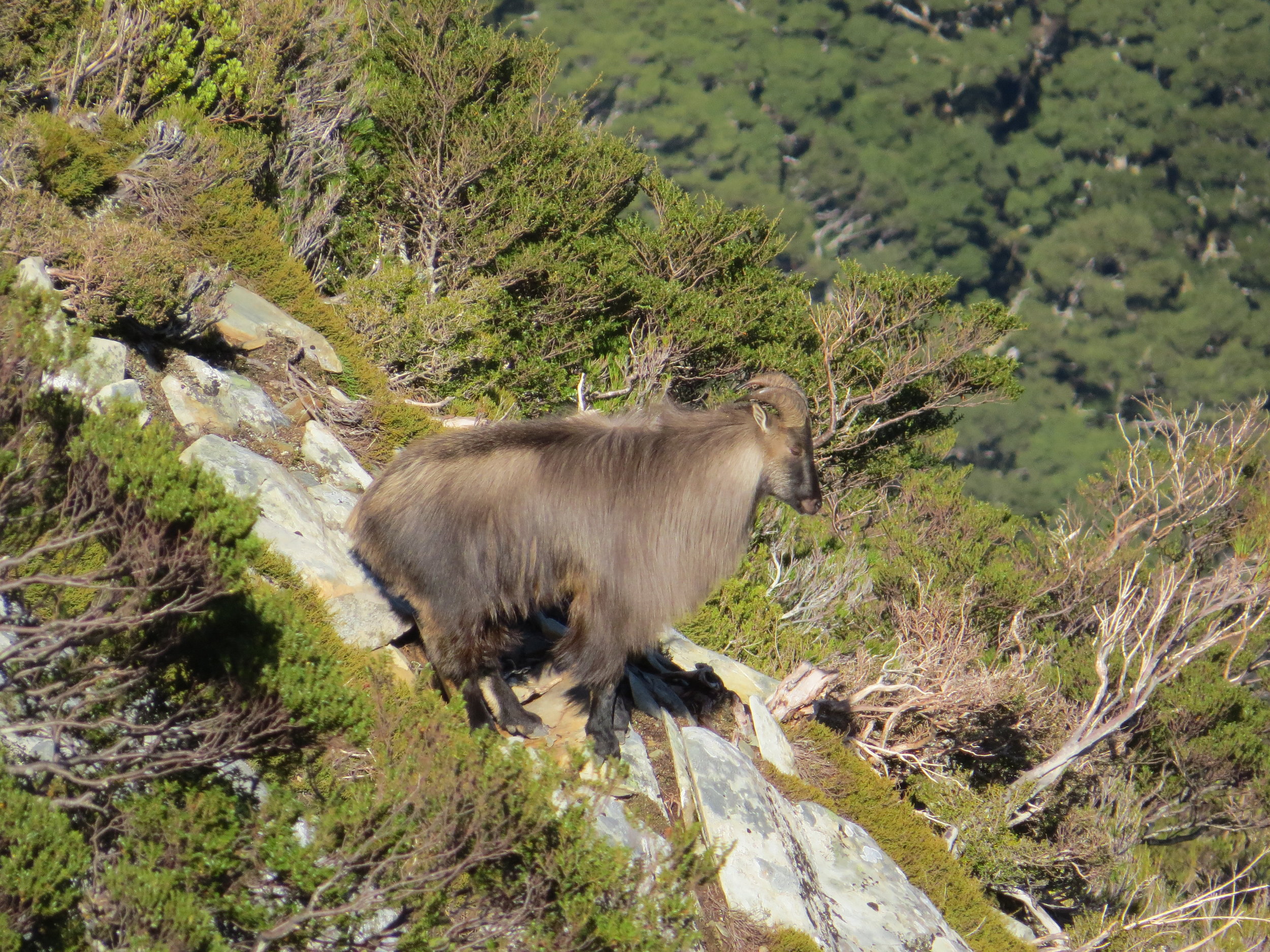 I hadn’t drawn a wilderness tahr ballot landing site in the last few years but my luck changed in 2016 with a Landsborough River allocation in the 4th period, smack on the start of the bull tahr rut. The majority of the Westland tahr season was plagued with foul weather, however we fluked a 6 day fine spell starting on day one of our trip. We arrived at the Alpine Adventures helicopter hanger early and secured the first taxi ride of the day.

Being an old man with a bung leg I decided to hand-pick a super crew of hard core hunters to make me look good in this write up and video, it worked! This super crew was made up of Richie Williams, a guy that I’d call a true trophy hunter and a couple of very fit high country farming lads, Luke Potts and Ryan Carr, who work hard on the hill and are a severe hazard to big game animals.

Ryan and Richie took light back pack gear and heli-dropped in to a high landing site, while Luke and I set up a lower base camp and hunted from the Landsborough valley floor. Being a bush landing site it was easy to pitch a good secure camp under the beech trees. Using a few blue tarps, a portable log burner stove and some ply table tops we soon had a very spacious and snug mountain cabin. The grassy heli-landing terrace was perfect flat ground for our dome sleeping tents. 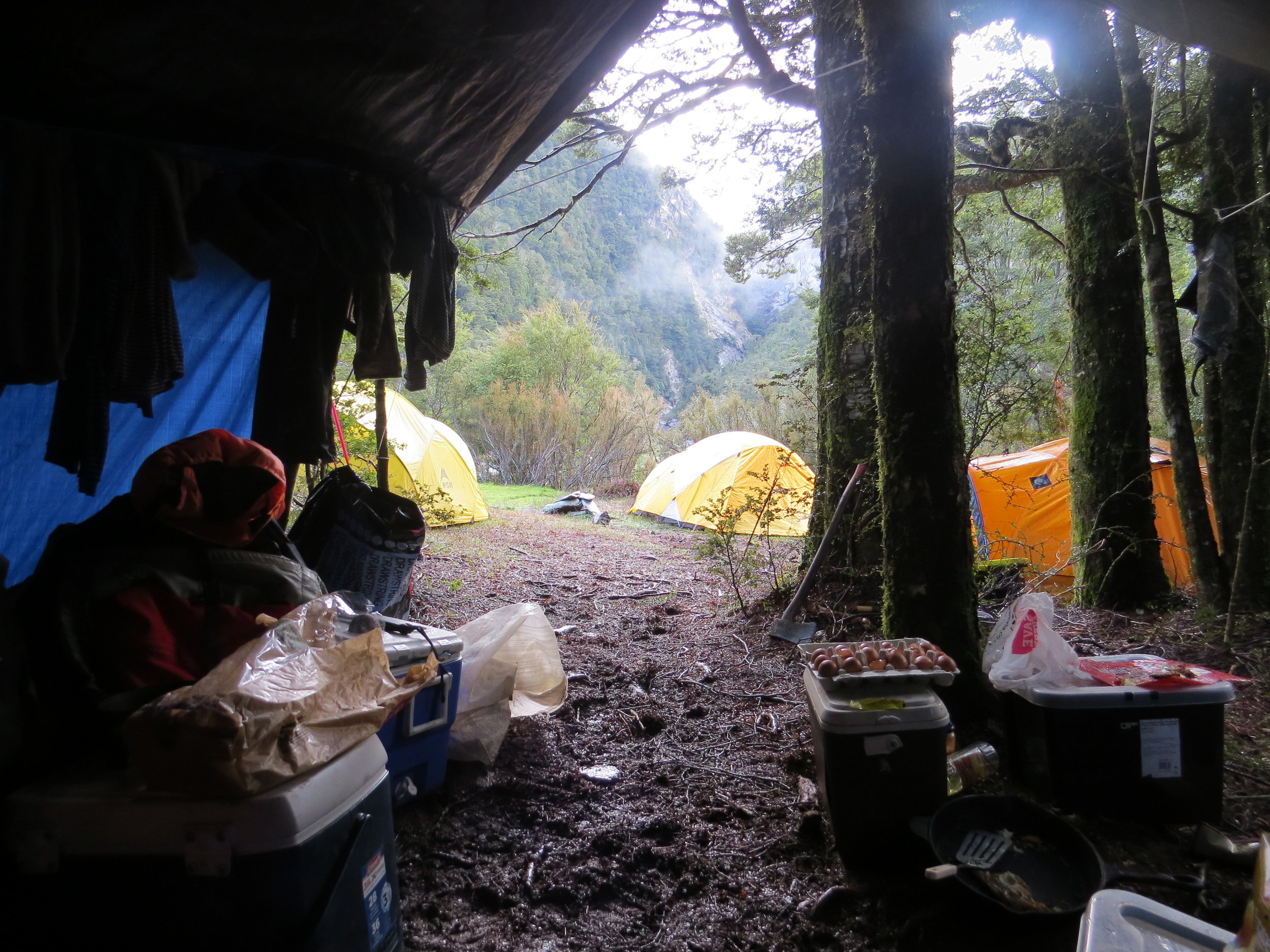 Base camp - Photo by Ryan Carr

Once set-up Luke and I had time for an afternoon stroll straight up through the bush, climbing hard to break out under some likely slips. We bumped into a few tahr in the beech forest along the way, but they were a bit fast moving for us to get a decent look. The amount of tahr sign under the beech canopy was very high so it seems they spend as much time in the bush as they do on the rocks.

From the moment we could see up into the scree we immediately spotted a bull tahr. We found a good lookout and cranked up the spotter for a decent look around. There wasn’t too much activity on our side of the creek, but there were plenty of mature bulls chasing nannies around all through the slips opposite us. With an impassable gorge blocking access we just had to watch for a couple of hours and figure out a route into the tahr slips up the other side of the creek for next morning. 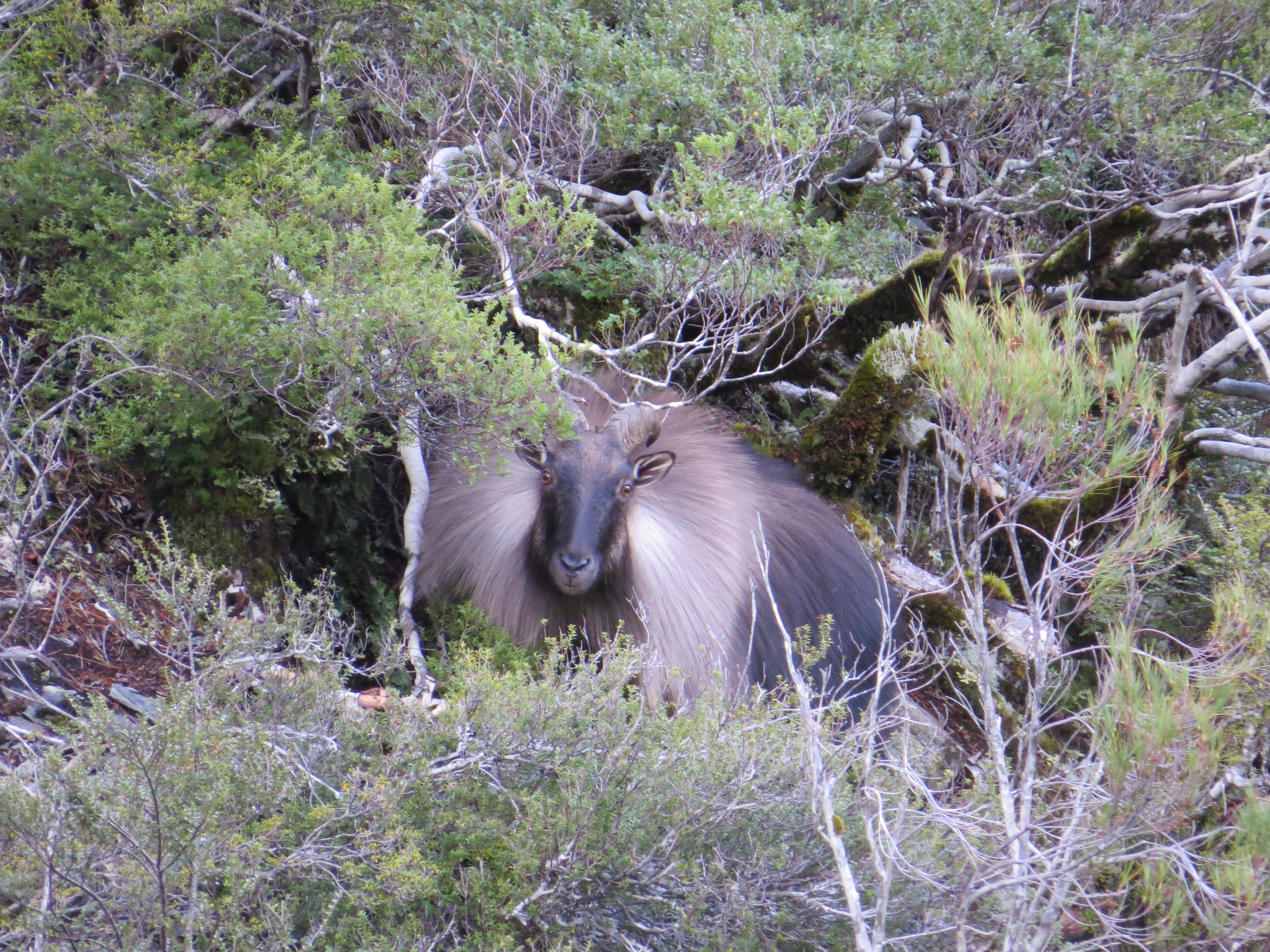 As the evening closed in a few shots rang out way up above us signalling that Ryan and Richie were having some luck. It seemed the upper landing site was well covered with fresh snow and not many tahr were hanging around in the open bluffs due to the recent bad weather. They had decided to move down the creek and climb around into the scrub zone and that’s where they really started seeing plenty of tahr. Ryan secured a nine year old bull with 12 inch horns and they knocked over a few nannies while the barrel was hot. They backtracked to the main creek bed to camp the night then in the morning picked their way back through the bluffs to make their way out onto the ridge tops. There was only a lone young chamois hanging about on the tussock, so they hunted down through the bush over the day and made their way back to the base camp by sundown. 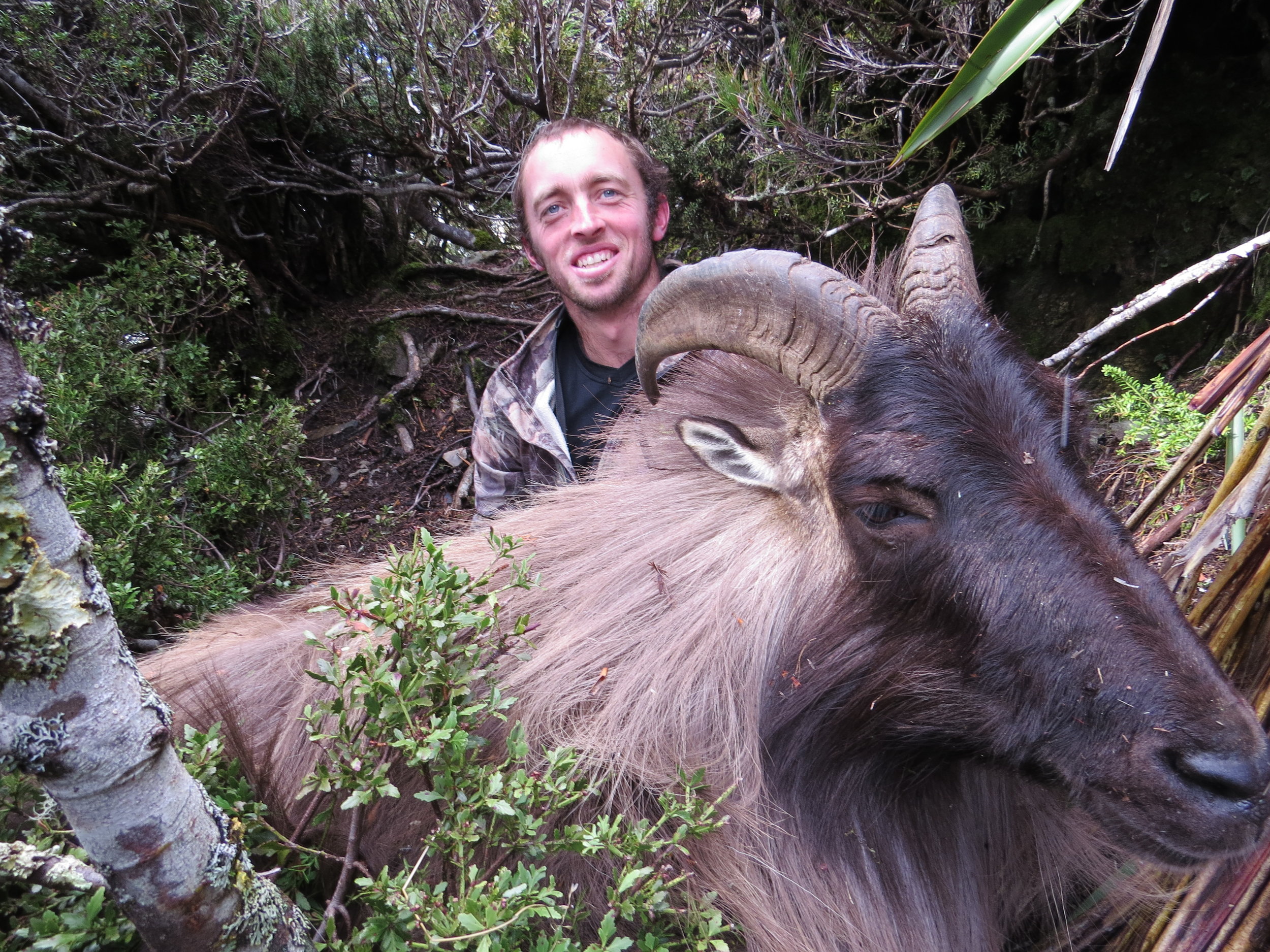 Ryan Carr with a 12 inch bull - Photo by Richie Williams 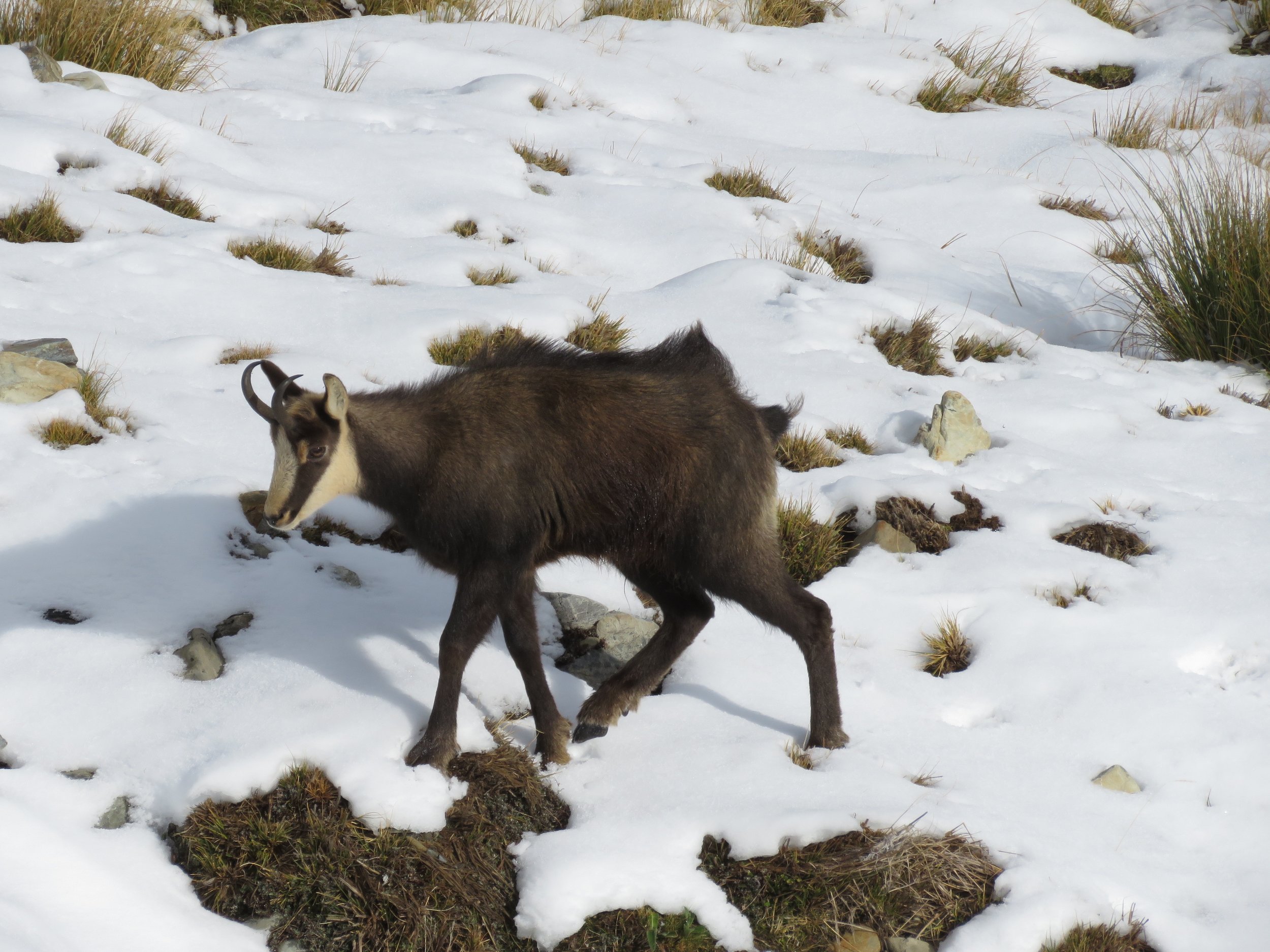 Meanwhile Luke and I had climbed for a couple of hours up through the beech and stalked in on the big bare rock slips where we’d spotted all the tahr the previous evening. They were still there and they were in good numbers. We looked over several bulls and none were monsters although both of us had intended to take full winter skins for floor displays. The shooting of these rug bulls was the easy bit. With every tahr that you spooked, it seemed another five would pop out to see what was going on, so Luke and I soon downed a hairy bull each. The recovery was the tricky part with a bit of rock shimmying required, but we made it safely to both animals, skinned them out and set back for camp with very heavy loads. 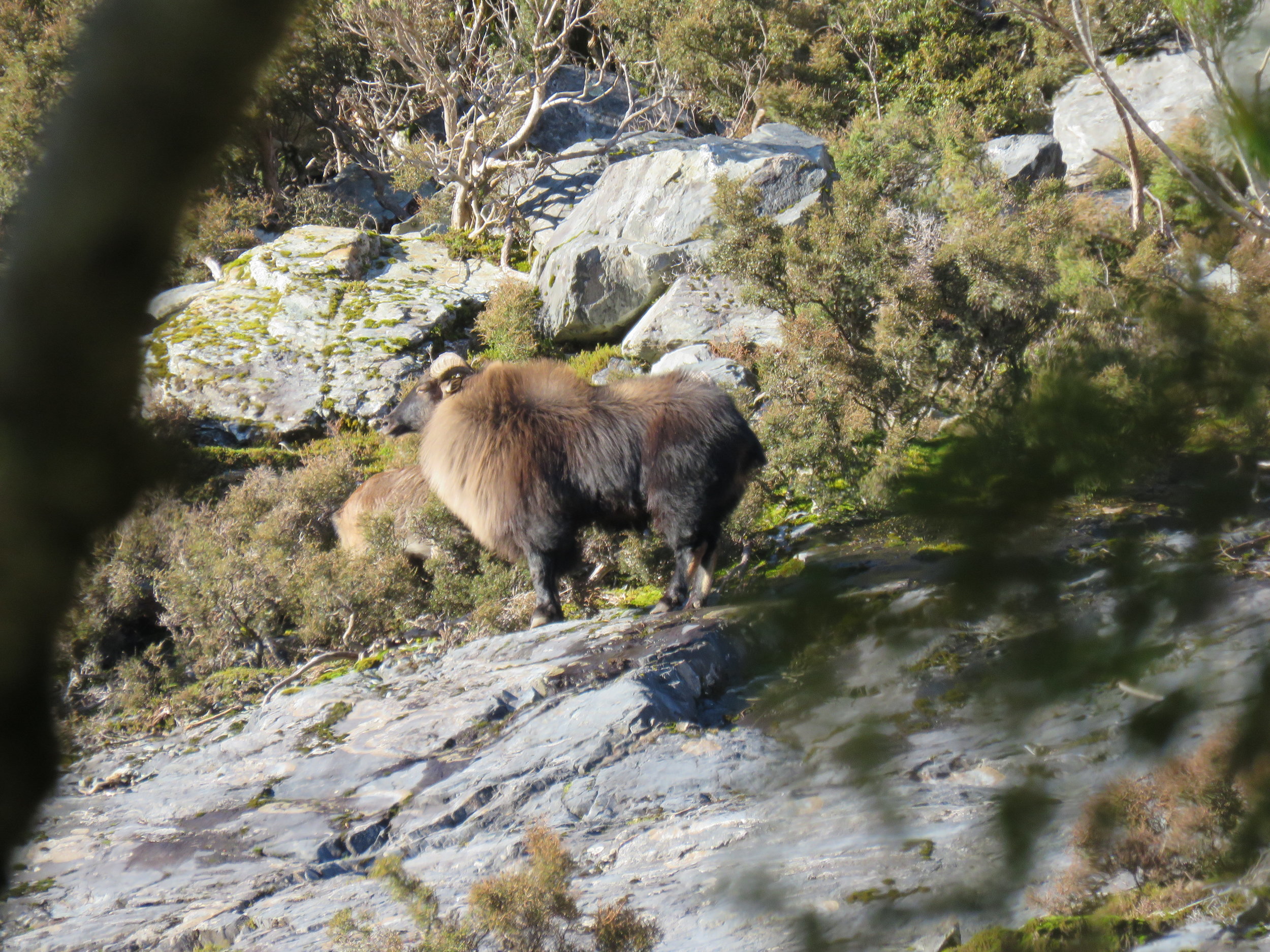 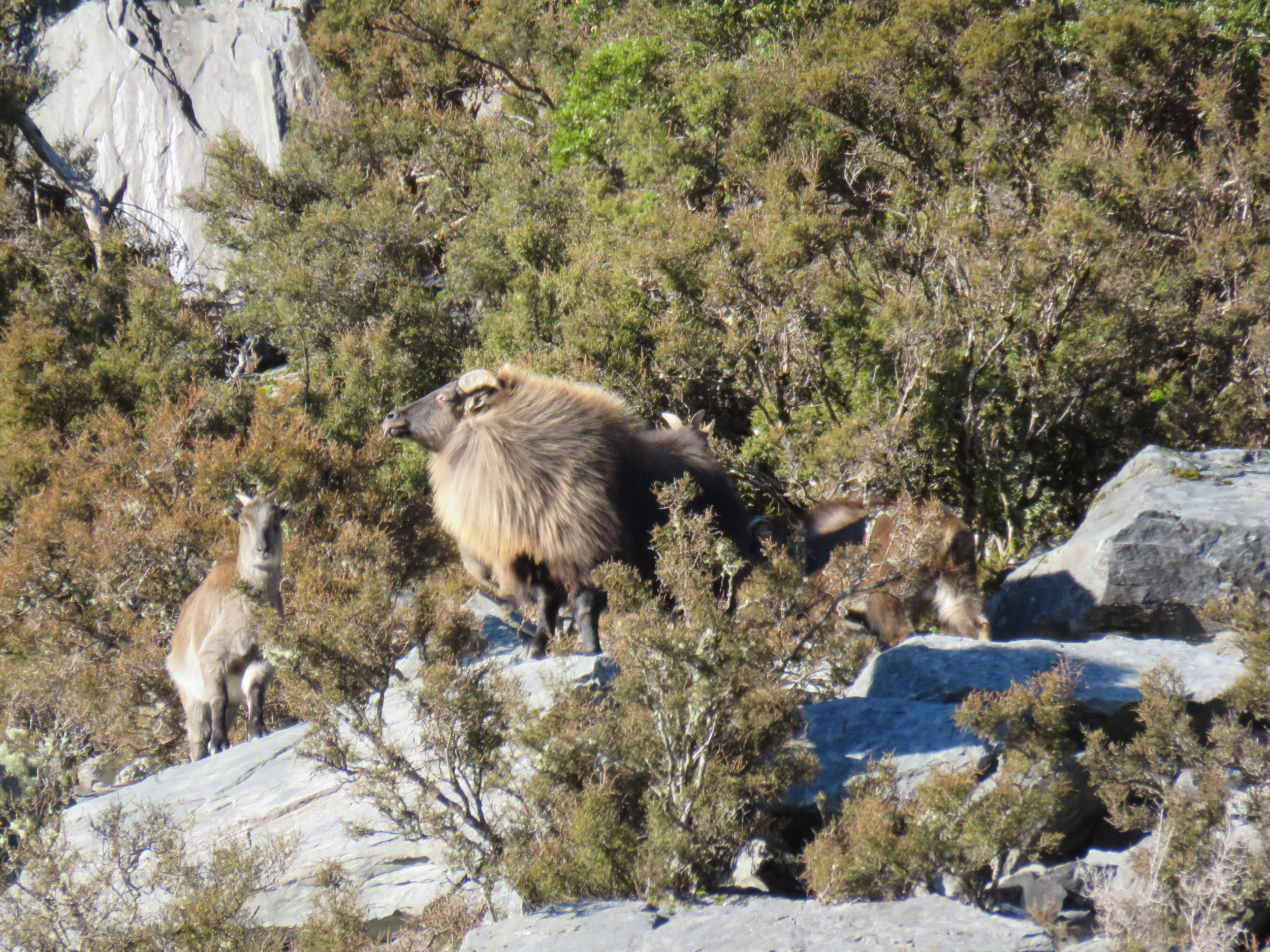 About to become a floor rug - Photo by Shaun Monk

The morning of day three was clagged in so we mucked about camp for a while salting skins and sawing firewood. The weather cleared after lunch giving us an opportunity to glass over the terrain on the opposite side of the Landsborough river.

There were some very nice looking heavy bulls moving about in the scrubby slips so it was time to blow up the inflatable raft and set up a fixed rope on a slow moving section of water. We wandered down the flats and spent the rest of the day glassing into a big steep face of regenerating scrub, with a few clear slips and pockets of beech forest; avalanche country. It was our mission to pick out the best access routes to the best looking bulls. One thing that was noticeable was the movement of these bulls. I guess being early in the rut there weren’t so many nannies in season so the males were moving around checking them all out.

One grassy slip had five different bulls wander through over a couple of hours. The grassy slip included a shallow basin where tahr liked to hang out and graze so we nicknamed it the duck pond. Other spots on these faces were named the grassy knoll, the black bluff, the little finger and the big finger, so named for the narrow bands of beech forest that must have dodged the avalanches.

A quick sat phone call to a famous shop keeper at Fox Glacier confirmed that the weather forecast was looking good so we made plans for an early start on day four to really get amongst these steep faces.

Being old and broken I offered to take the spotter role sitting on the opposite side of the valley. I could assess the horn size and locations of bulls then relay the info back to the hunters using 2-way radios. Ryan and Luke ascended the big finger, while Richie bush bashed his way up to a look out that we called the Mai-mai because it was a perfect shooting platform overlooking the duck pond. 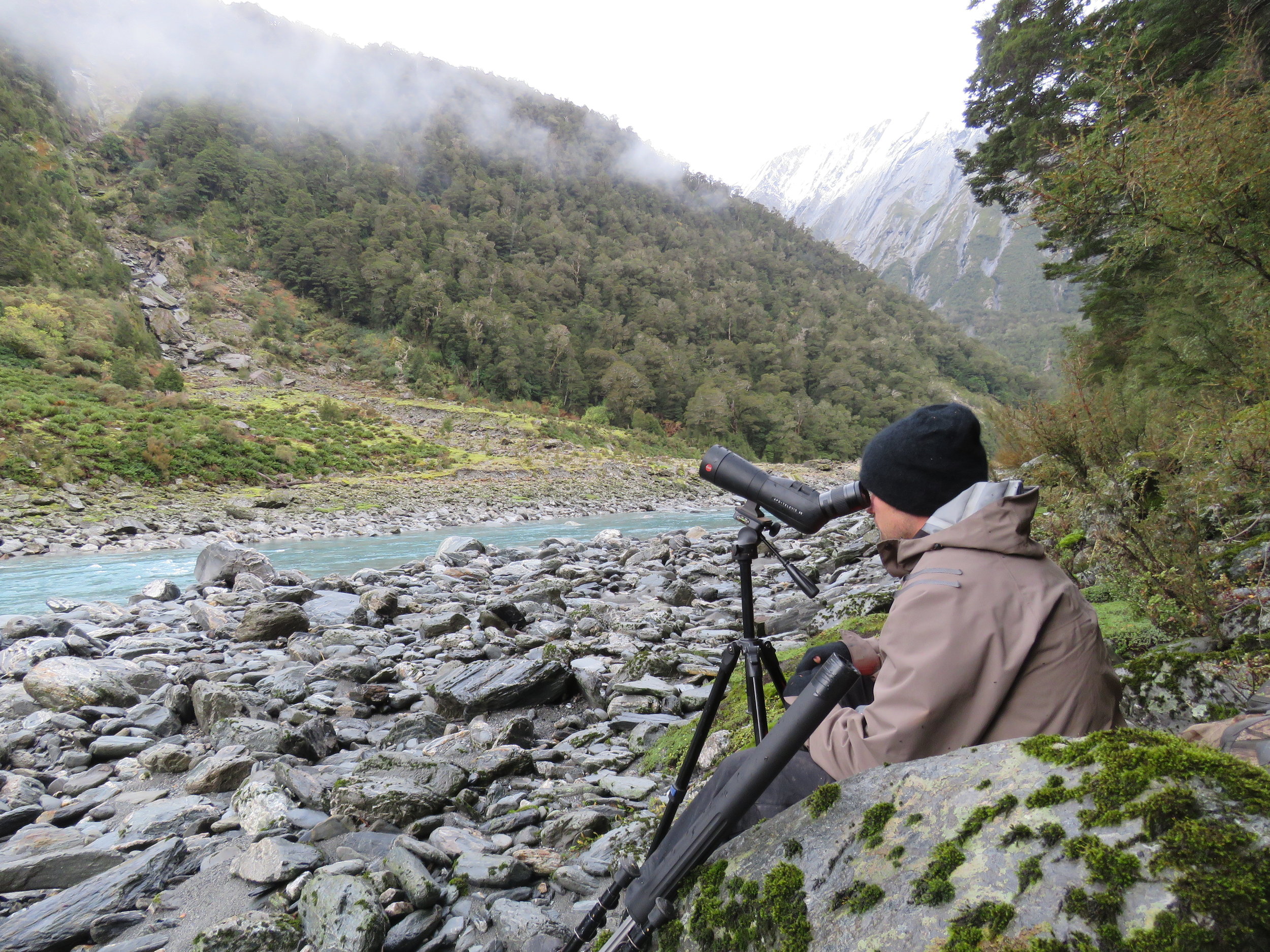 Ryan and Luke found a good look out above the big finger and noticed a cracker bull mucking about in the scrub a few hundred meters away. I could also see the bull occasionally and the horns looked to be over the 13 inch mark, but he was keeping well hidden in the bush. It was just a matter of time and after a very patient wait Luke finally got the shot away. A few hundred meters is a marathon through that kind of jungle but the boys did well to find and recover Luke’s nice 13 ¼ inch bull. They spent the rest of the day making their way down popping off nannies here and there along the way. 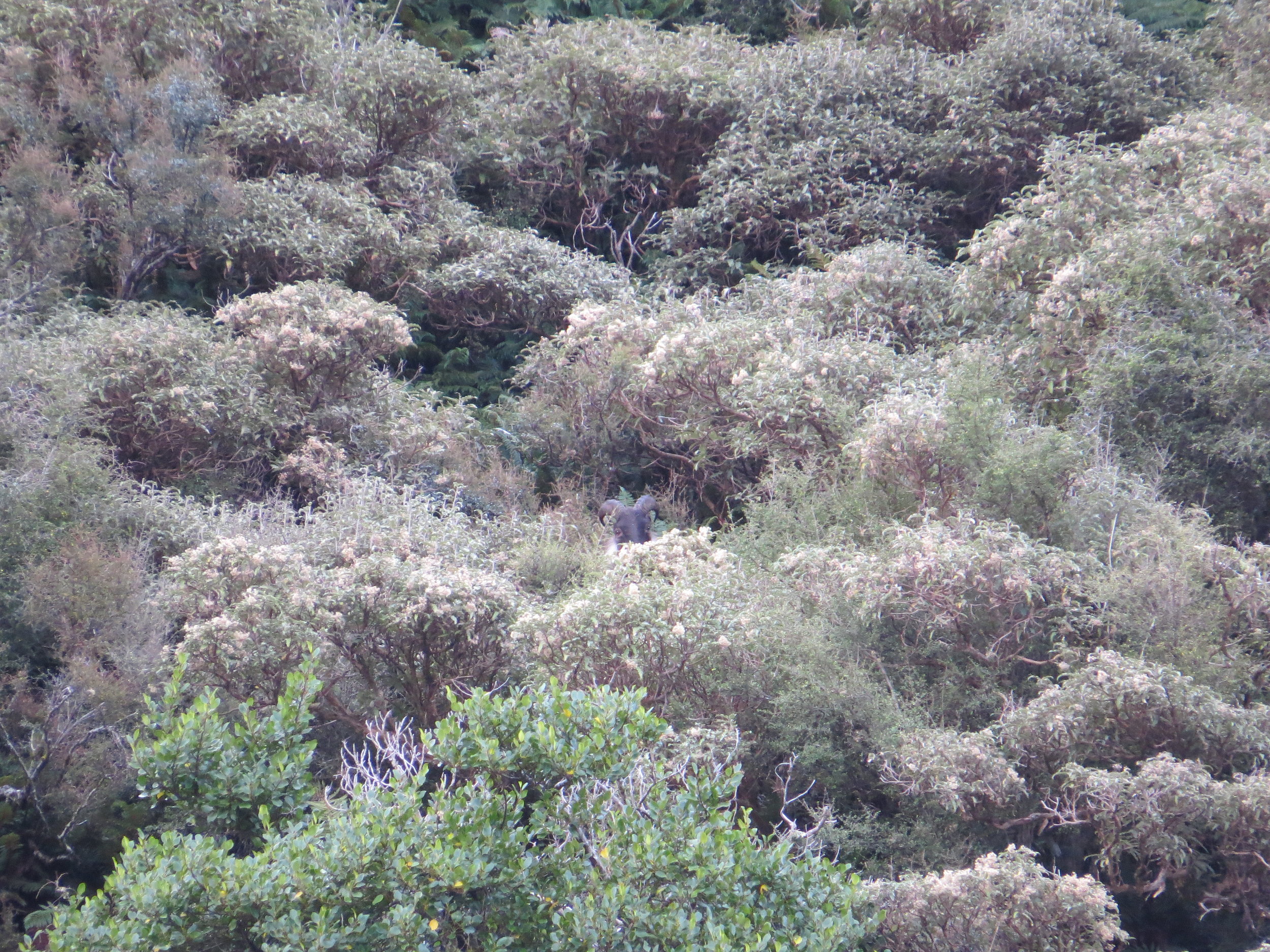 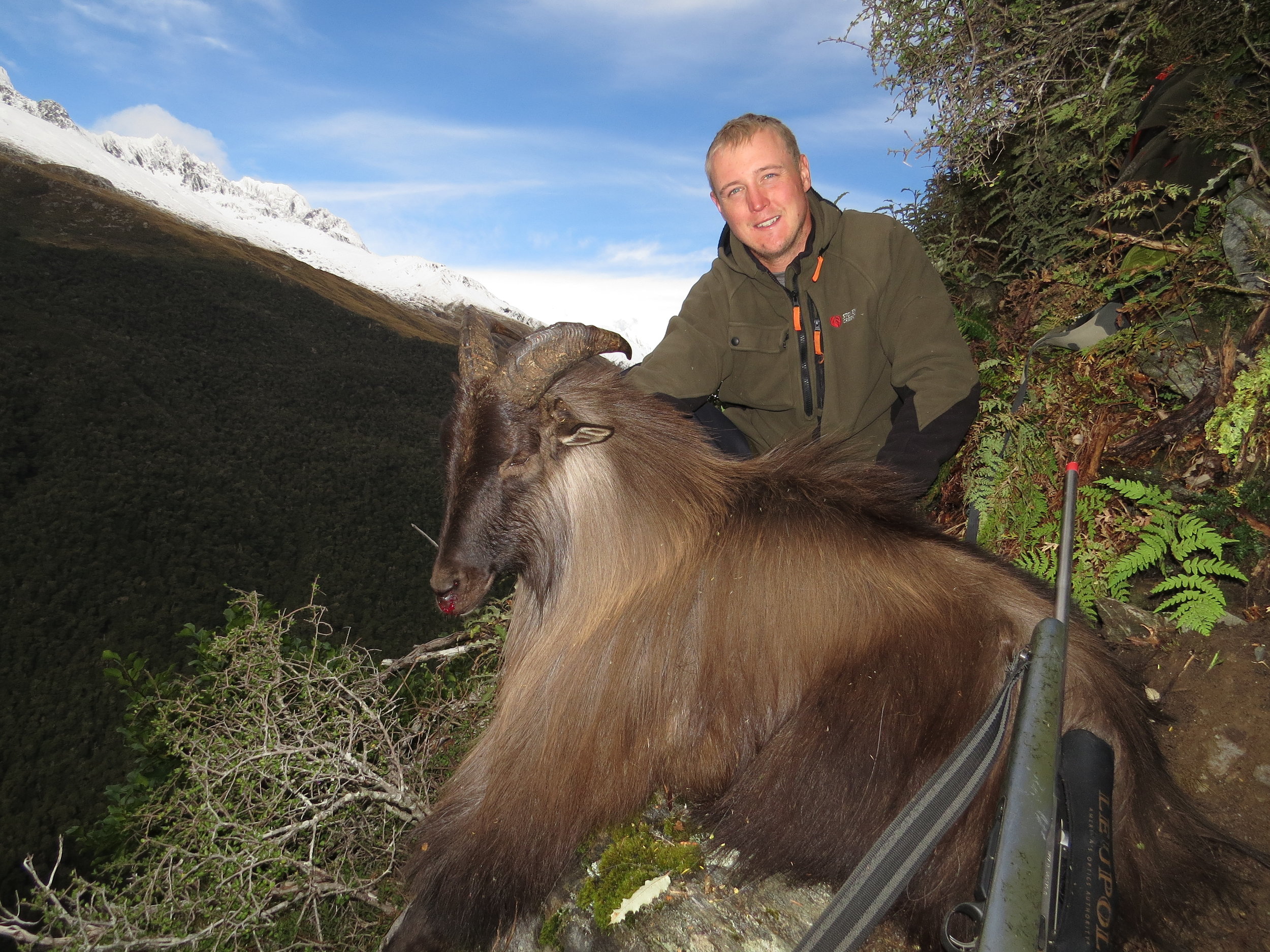 Richie was freezing his bum off sitting in his Mai-mai waiting for the big one! Several bulls had passed through the duck pond over the day but none were of good enough quality for Richie to pull the trigger. With a couple of hours light left he just got too cold and headed back down to the valley floor. I crossed the river and met up with the team on the river flats as the evening closed in. We’d just started heading back to the raft when a quick glance back up to the slopes revealed a monster bull tahr standing right on the duck pond! The spotter quickly trained in and he looked to have a very heavy set of horns that would crack the 14 inch mark. If only Richie had still been sitting in the Mai-mai it would have been an easy 150 meter shot! In desperation Richie and Ryan took off up the little finger to close the gap and hopefully get the cross hairs on this beast. Sadly the bull stepped into the scrub just as they broke through into the clear and the monster was never seen again.

The follow day we all split and headed in different directions to cover some new ground. A lot of animals were filmed and a few more nannies were taken out. I managed to climb up past the grassy knoll and got a shot away on a very nice looking dark coated bull just above the bush line. After tracking the blood trail for about an hour down into the heavy timber I eventually had to concede defeat, the bull was lost. 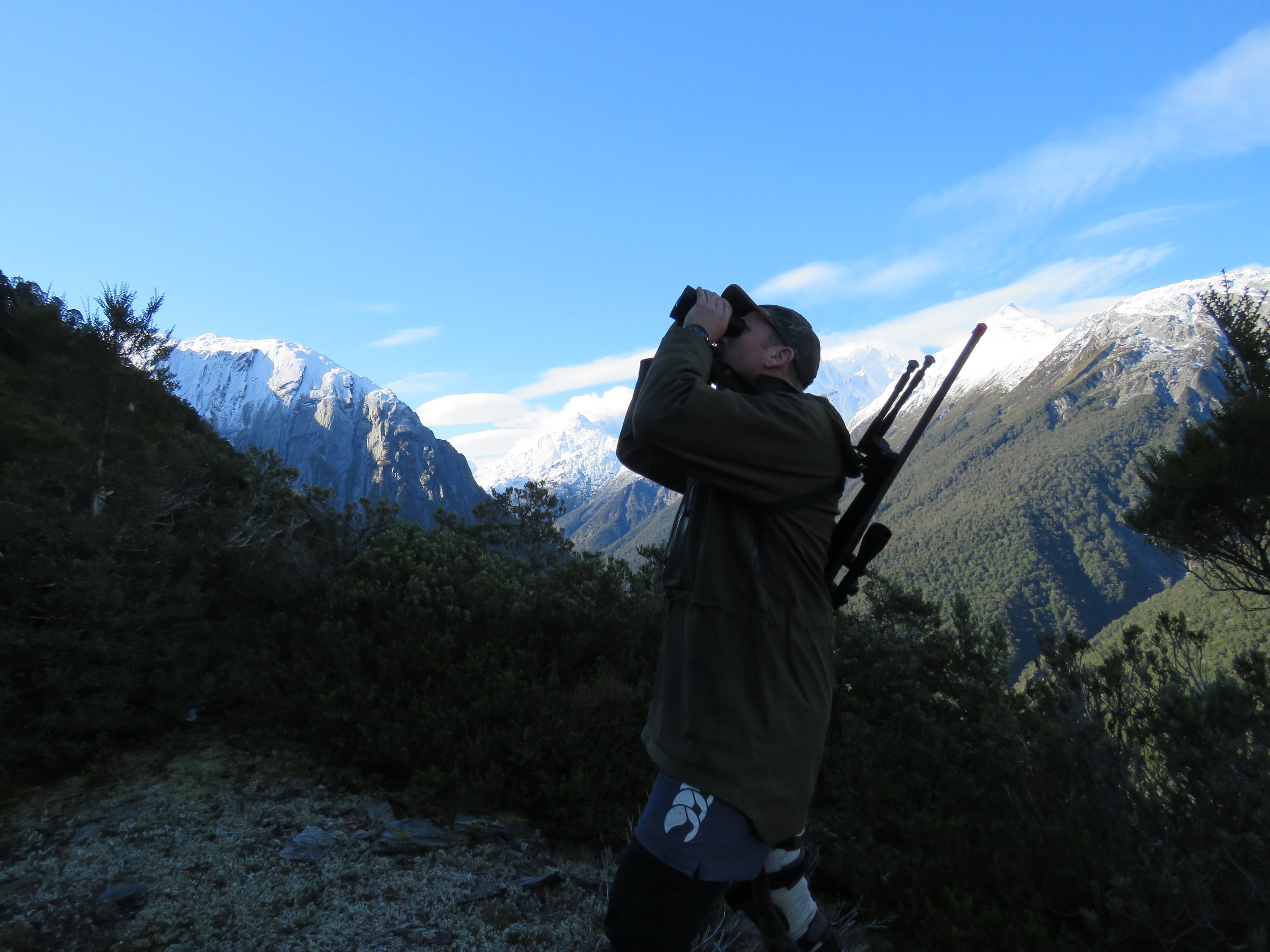 It's big country - Photo self portrait by Shaun Monk 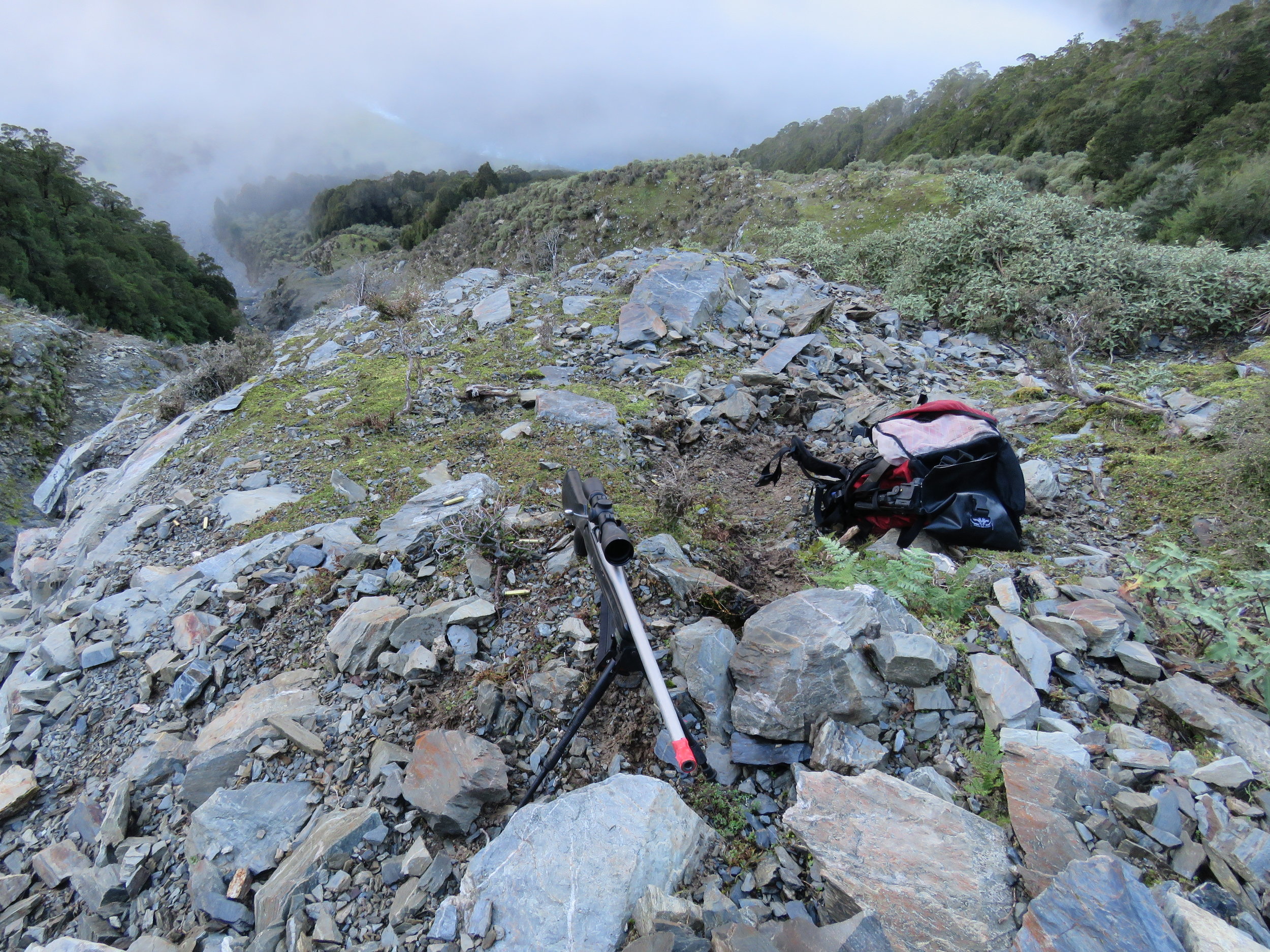 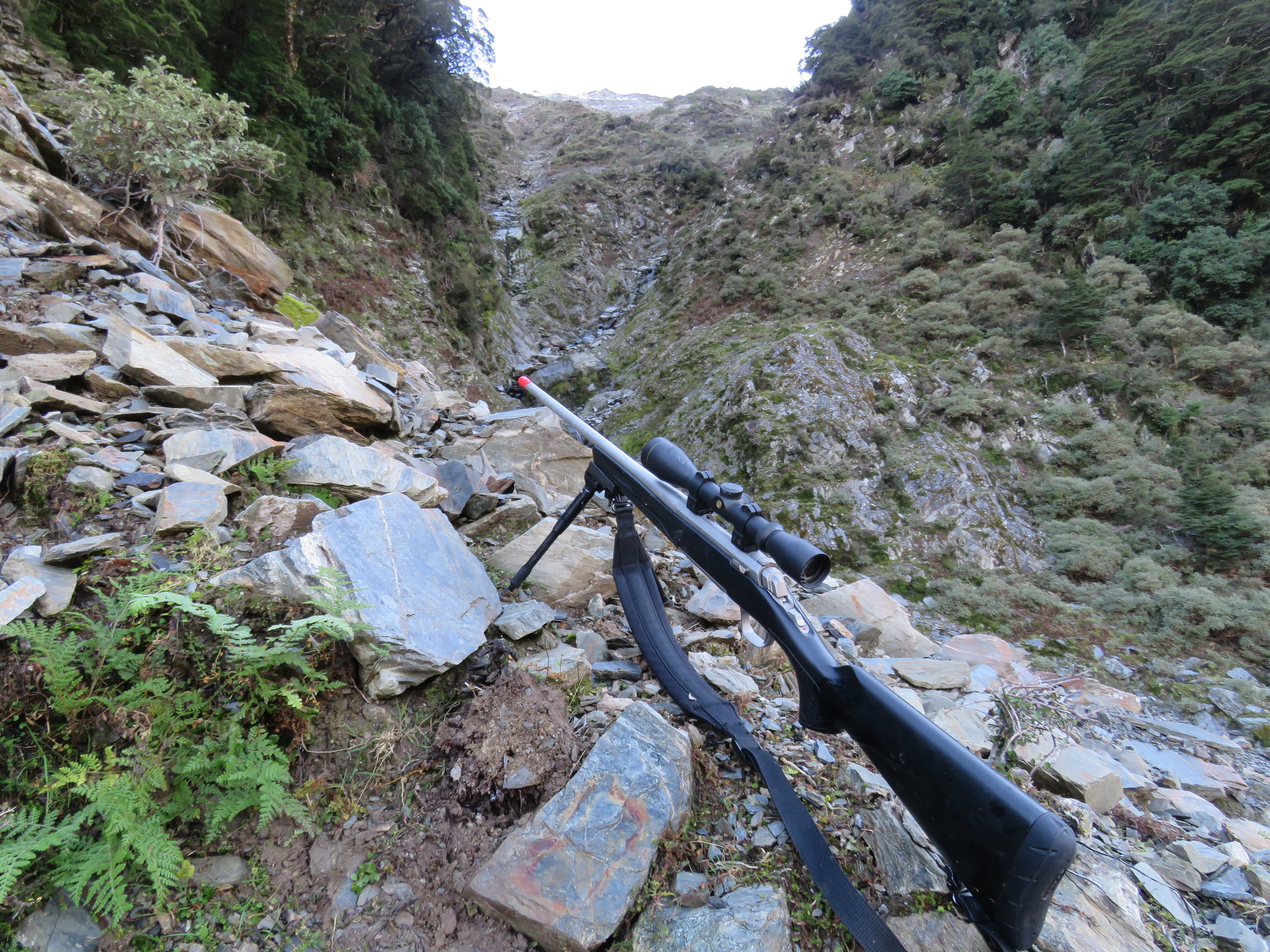 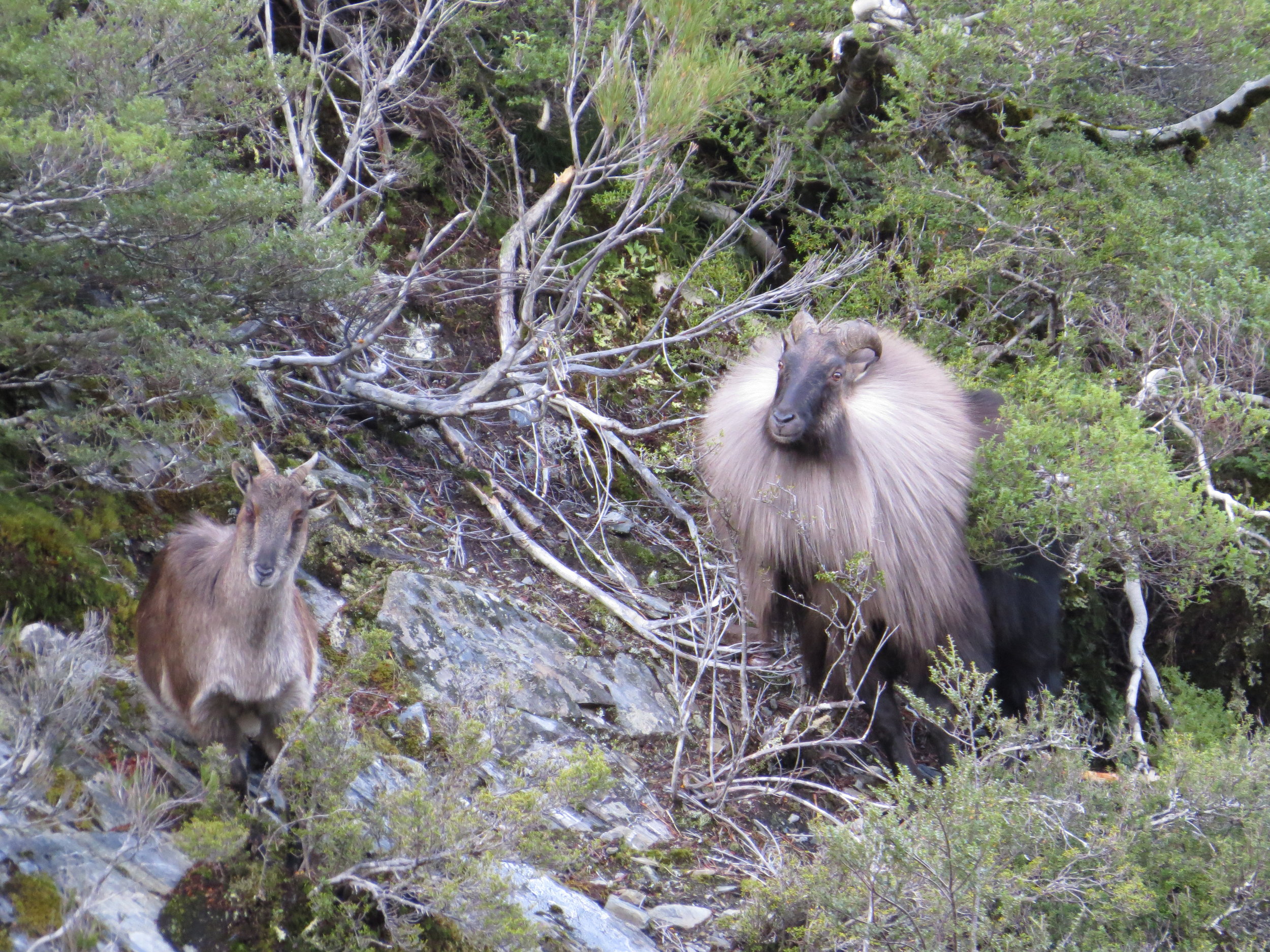 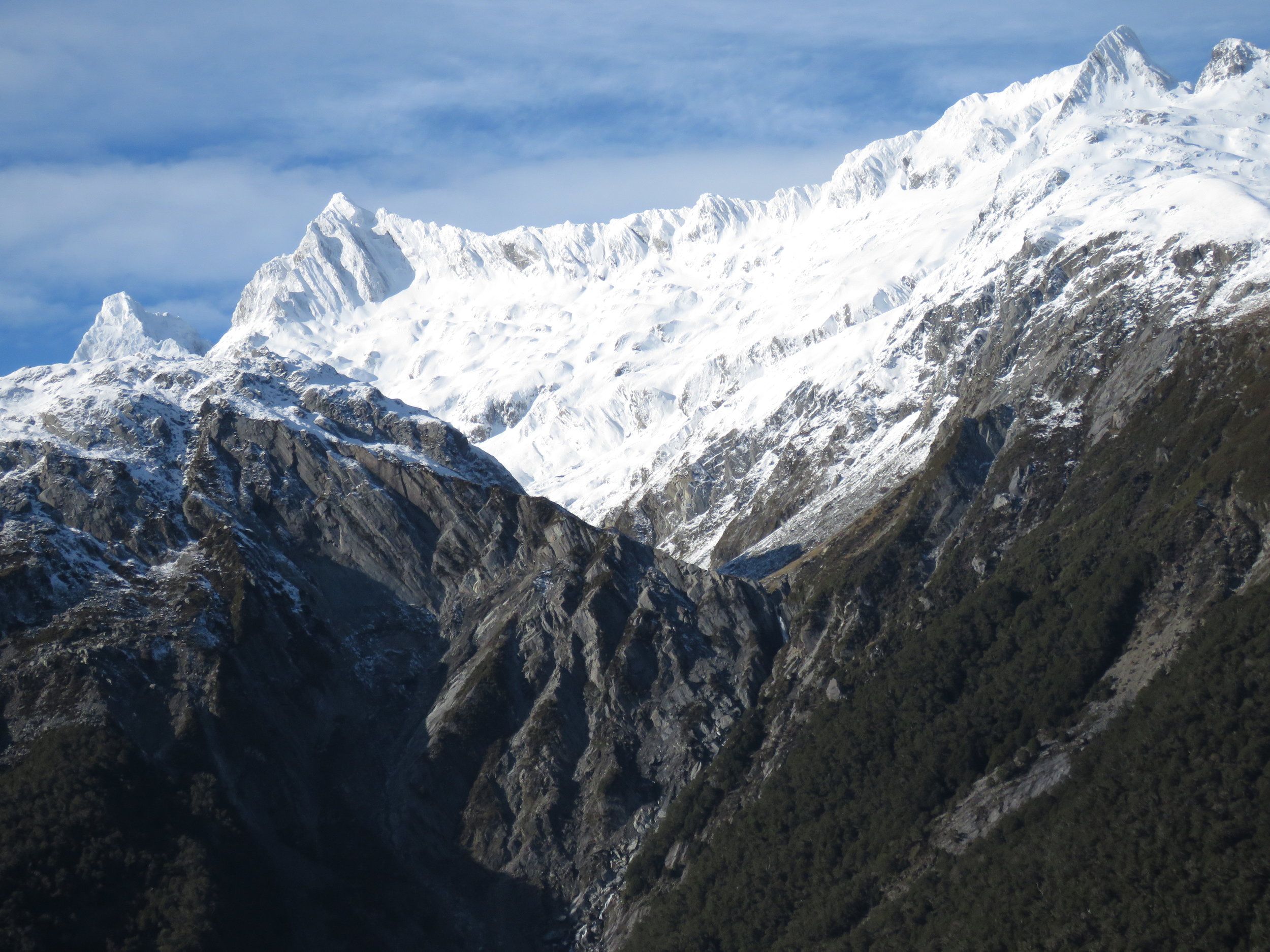 Out above the base camp - Photo by Shaun Monk 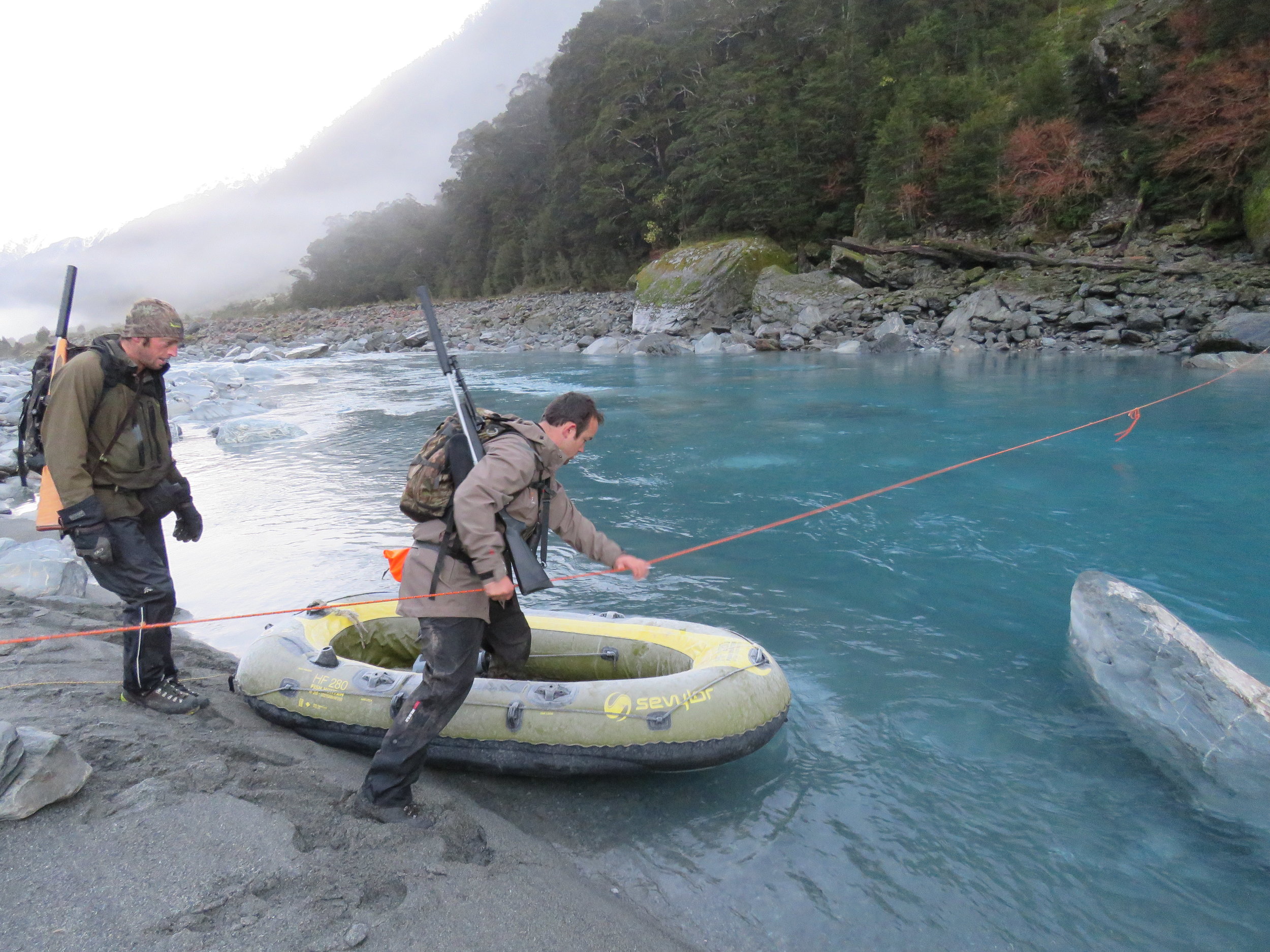 On our last day Richie spotted a very good black bull up high above the big finger so he and Ryan set off in pursuit.  I kept tabs on the black bull through the spotter, while Luke explored up the valley further. Richie was faced with one hell of a climb to get near this bull and the terrain got steeper and steeper as they went. Luckily the black bull was staying put, he was at the side of a nanny that must have been in season and he didn’t want to go anywhere. Eventually Richie found an angle to get a shot away but it wasn’t a clean kill and he and Ryan had a hell of a mission sidling around to locate him again, with Ryan placing the finishing shot. I watched the nanny and her kid move away from the black bull, but she was very reluctant to go more than 50 meters, even with some humans wandering around close by. Amazingly two lesser bulls showed up within 10 minutes of the shot and starting vying for the nannies attention, she must have been real hot! They all milled about a stones throw away from where Richie and Ryan were skinning out the black bull. 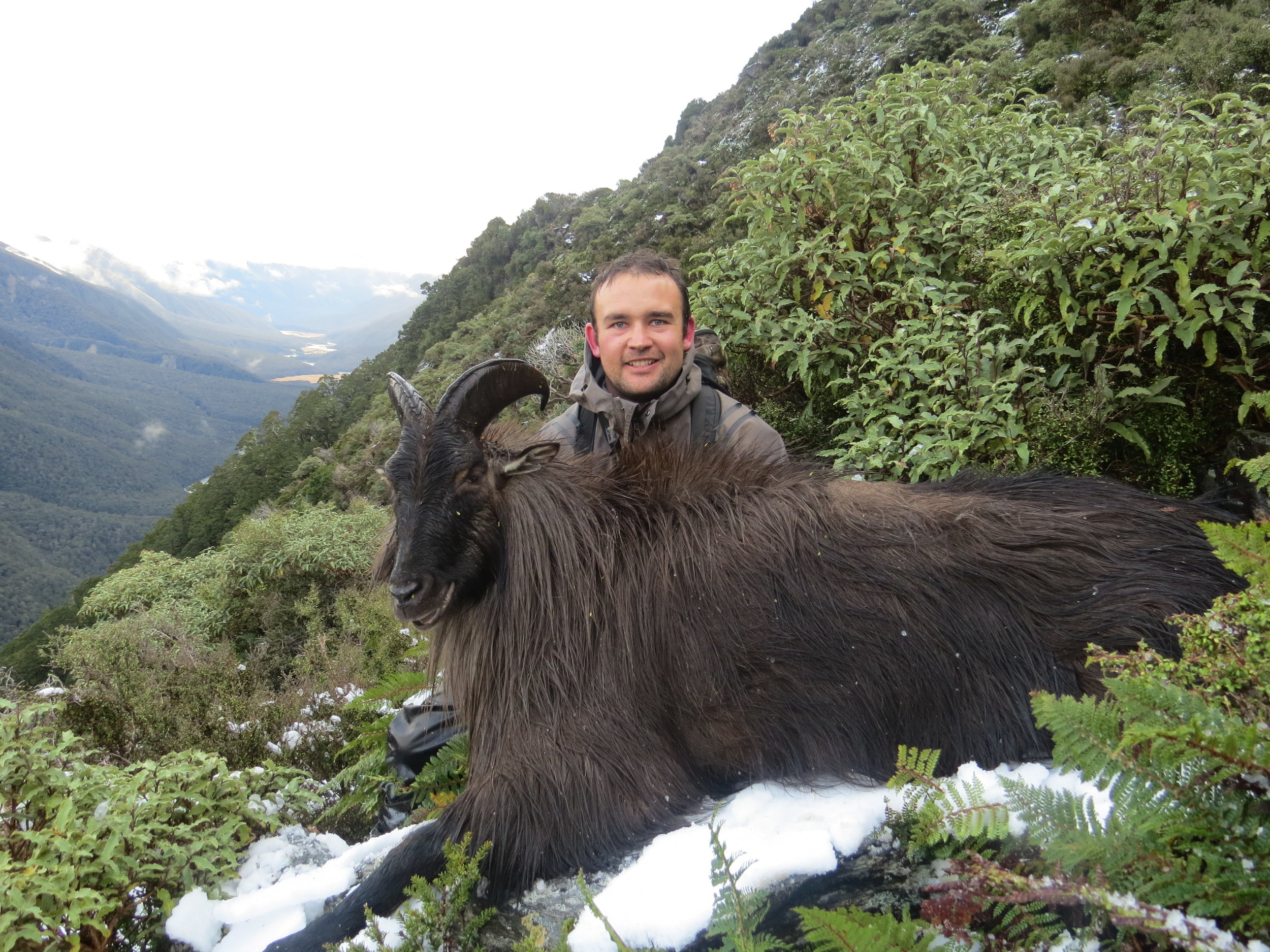 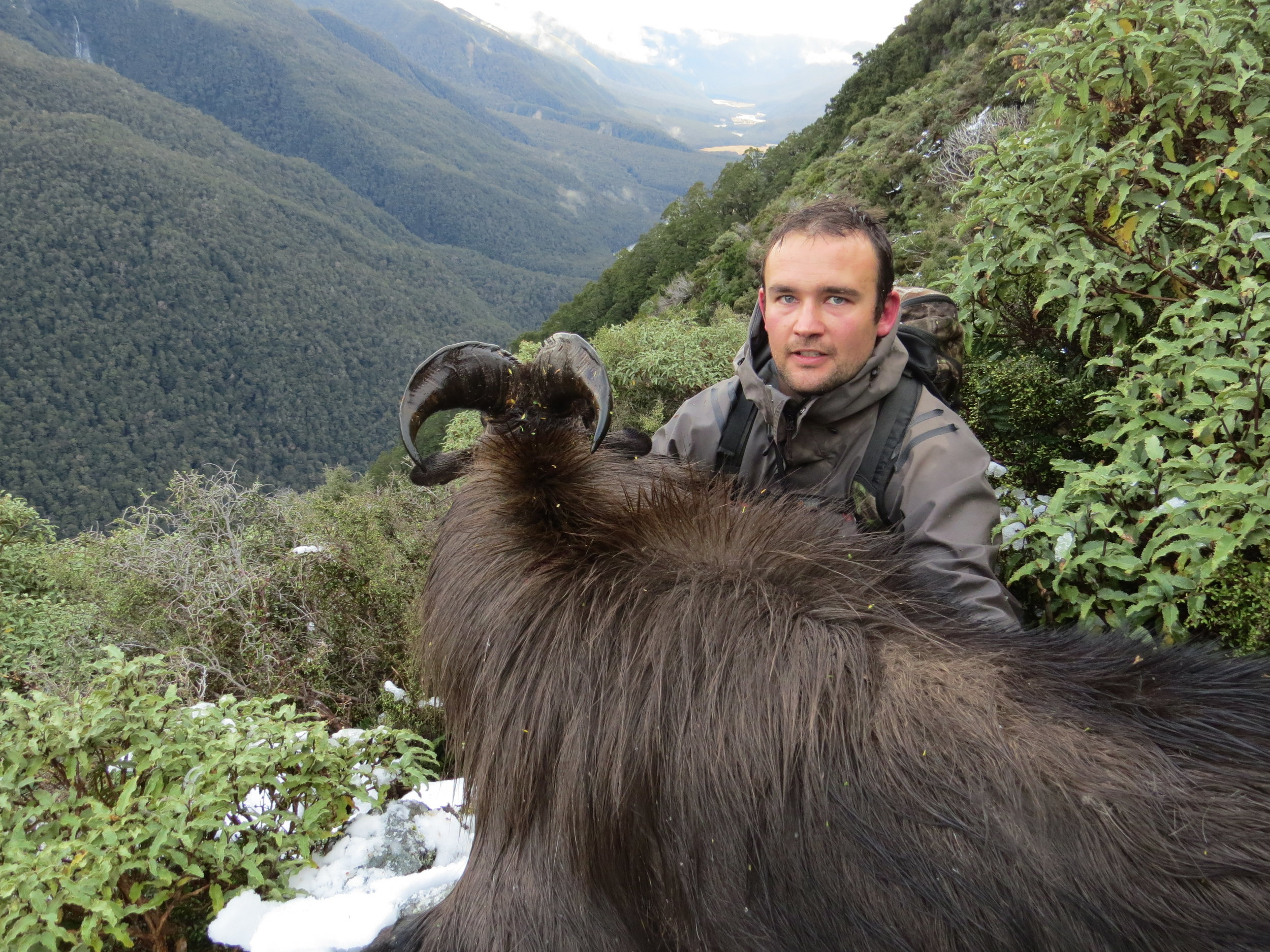 Now just to get this skin back down there! - Photo by Richie Williams

Everyone made it back off the hill safely and we packed up the raft then attempted to eat and drink as much of our remaining supplies as possible to lighten the load for pick up the next morning. The weather was clear and calm for our return flight, which took us through some of the most beautiful scenery in the world. I guess that’s why it’s protected as a Wilderness Area and it’s a real honour to be able to spend a short time exploring in there. Plus, there’s still plenty of big bull tahr left roaming around that tight scrub for another day or another hunter.

Left to grower older and wiser - Photo by Richie Williams