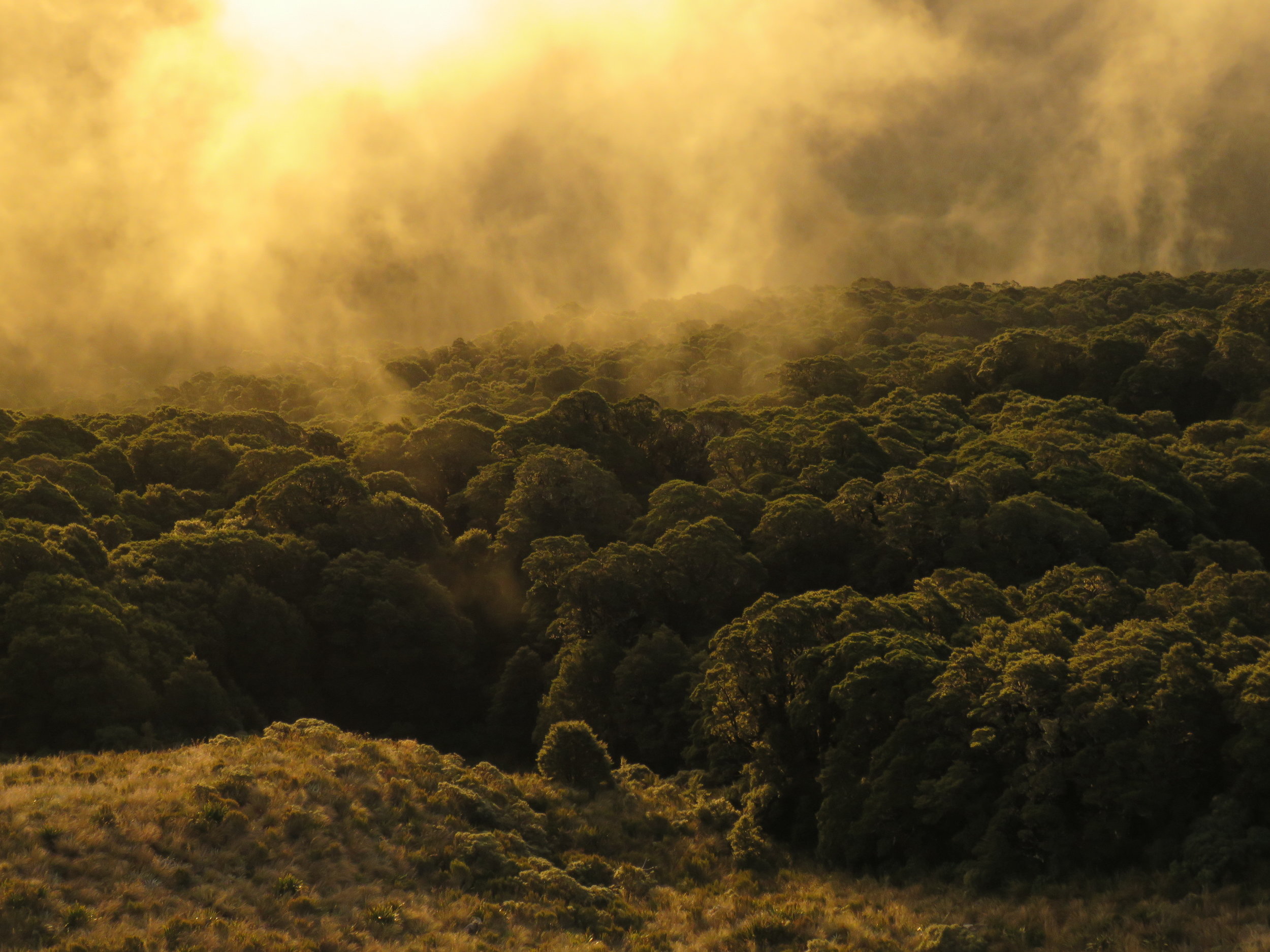 It's those moments after the foul weather has passed that make it all worth while.

The big yellow vinyl parker of the 80’s was about all my folks could afford for me as “kid” hunter. When I got given a real woollen swanny by my uncle as a trade for helping on his beef farm it changed my world to a much warmer one. But still there was the major issue of soaking up moisture and the swanny seemed to be able to quadruple its weight after a rainy day out. Putting a cold wet heavy swanny on the next morning was not much of a thrill and it was sometimes simply left at camp and replaced by an old woollen Baino jersey knitted by my aunty. 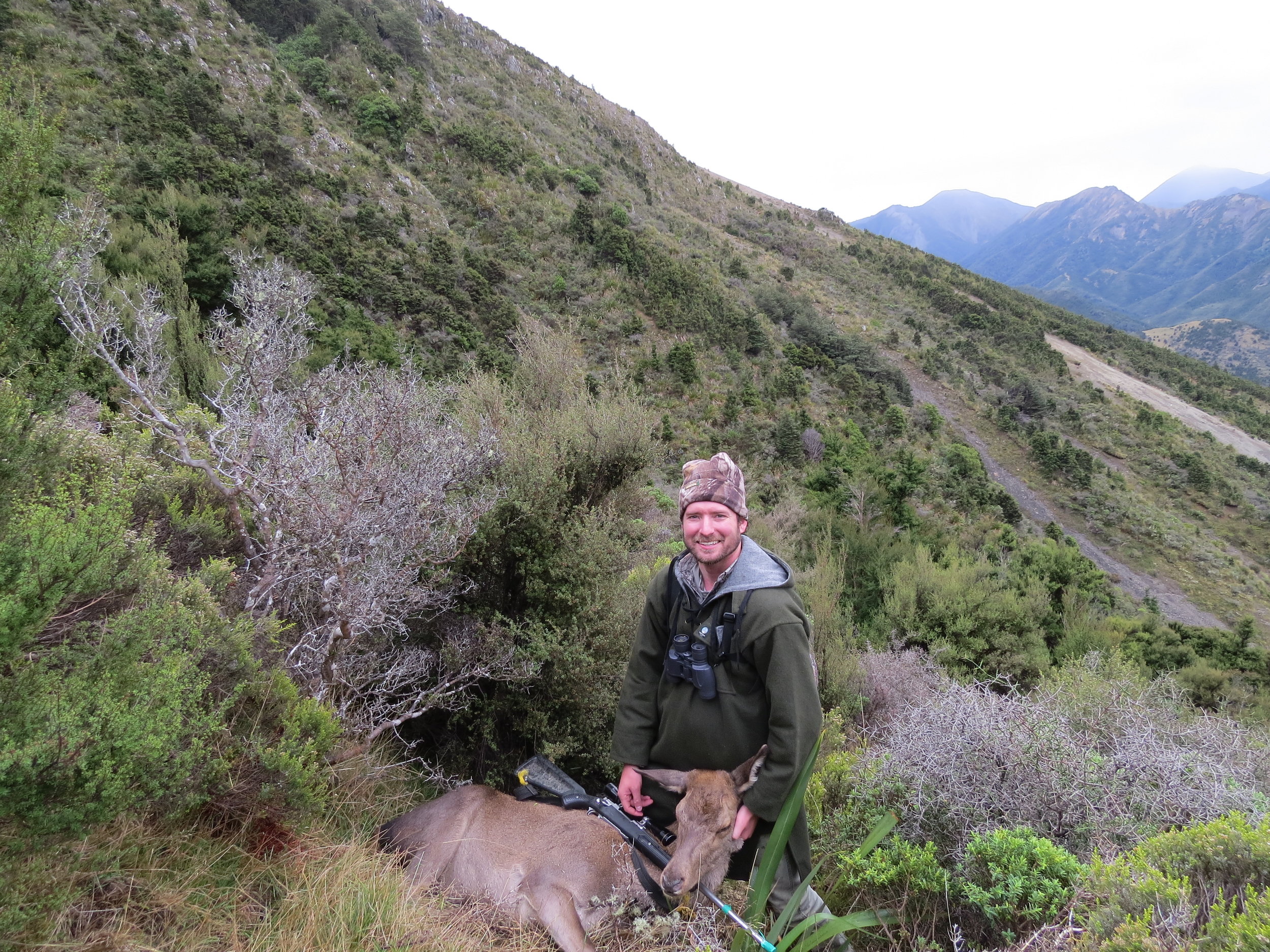 The classic woolen Swanny, once it gets wet its all over!

The wiser and wealthier persons of that era had things sorted by using the jackets we only associated with trampers, like the old classic Macpac bomber style rain coats. These things were actually water proof and sort of breathable, but the key was that they were light weight and easily packed down to fit in a day pack. At the end of the day you could hang them up near a fire or in a breeze and the next day you had a dry coat again.

The old Macpac gear was pretty tough back in its NZ made day as well. I wasn’t flash enough to own a good mountaineering style jacket so settled for the bulky “seal skin” style blue rain coat that was a bit cheaper at the Ag-retailer. What I liked about those is that they were a bit softer and therefore less noisy when sneaking through the bush, plus they were actually water proof, although you tended to get a bit sweaty!

The canvas oil skin was another option that many preferred and still use today for robustness, great for pushing through heavy scrub and combating the prickles of gorse and matagouri, they have a definite place in pig hunting and ag-work but they are very heavy and eventually soak up moisture and leak. 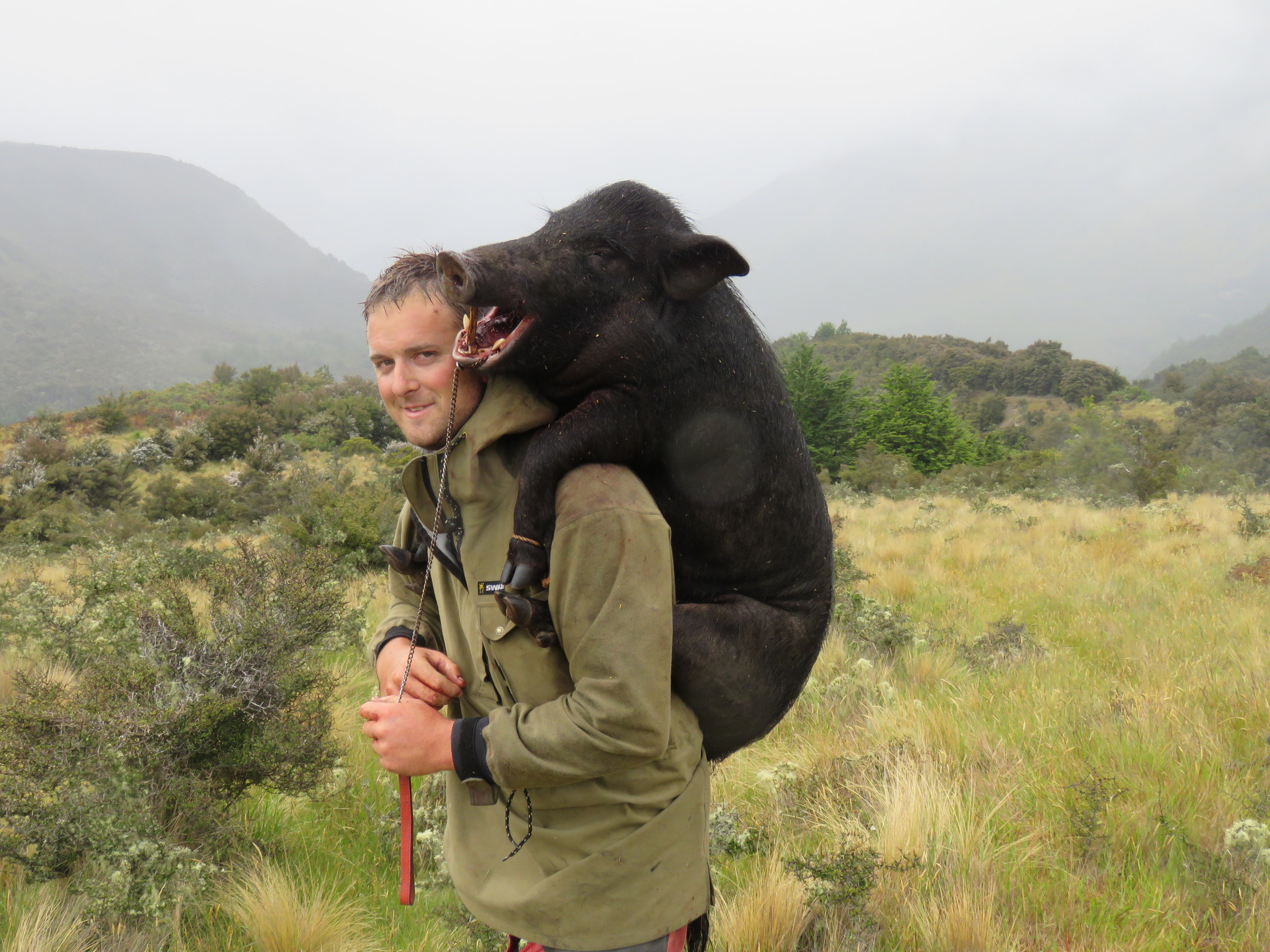 The Swazi Tahr anorak was a definite game changer in hunting apparel.

About 15 years ago a man called Davey came along and turned the outdoor market on its haunches with the release of new style of hunting jacket, the original Swazi Tahr Anorak. It was lovely and soft and light and long, like wearing a nighty…. I would say, not that I’ve worn many nighties. It had huge pockets and a great hood design suited for hard core hunters. The first shock to most was that it was so bloody expensive, but those that managed to save up for one seemed to rave about them and this created a steady uptake of the Tahr Anorak and other clever new designs that Swazi kept coming up with. The rest of the hunting apparel industry had no choice but to follow and barraged the market with copy-cat products until an entire nation of hunters was walking around wearing their pyjamas in the rain!

All of these products claimed to be water proof and breathable some kind of were. They were a big improvement on the old woollen swanni and still retained the soft sneaky outer fabric which many have come to think is necessary for stalking success. I might joke about a nation of hunters wearing pyjamas in the rain but there is some sense in the analogy and that is all related back to the “next day”. 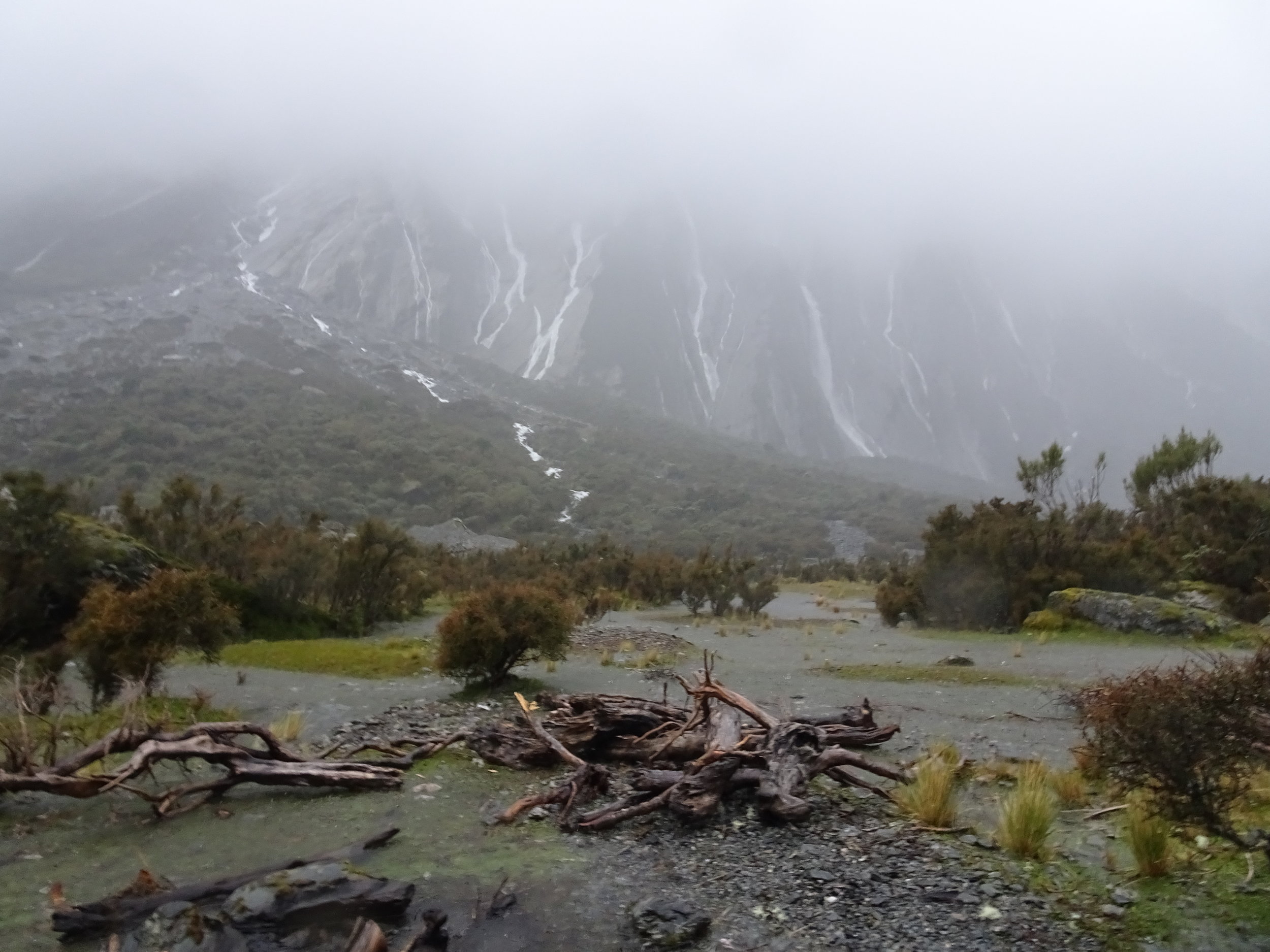 Unfortunately once you’re a couple of hunts in and the factory sheen is gone, these fabrics start to take up water. You might stay relatively dry for the first damp day, but once wet they take ages to dry and if you are on a multi-day hunt they can become a real displeasure to either put back on in the morning or to roll up and stuff into your pack. If you are just cruising around on a quad or ute, these soft furry coats are still awesome and have their place for the majority of those kicking around in the bush. 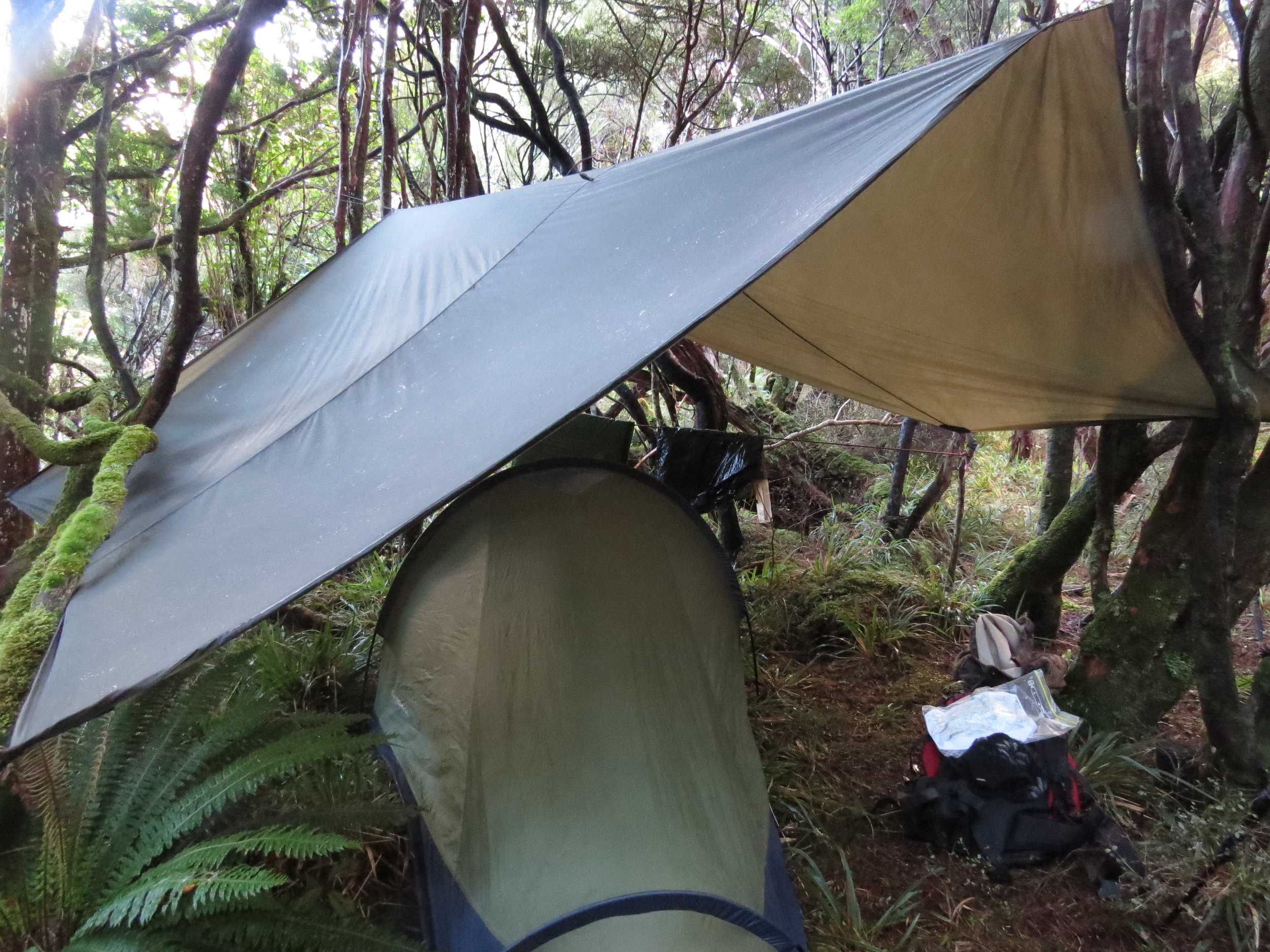 Back-pack hunting in winter on Stewart Island, rain and hail every day! Getting your gear dry for the next morning is crucial to keeping you keen and interested in careful stalking, otherwise its just survival and no deer! 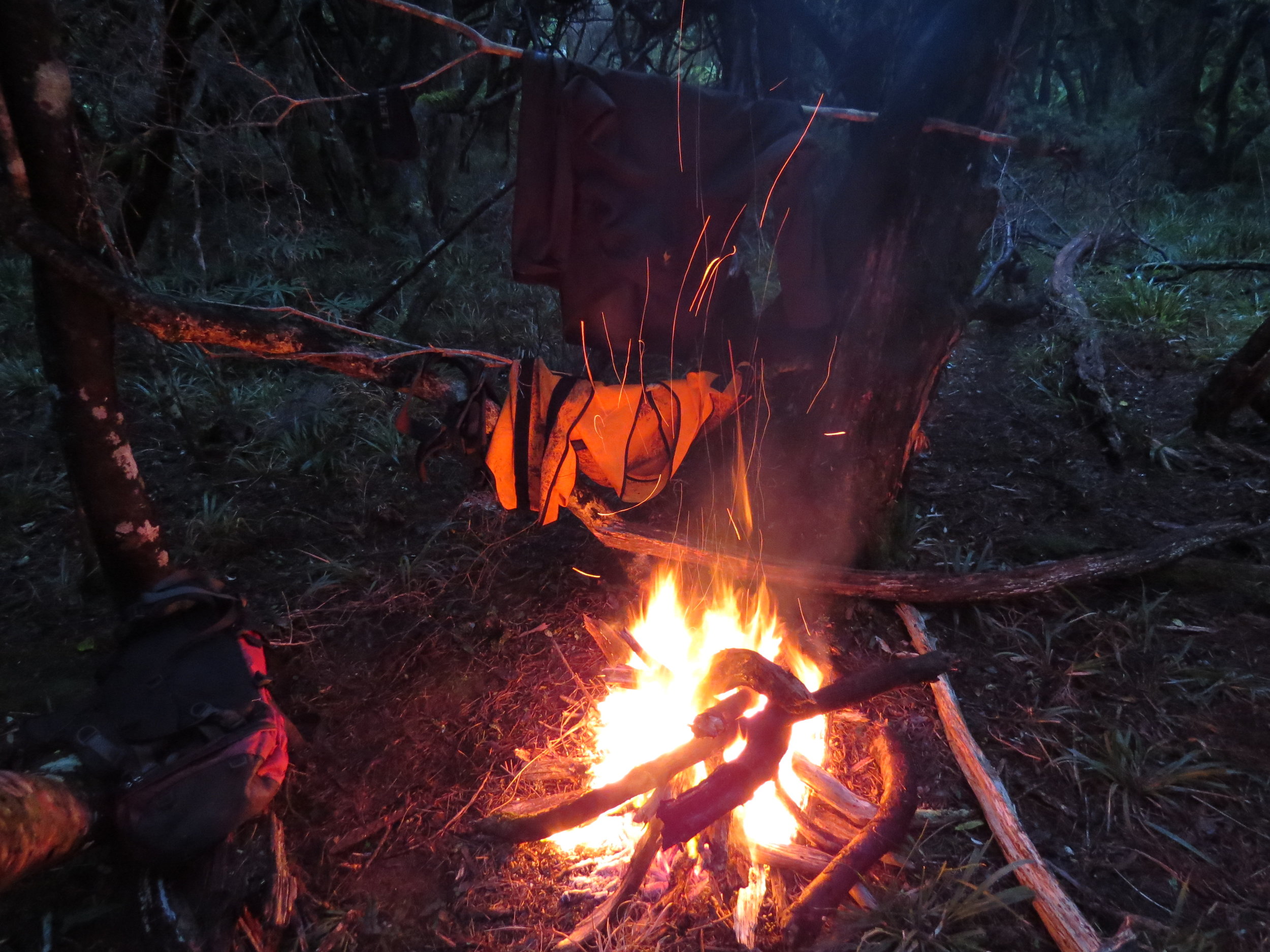 Drying gear next to a camp fire each evening was crucial for staying out for multiple days on Stewart Island, being dry and comfortable at the start of each morning is better than the alternative!

But there is a new era upon us where more and more hunters are taking to extreme and intrepid hunting options. The great explorers have always been around, it’s part of our kiwi heritage but it’s safe to say that there are higher numbers of back-pack hunters than ever before.

The back-pack hunters gear requirements are far more fastidious than the quad warriors. These guys are serious about what they do, they have to face extreme weather conditions with limited kit options and don’t want to perish on the hill just because of a bad clothing choice.

Breathability is a key focus for a mountain hunter as they tend to climb hard and sweat a lot, then often sit in the cold and glass for long periods or climb into an area to set up fly camps right in the hunting zone. Everything is carried on their backs so being light weight is just as high a priority as having very functional gear. The type of gear required pretty much falls into the category of mountaineering and it is becoming more affordable, and more available every year.

Light weight rifles, optics, GPS, satellite phones, PLB’s, packs, sleeping bags, food and cooking systems have advanced impressively in the last 5 years and this is allowing more enthusiasts to give back-pack hunting a go without fear of being absolutely miserable when the weather packs it in. Plus these guys are getting some really good results with amazing quality public land trophies coming off the mountains, serving as  inspiration for even more people to give it crack.

The really cool thing that is going on in conjunction with the surge in back-pack hunting popularity is that mountaineering apparel is now being designed specifically for hunting. No pyjamas amongst this lot though, the modern light weight outer fabrics are not “scratchy” anymore. The old Macpac coat of the 90’s has been reinvented to be softer, lighter, more weather proof and more breathable than ever before and also have the features we like in a hunting coat, like big pockets, high visibility hoods and colours and camo options that we associate with hunting. There are a few options around for us to choose from now and the pick of the bunch are extremely rain proof, while others are still a bit leaky and you really do get what you pay for. 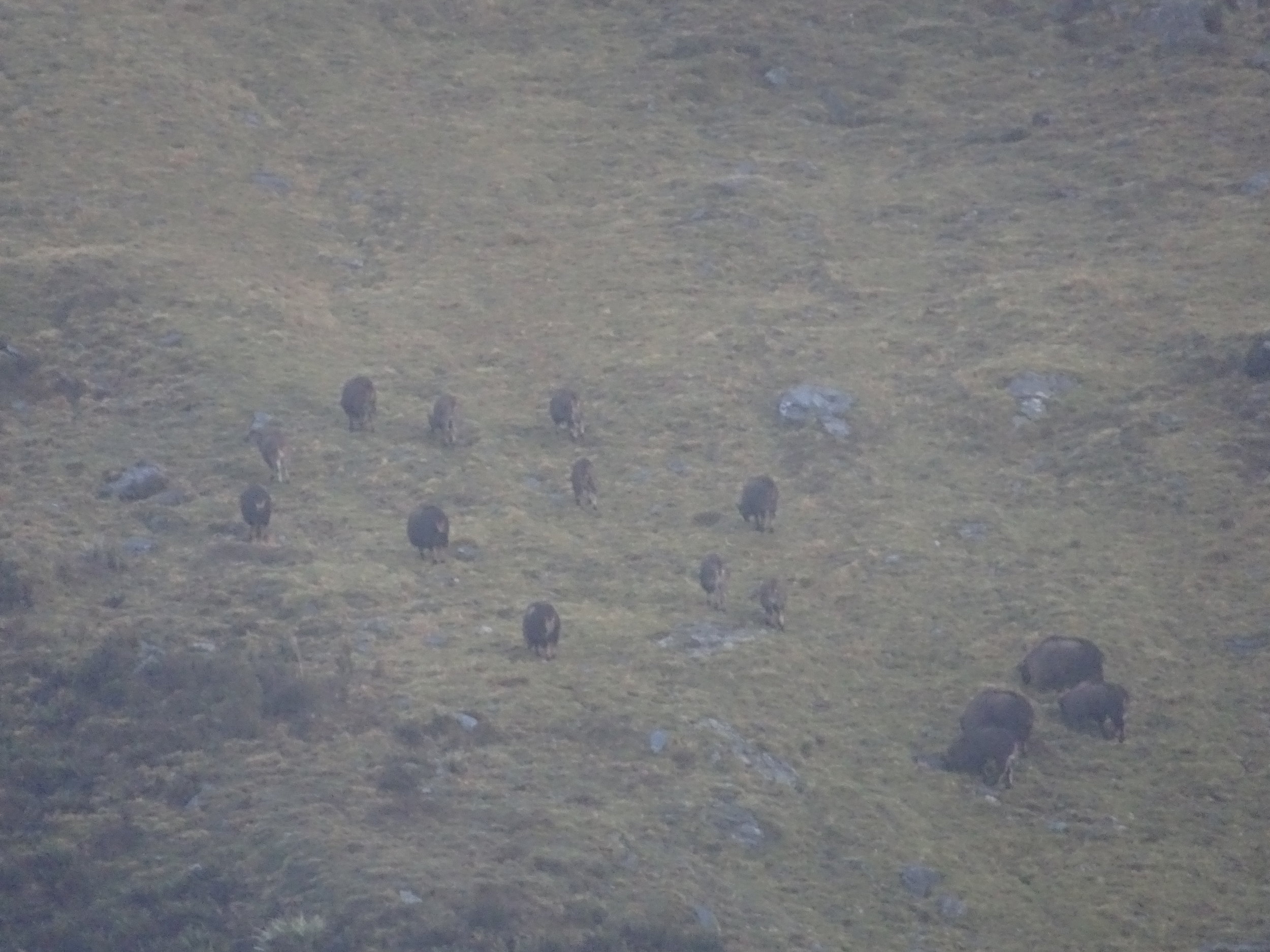 Once that weather clears......

The cleverest back-pack hunters will use a layering system, with merino base layers, gloves, pants and outer leggings to work in conjunction with their top layer jacket. It’s not cheap by all means, but it’s amazing how much you are willing to spend on your comfort when things get rough and I’ve seen many jokers pull pin after a nasty night only to miss out on some amazing hunting once the weather has cleared. And that is really the key point of this article, the “next day” when you can extract yourself out of your sleeping bag with dry merinos on your skin, shake the moisture off your outer layer kit, chuck it on and get straight back into the hunting without being subject to too much discomfort. 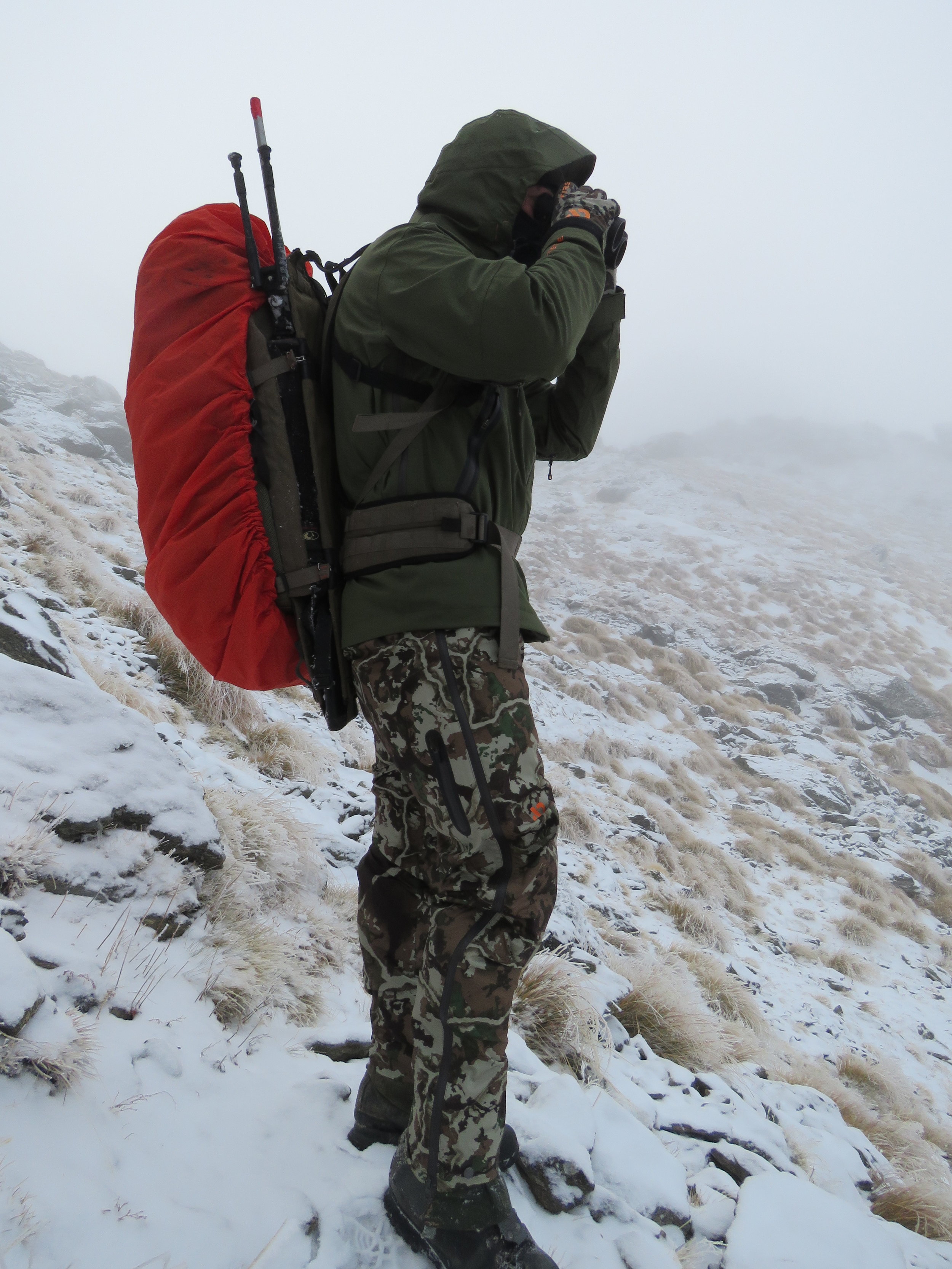 Its the "next day" that good hunting apparel really proves its worth.