I have been keeping an eye on the annual Haast Roar ballot this year to see if people have been successful or not and what their perceptions may be on why they were unsuccessful. As is usual there are the “the ballot’s rigged” and “overseas hunters are getting all the blocks” type comments, so I thought I would try to get a bit of information from the Department of Conservation team in Haast who run the ballot.

Those of you who applied this year will have noticed a bit of a change in the process, with it now being fully online. Maybe there was some confusion as to how to use the new system correctly as at the conclusion of the draw, 20% of the blocks were unallocated. There could be a number of reasons for that, maybe they are just unpopular blocks, but it seemed that some of the applications were not filled out to their full extent.

So, here’s some overall figures on the Ballot_

From that, we can gather that in theory, applicants had a 52% chance of drawing a block. This does not take into account the fact that the popular blocks would have more applicants therefore reducing that percentage probably quite significantly. The overseas applicants are minimal at 1.3% and only make up 0.4% of successful applicants. The roar ballot is far less popular with overseas hunters than the Tahr ballot (13%) most likely because the only other places in the world you can hunt Tahr are Nepal and the States. The animals in the States are all behind wire and hardly in their natural environment, while the hunts in Nepal are limited to maybe 10 tags a year and therefore very expensive.

If we then look at the numbers of applications on a block by block perspective, it then becomes a little clearer as to why people may be unsuccessful for their chosen block. All the blocks have the same number of opportunities so as the number of applicants for any one block increases, the chance of actually being successful decreases. You have four “chances” per application as you can select four blocks (the same block four times or four different ones or any other combo) and then rank them in order of preference for the period you want to hunt.

Unsurprisingly, the blocks with the highest number of applications also tend to have higher numbers of people picking them as their number 1 preference. Several blocks in particular see high applications while the adjacent one gets little interest. Some blocks with high application rates are hardly known for producing anything with decent antlers but are known for either a) plentiful animals or b) ease of access.

In the first paragraph I mentioned that there was a theoretical 52% chance of drawing a block. If you then look at a popular block like McArthur Creek, you drop down to a theoretical 12% chance based on there being 4 opportunities to draw and 33 parties naming it as their first-choice block.

But theoretical chances aside, the reality of your chance of drawing a block requires a lot more maths and/or brain power than I am capable of. The way the ballot works is this_ Your application with your four chosen blocks goes into a computer based program with each application having a unique number. Numbers are randomly generated and drawn. If you are the first to be drawn, you get your number one block. If you are second and your number one block is still unallocated, you get your number one choice. If the person drawn before you has already been allocated your number one choice, you get your number two choice and so on and so on. If you are drawn and all your preferred blocks have been allocated, you are unsuccessful but qualify for the unsuccessful 2nd stage round which allows the applicants to choose one of the unallocated blocks. Following stage 2 any remaining unallocated blocks become available online to any/all hunters (whether they have a block or not) at a cost of $40.00 per. Clear as mud?

Anyway, you could draw all sorts of conclusions from the numbers so rather than spout on about what I think it all means, have a look for yourself. It’s a bit dry but those of you who have an interest in the Haast ballot may gather a little insight from it.

A big thanks must go out to the Haast DOC team for this information and for continuing to provide the opportunity to ballot for hunting opportunities in one of the most beautiful parts of our country. 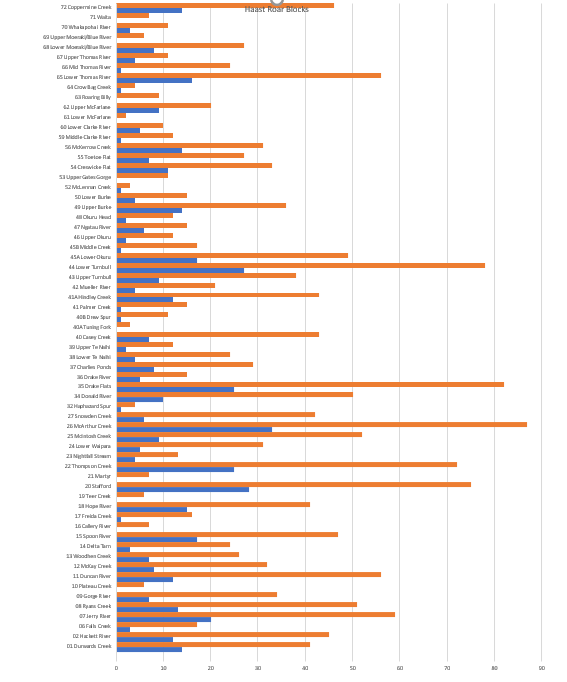