Passing the Torch - By Shaun Monk 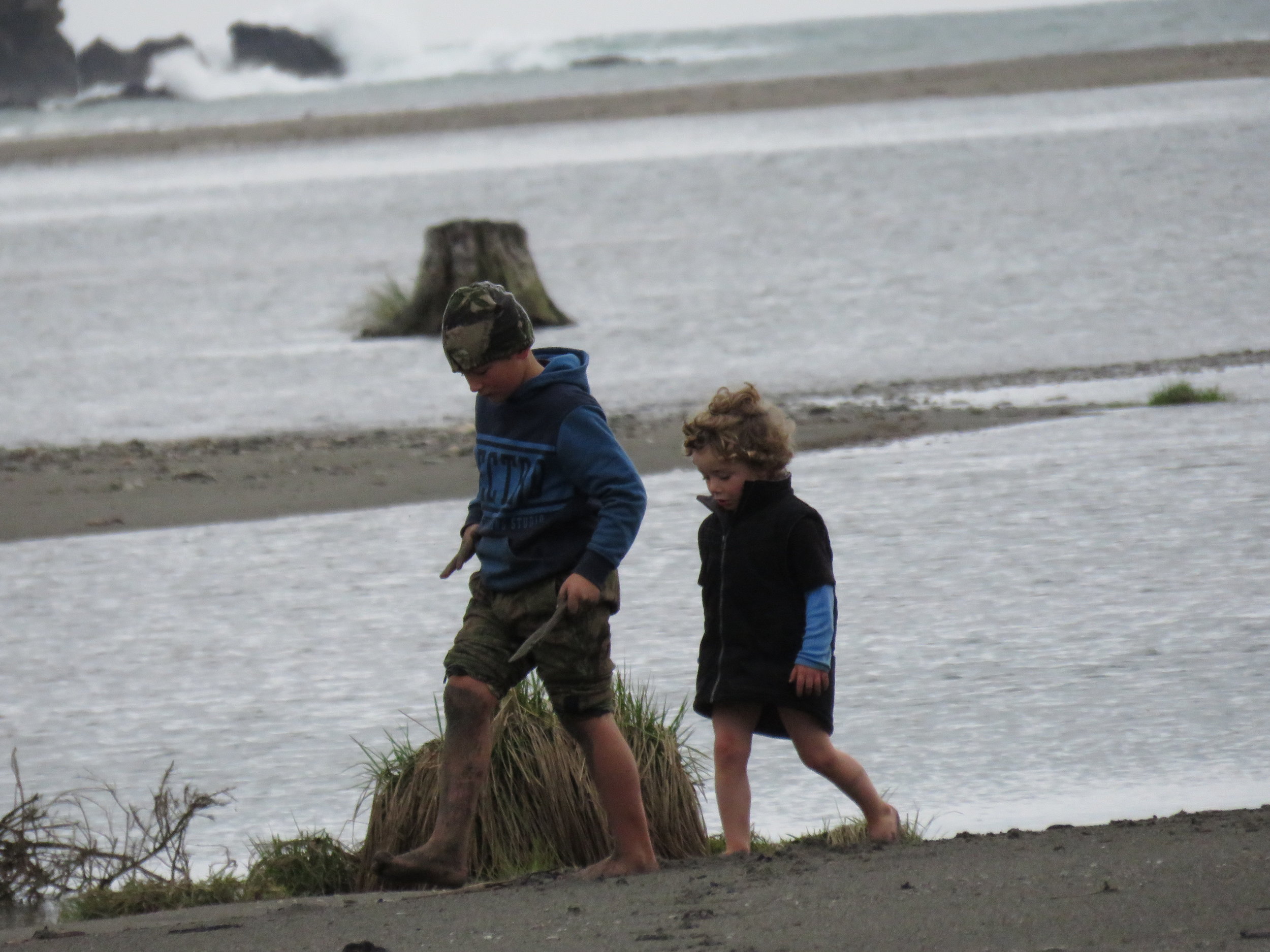 Serious George (7) and his cousin James (3) looking for a better spot to set their whitebait net.

Serious George might only be 7 years old but he’s got stuff to do and if he has to miss a day of school to get stuff done, then that’s just the way it is.

It was a great privilege to have my nephew George tag along on a West Coast man trip to help out with duties around camp like; cooking bush tucker, eating bush tucker, catching white baiting, stalking deer and more eating. Overall eating was by far George’s best capability downing dozens of chops, snarlers and white bait patties, along with multiple loaves of bread, packs of wild pork bacon and tins of baked beans.

We hitched a ride up the river in Uncle Ben’s jet boat and carried our gear up to a bush hut. The first job was to set up some possum traps around the camp, with George on duty hammering the staples into the trees to hold the chains for the leg hold traps, while my job was to set the jaws open. We didn’t have any apple or carrots for possum attractant, so bits of bread were placed beside the traps instead.

Then it was time for a cuppa while waiting for the afternoon to fade into evening. We got our hunting gear on including our gumboots and set off through the bush to sneak up on a likely little creek that has a few grassy clearings where deer often come out at night.

Being Spring there was every chance that a silly yearling that’s been kicked off mum before she calves, might be wandering about chewing new grass shoots. We found a good spot to watch over some clearings and sat on a log for half an hour but nothing showed up. With only 10 minutes light left we shifted positions by creeping through the bush to look out onto the next clearings further up. As we edged down a deer trail towards the grassy flat I noticed a silly yearling munching happily about 50 meters away. The deer was tucked in close to the trees on the edge of the clearing which wouldn’t allow a clear line of sight if we walked out onto the grass. I tried to get the rifle positioned so that George could take a shot through a gap in the trees, but the view was obscured when the rifle was rested. I asked George if he’d like me to go ahead and shoot the deer and he nodded massively in agreement, he was just so keen to see the yearling on the deck. So I took a standing shot through the foliage and whacked the unknowing little deer right through the back of the head. 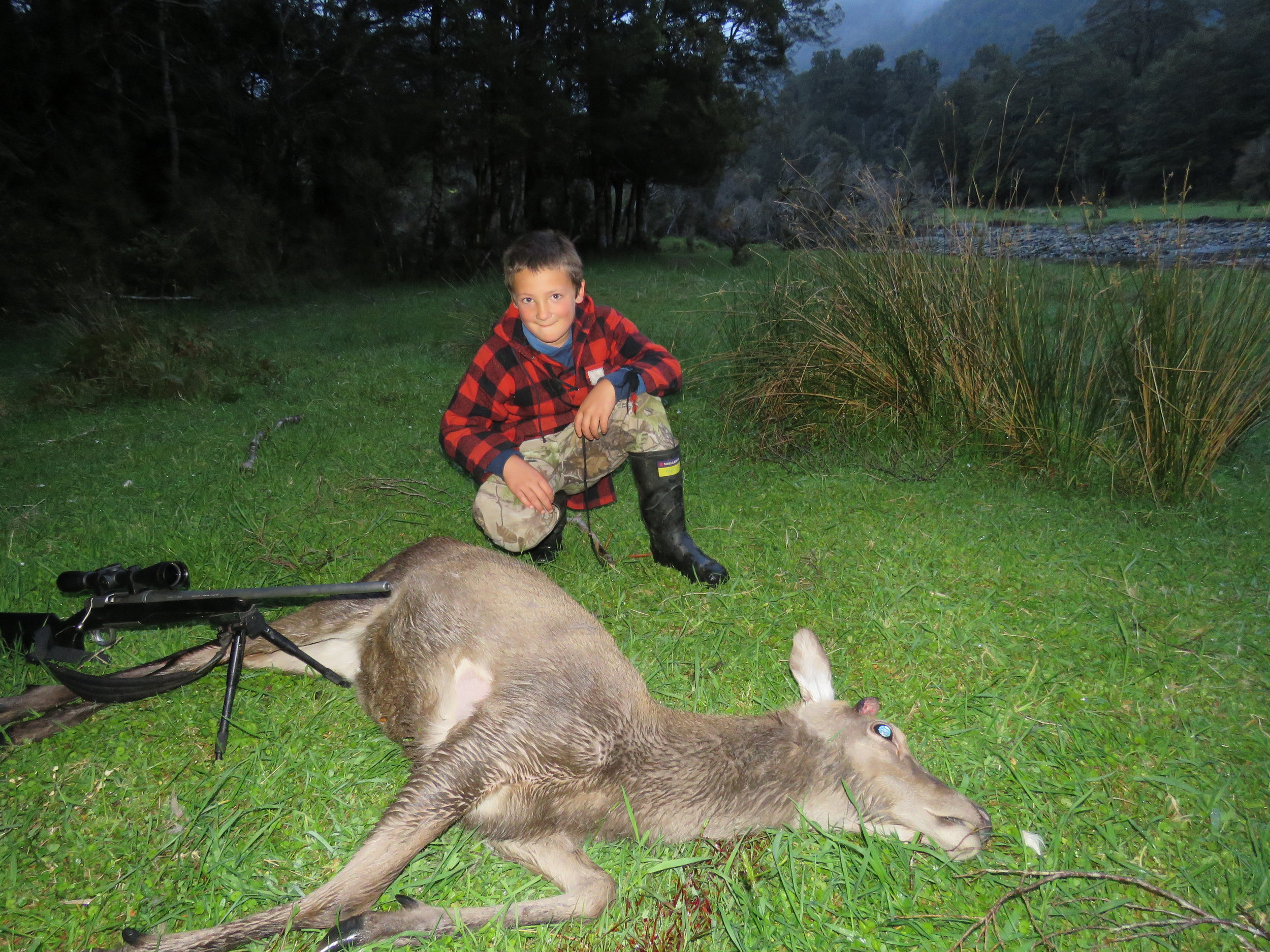 George Monk with the yearling red deer, caught out on the Spring growth late in the evening.

We made the rifle safe, then walked out onto the grassy clearing to find the yearling in its last throws. George is always fascinated by the gutting procedures and I hope he was taking good notes as it will be his turn soon enough. Now being such a little yearling and the fact that I was still recovering from knee surgery, I figured that George might as well do the carrying. It was a pretty big ask to get him to carry something that probably weighed as much as himself but George was up for the challenge and he put in a mammoth effort to get us back to the hut, with a little bit of help from his uncle. 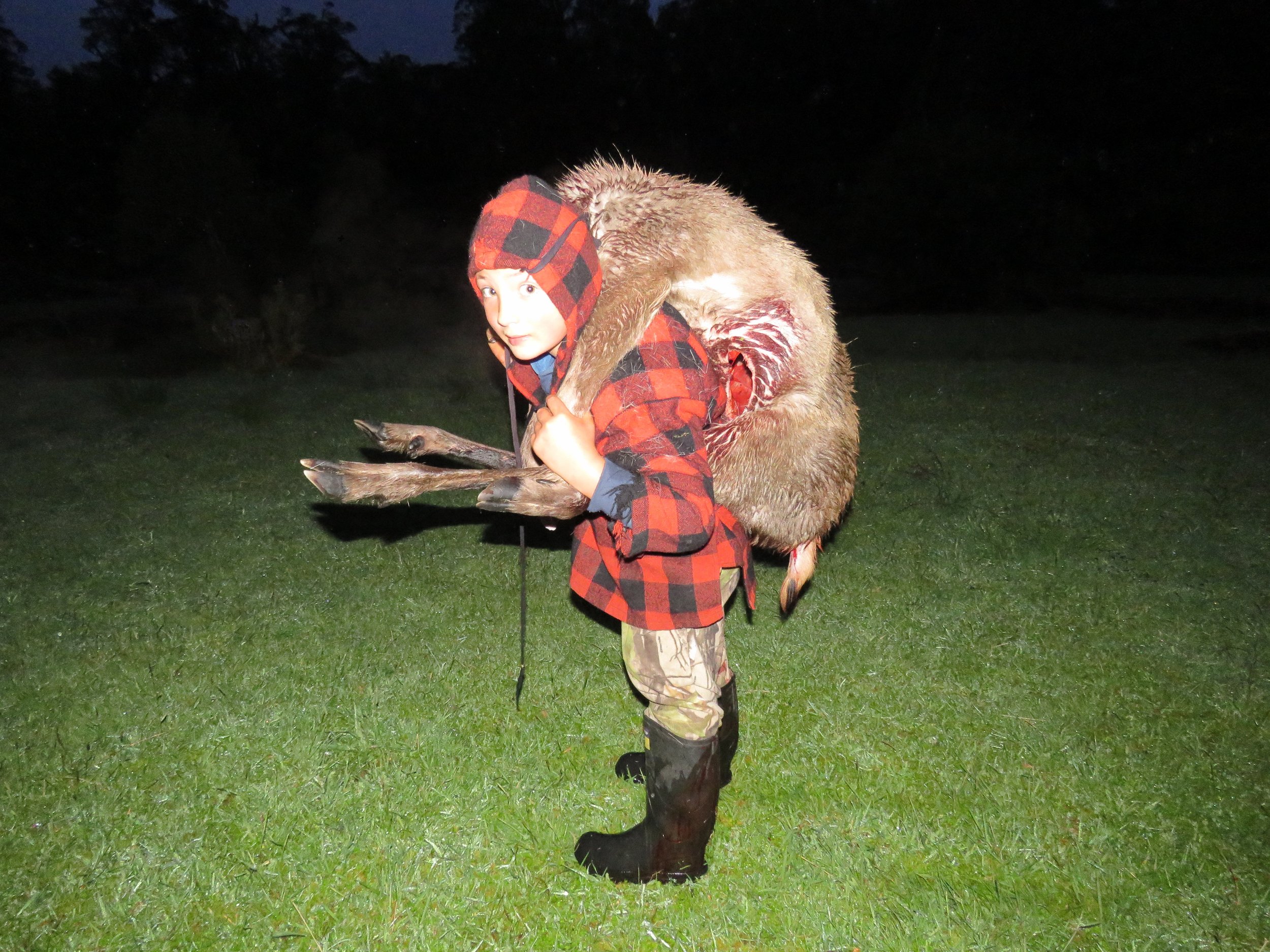 Just the right sized deer for a seven year old to carry out. 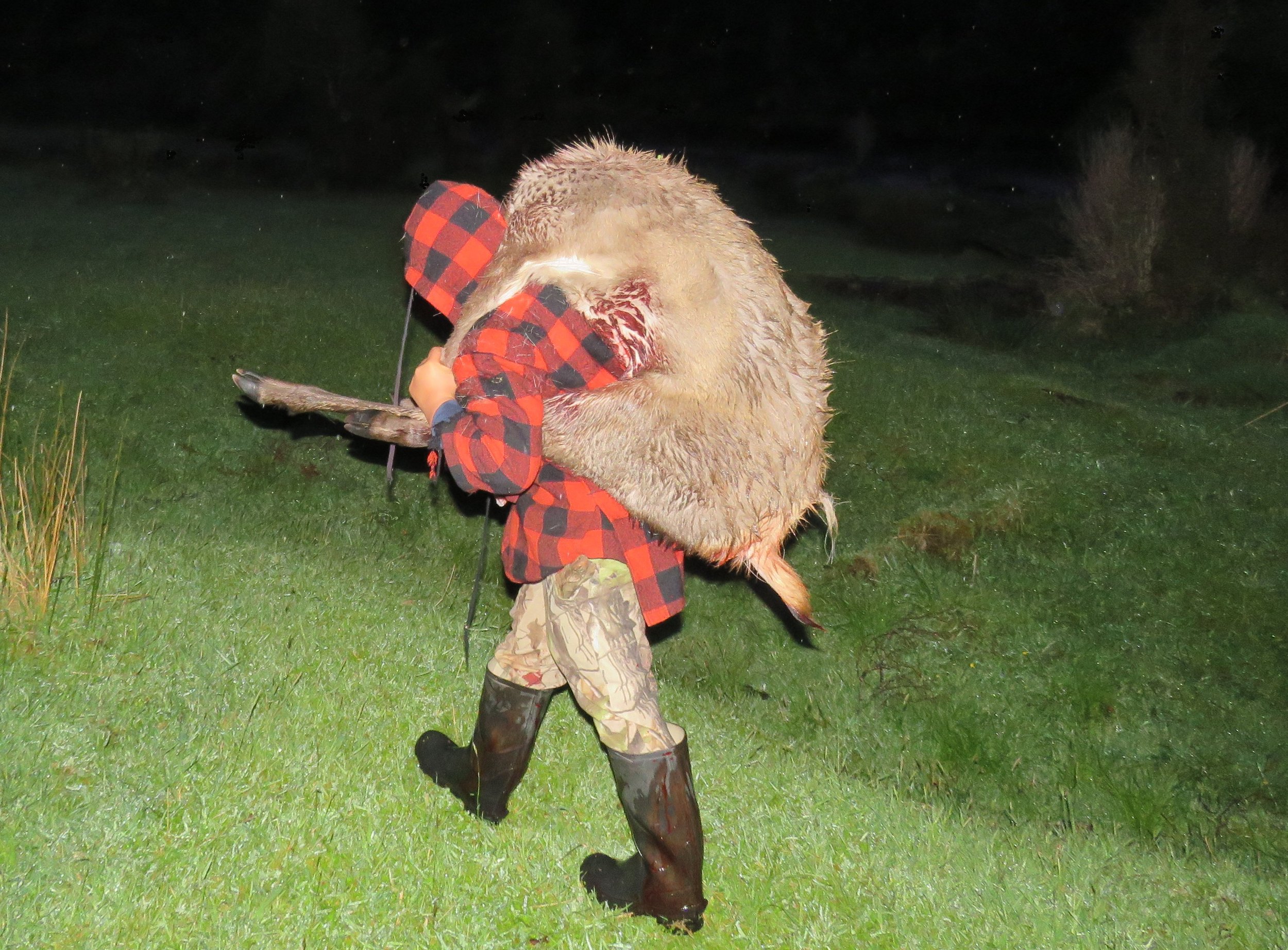 George put in a mammoth effort to help get the deer back to camp.

We had a comfy night in the hut and woke early to rain on the roof. George was keen to check the possum traps and was up and dressed quick smart. It looked like the bread had done the trick as one of the traps had a big fat ‘coon caught in it. George did the donking honours and I showed him how to go about plucking the fur and explained what it might be used for. 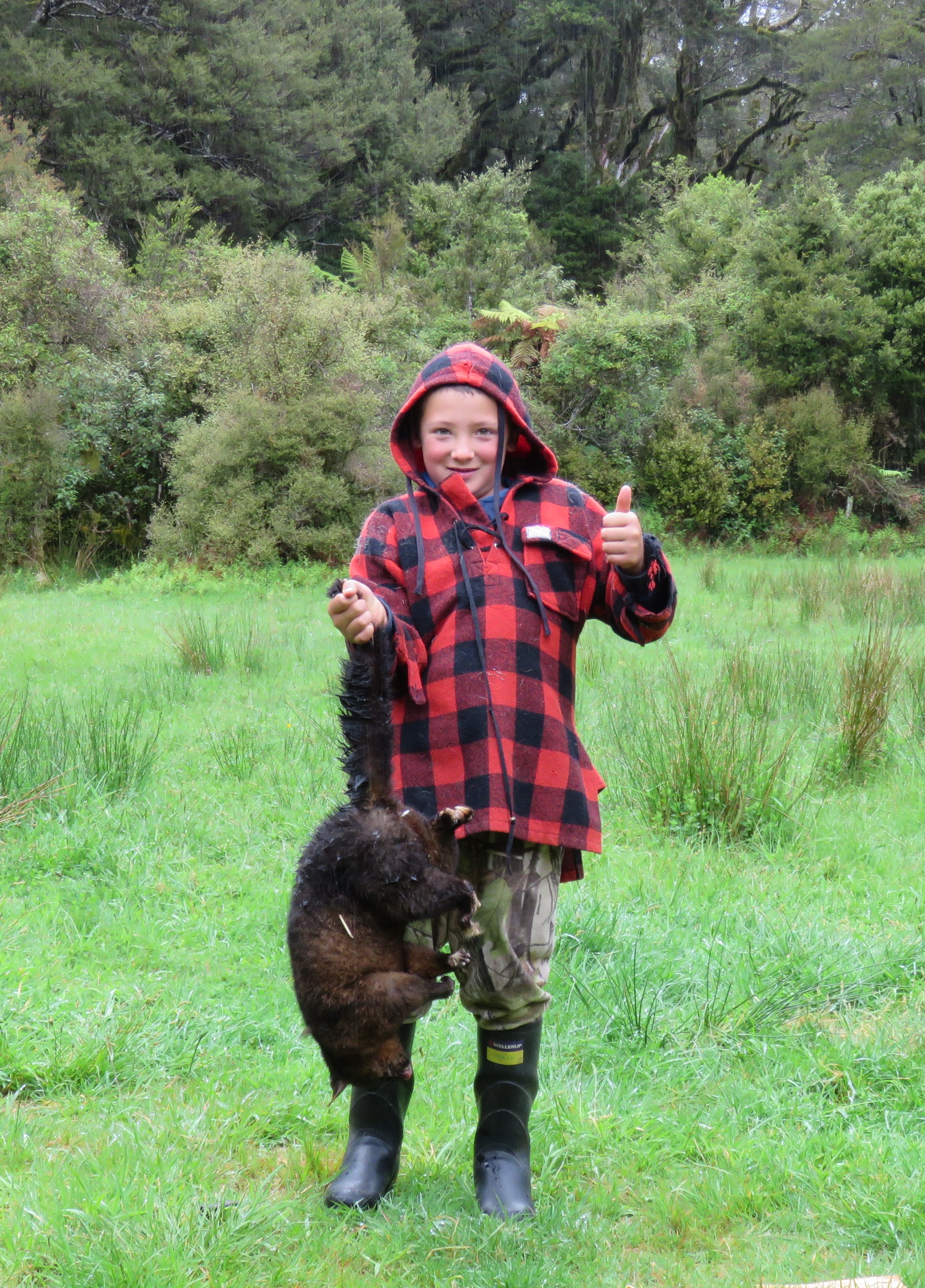 George with his trophy possum that he caught in a leg hold trap. 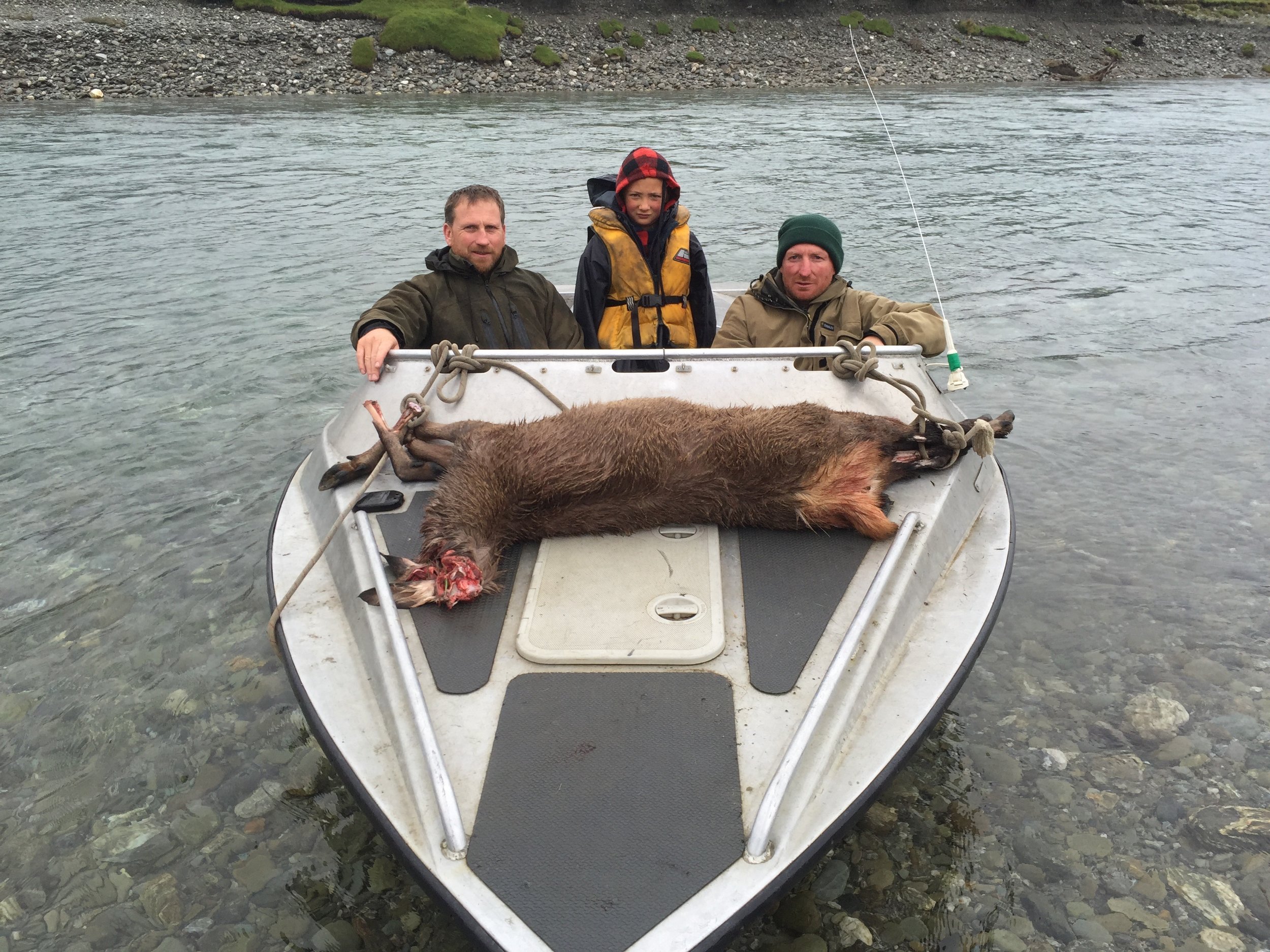 The jet boat ferry arrived and we headed back down river to set the whitebait net and continue our west coast outdoor activities.

George ended up with a decent pile of venison BBQ steaks and a feed of white bait to take home to his family. I don’t reckon it mattered that Serious George missed a day of school because there’s no better training grounds than the hills, the bush and the rivers.