Like all good hunting trips this one begins in the early hours of the morning, winding our way through the darkness this time heading west for the 2016 thar cull. After a must have pie and coke from the local servo we rolled into James Scotts hanger, loaded our gear from the truck to the helicopter and away we went off into the mountains. 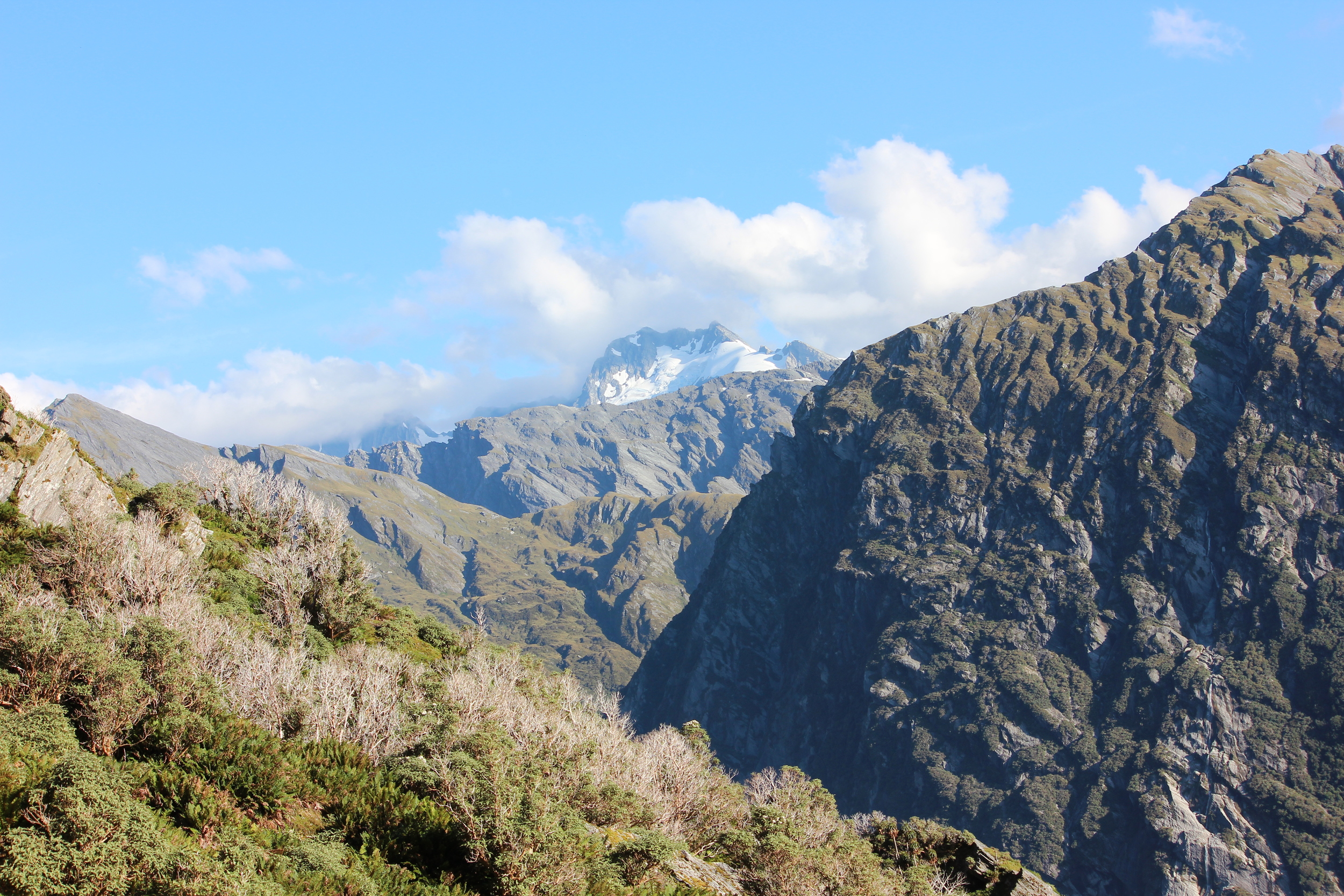 Our flight this time was a short one landing on the tops half way up the true right of the Karangarua River. Out with the gear and up with the tents as the chopper buzzed off down the valley a standard start to a promising weekend. Being mid-day we resisted shouldering rifles and heading for the hills and settled for hiding in the shade until the temperature dropped 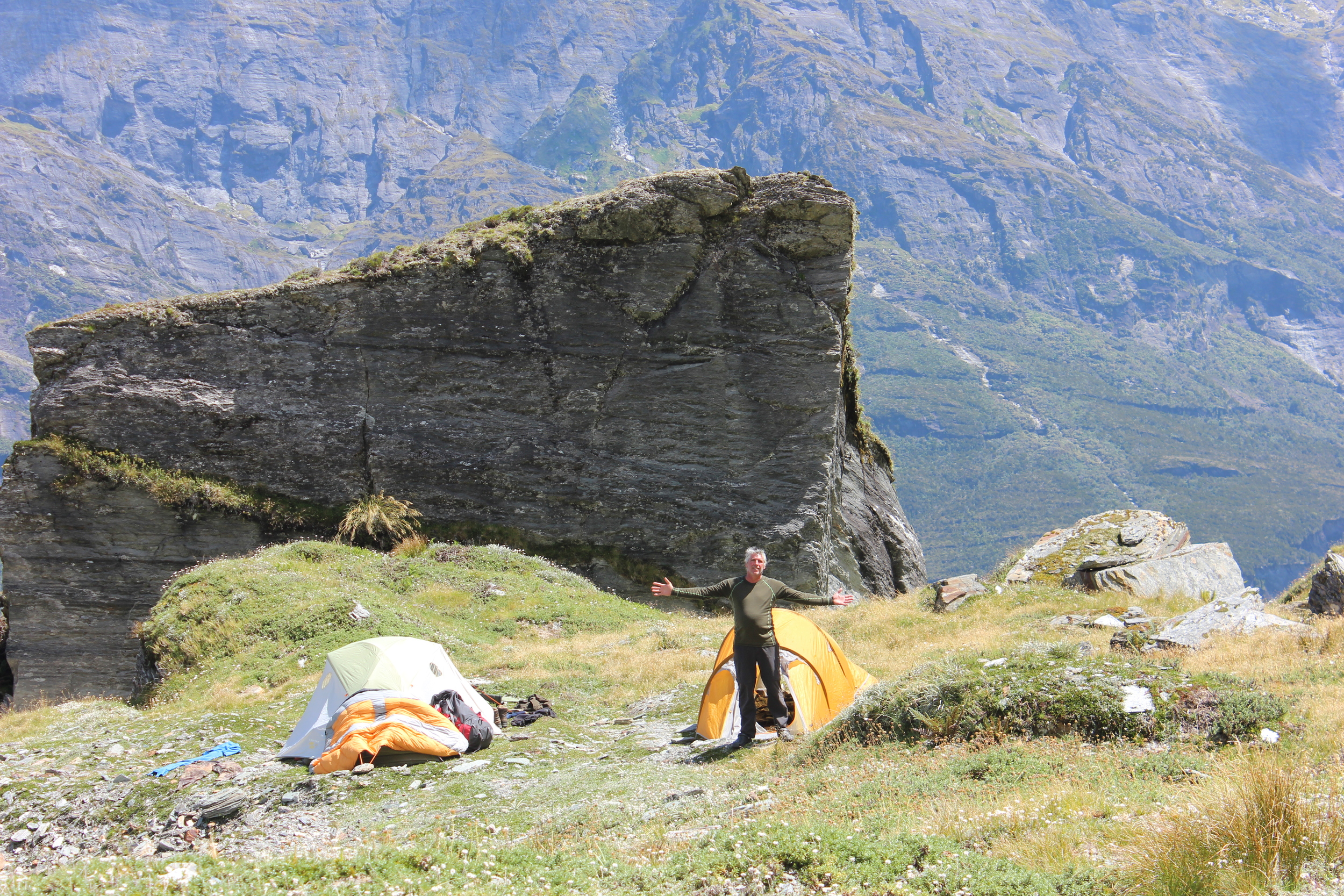 Eventually we broke camp and walked straight into a wall of fog. Despite obscured vision we were quick to find some Tahr for Jamie and Gary to have a crack at, while I mooched on in the opposite direction. Hearing a few shots ring out I waited patiently on a prominent ridge praying for the fog to clear. Although my prayers remained unanswered, a handful of Thar appeared not 15m away and all were quickly dispatched. Not ideal conditions but a good start nonetheless. 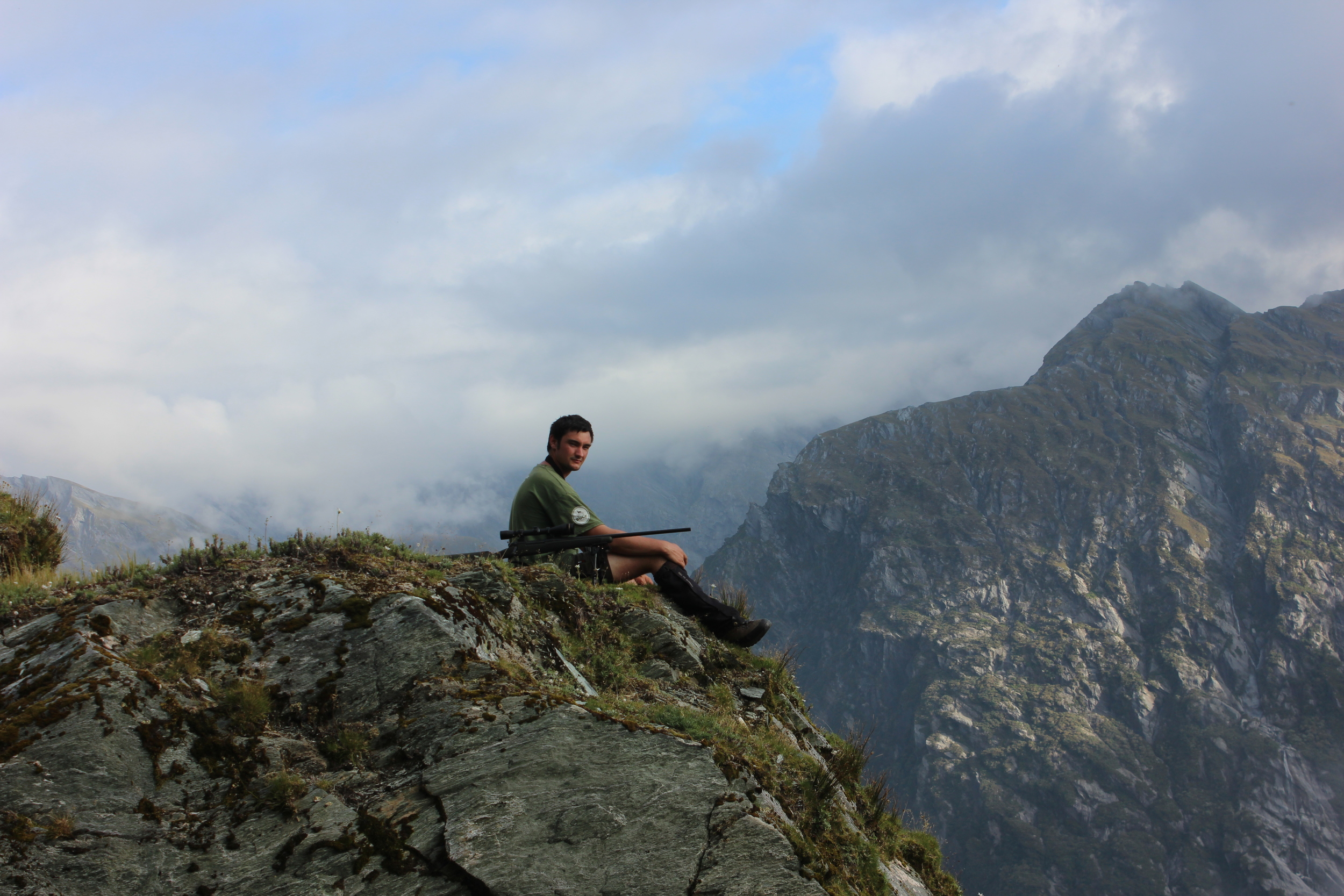 Day two saw a few Tahr taken in the morning and the usual day time hours spent hiding from the sun. Gary and Jamie decided to hike out of the basin and explore some of the surrounding area and headed off around mid-day. Having the basin all to myself I decided it was a perfect opportunity to attempt shooting a Tahr with my bow. 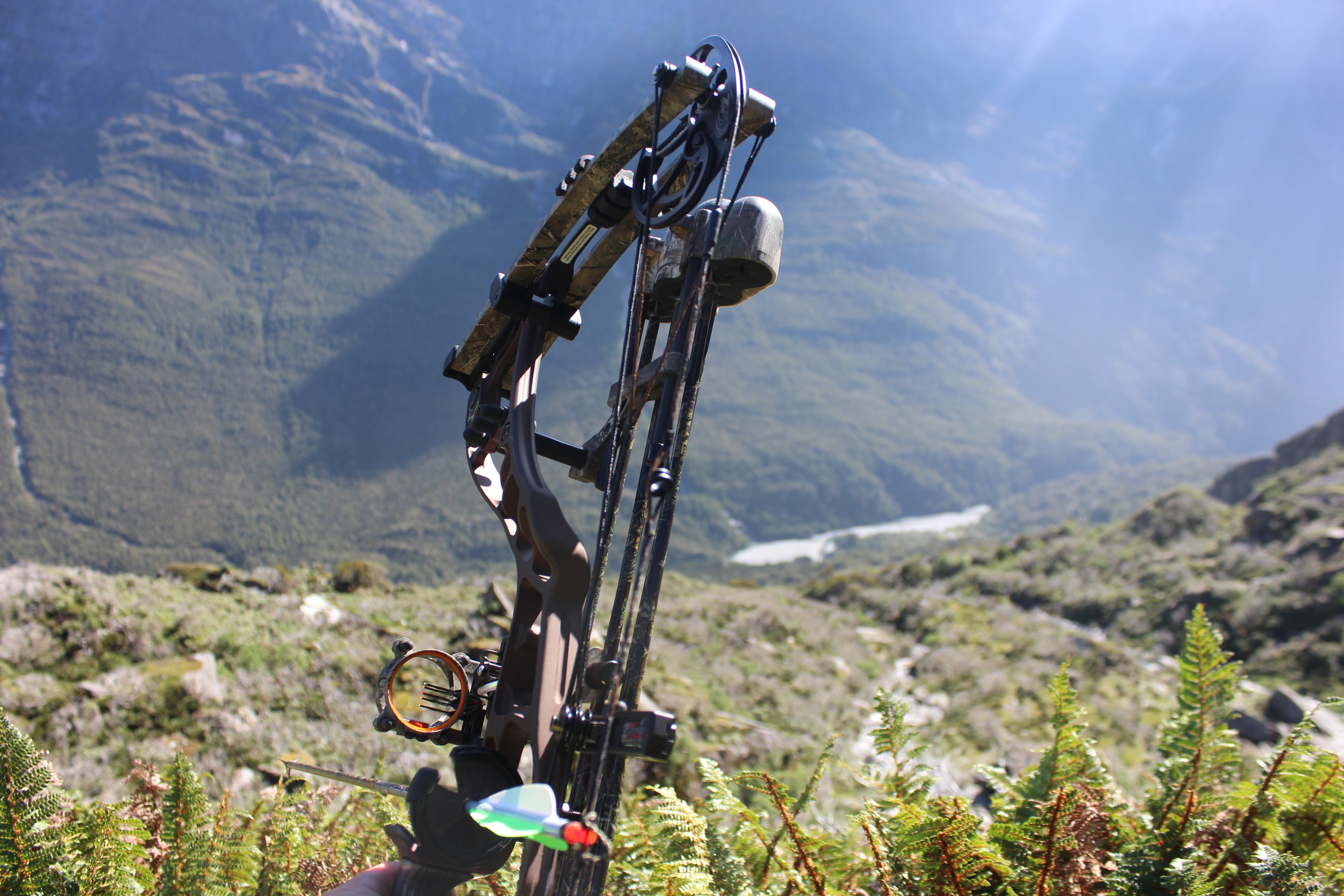 Geared up I headed back to my patch of fern from the night before and there I waited with the sun beating down on me. Eventually a Tahr emerged from the scrub below well out of range for the bow but presented a good opportunity to secure some nice footage. As I was busy filming my heart skipped a beat when that all familiar chirp echoed from behind me. Slowly I put down the camera, picked up my bow and turned to find a lone Tahr only 5m away. I drew back following her until she stopped conveniently on a rock then released sending the arrow in one side and out the other dropping it on the spot. 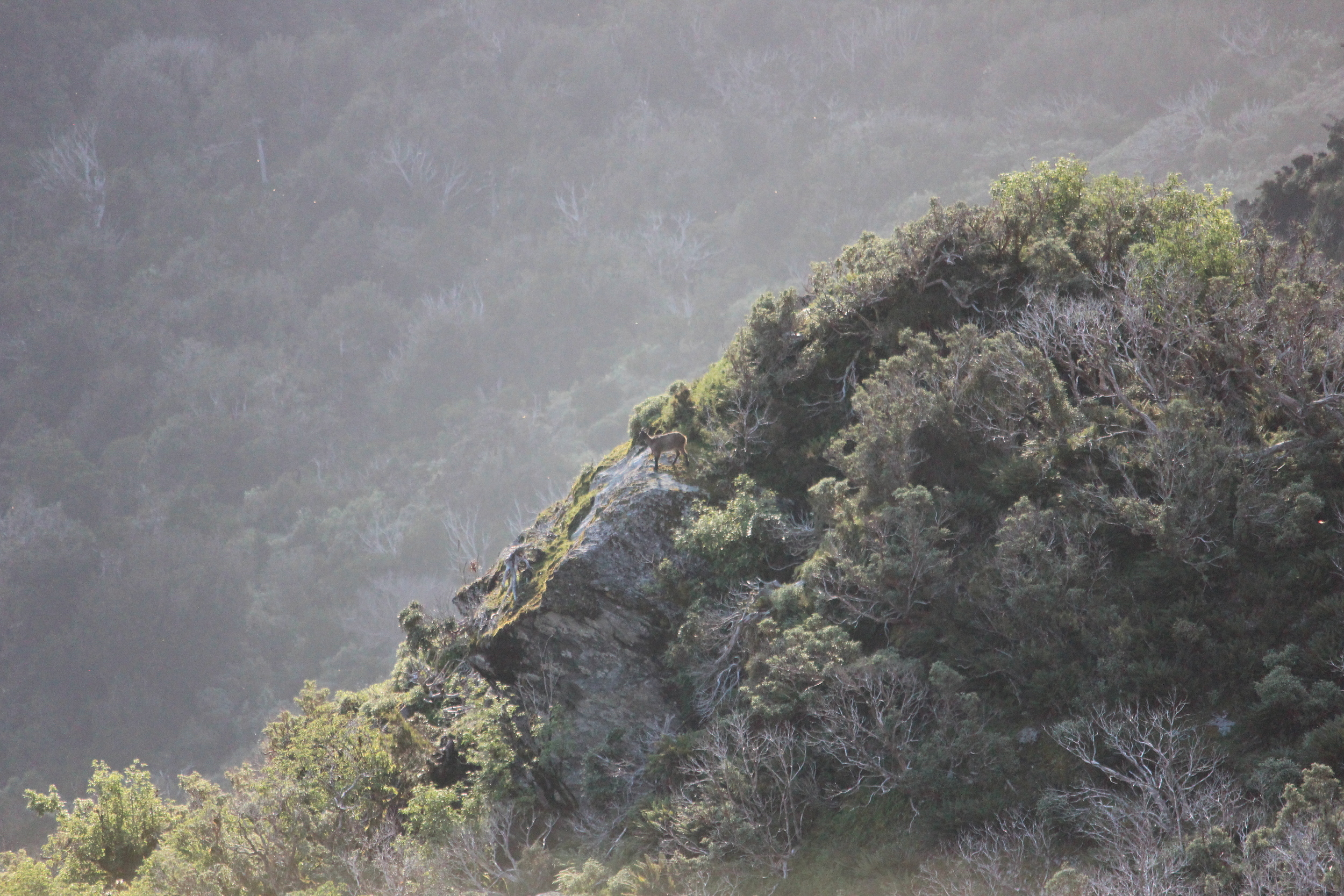 Maintaining my composure I returned to continue filming but the Tahr had disappeared. I started packing up when another chirp whistled out extremely close. I knocked up and drew back before poking my head over the ridge where the Tahr was skipping along the rocks below. Again the Tahr stopped to look back only to be greeted with an arrow that passed straight through into the rock behind and exploded into a million pieces. The Tahr didn’t make it more than 5m ending another solid evening in the Alps. 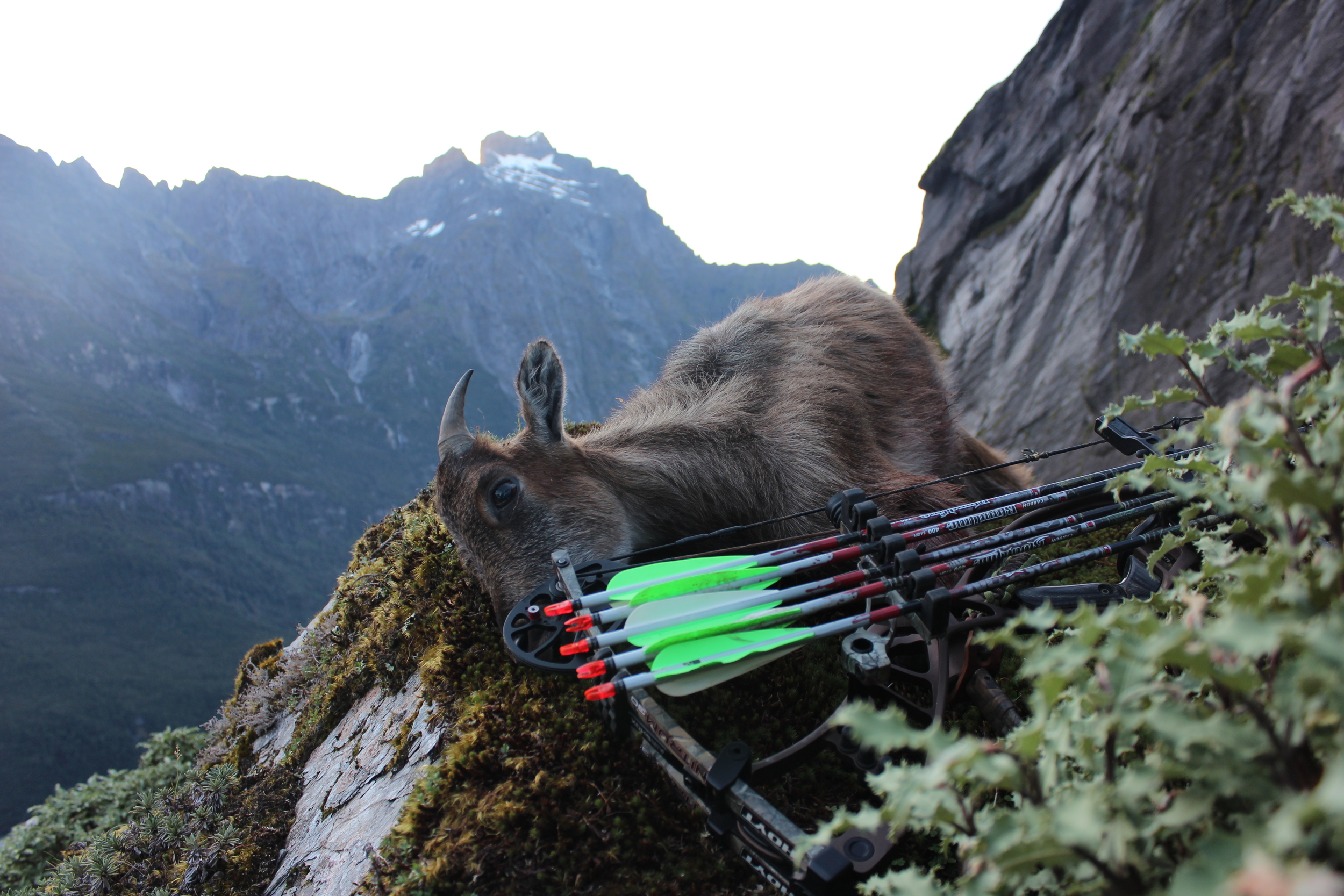 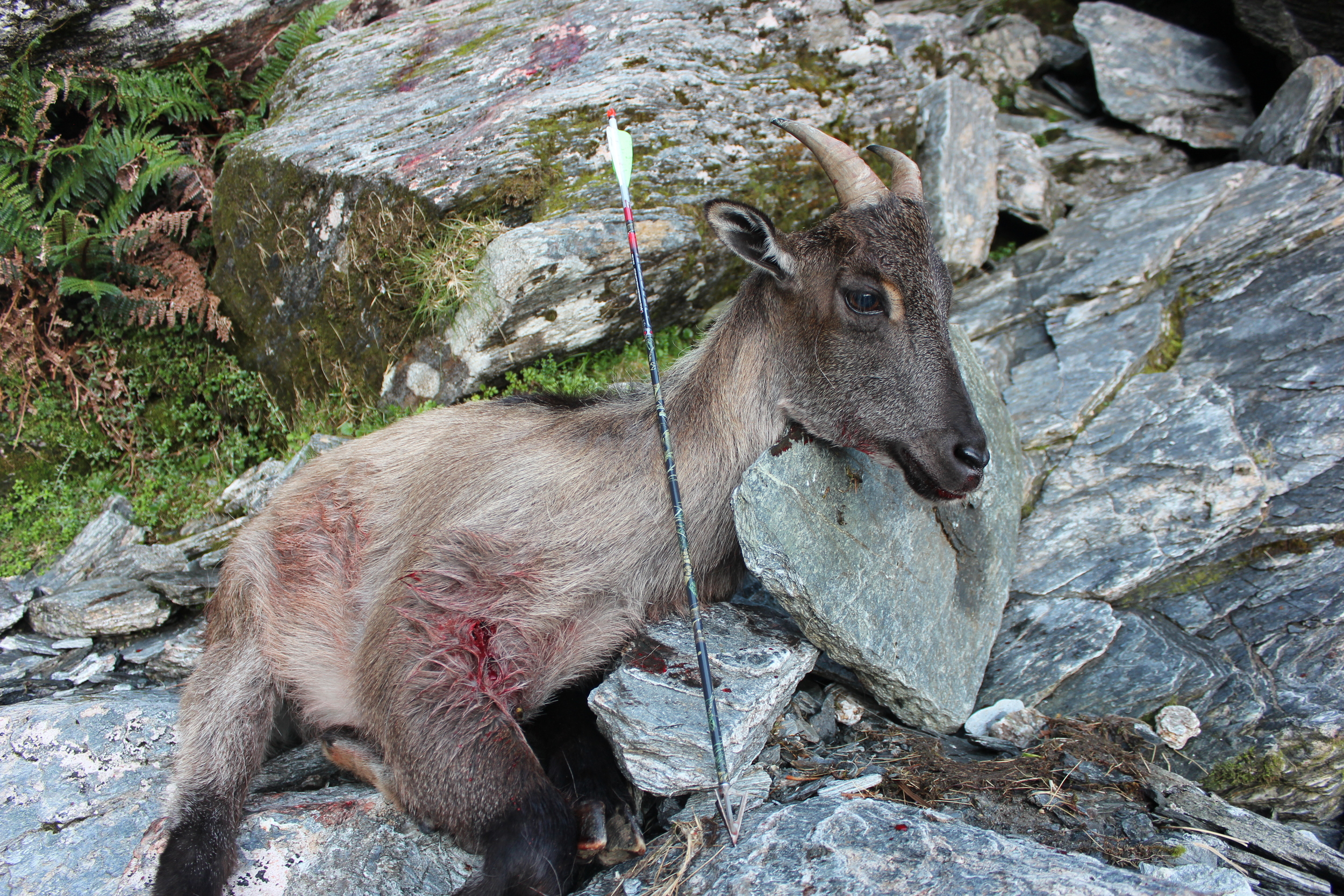 Gary and Jamie didn’t arrive back in camp until the early hours of the morning earning a well-deserved sleep in, both shooting numerous animals on their excursion. I on the other hand was up at the crack of dawn heading for Tahr country. I made it less than a hundred meters before the first Tahr fell, cloud cover and a crisp cool morning perfect conditions. I continued on towards the valley floor cleaning up pockets of Thar until setting up on a nice perch overlooking numerous gutters and faces below. Everywhere I looked Tahr were appearing and I comfortably fell into the routine of range, dial, shoot and reload. 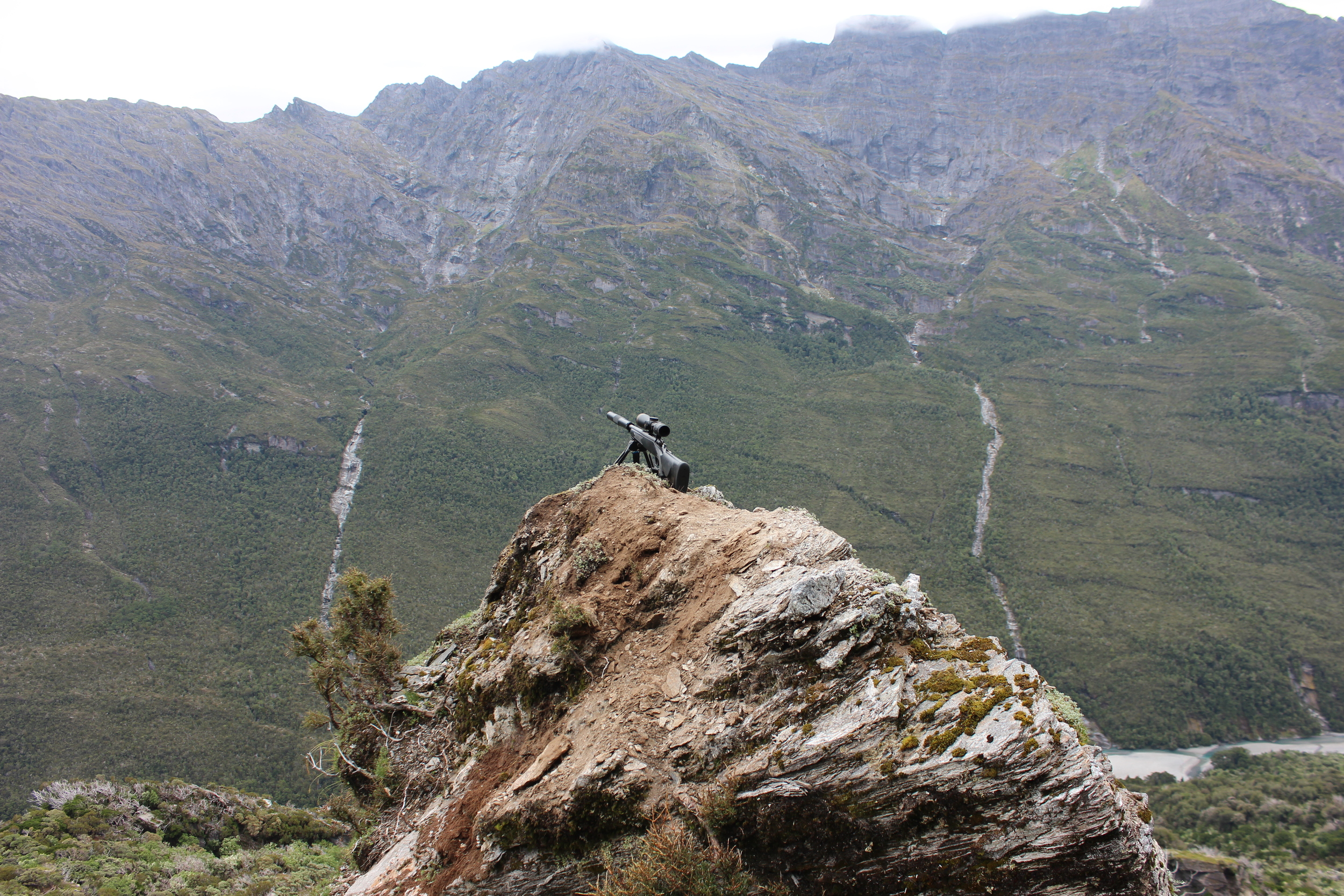 Many more Thar were taken Sunday night as Gary and I found a good vantage point picking off Tahr on the opposite bluff system. Another after dark hike and a few beverages to finish off an action packed weekend. The following morning the chopper was back and before long we were spinning yarns in the car park. Our team accounted for a total of 51 kills a solid effort towards keeping these majestic animals in check.