From Father to Son

Aleksandr Solzhenitsyn once wrote that “as the fathers live, so the children play”.

My eldest boy was probably only a couple of years old when he first began stalking the deer that infested our hallway and the wild pigs that had made a home under his bed.  I'd bring up the rear while he tiptoed after rabbits with his rifle (a Glad-wrap tube), but he'd usually send me in first to take down the scary giant bears that were living in the walls of his bedroom.  As soon as his little brother achieved ambulatory status, he was tagging along too.

Of course, it wasn't too much longer before 'Thing 1' and 'Thing 2' began to express an interest in going hunting for real.

I learned early on that when you take your kid(s) hunting, you must do so with the understanding that it is ostensibly for their enjoyment, not yours.  That, and you probably shouldn't hold your breath that you're going to have anything new to put in the freezer when you get home.  This new reality took me a while to get used to......

You see, one of my favourite parts of any hunting trip is the solitude and the silence.  Hours can pass without a word being uttered.  Of course, with small children in tow, silence and solitude usually get chucked out the window long before you get anywhere remotely near the hunting grounds.  Many of you will be familiar with such heavenly choruses as “Are we there yet?”, “Daddy, I'm tired”, “My feet are sore/wet” and “Can we go home now?”. 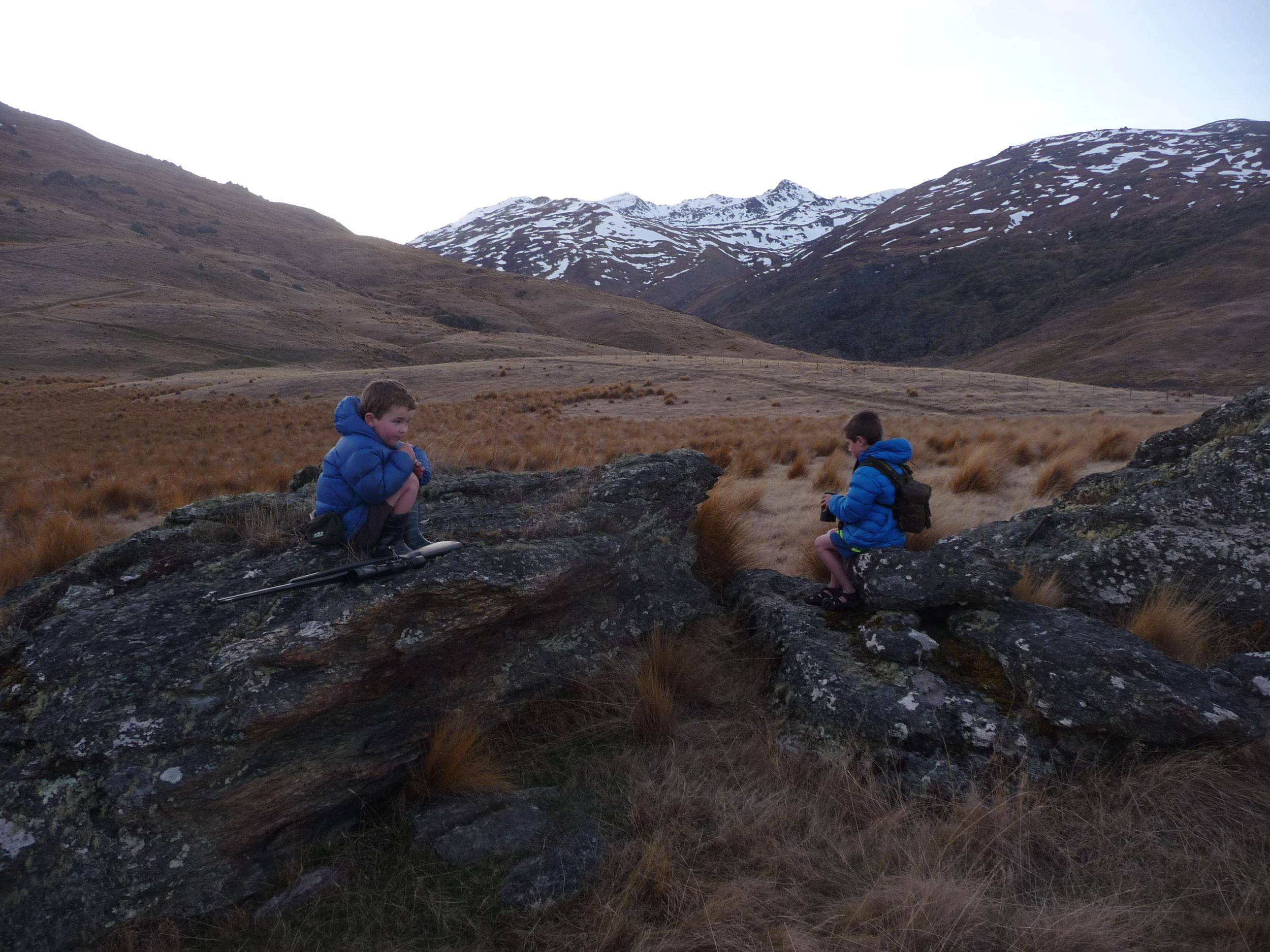 Then there's the fact that they simply can't move as fast or as easily as you.  So you have to move at their pace rather than your own and you have to restrict yourself to terrain that they can handle, rather than terrain which is perhaps likely to be more expedient or more productive.  Drinks breaks, snack breaks, toilet breaks and rests are usually more frequent too.

I'd be lying if I said there haven't been times when I've wished I'd left my offspring at home – when yet another rabbit (or dozen) has run off after hearing them, or when we're taking several lifetimes to get within range of our quarry because someone keeps getting thistles stuck in their socks.  In these moments I sometimes remember to remind myself that, in the not entirely distant future, it'll probably be me inquiring as to nearness of our intended destination and me requesting the frequent toilet breaks.

But at the end of the day (even if not always at the start) there's something pretty cool about taking your kids hunting.  Indeed, there's something pretty cool about doing just about anything with your kids.  Whether it's stacking firewood together, cleaning the car, teaching them how to play the guitar or how to hammer a nail – there aren't too many activities that can't be made better by sharing them with or teaching them to your children (well.........there is one I can think of......but perhaps the less said about that the better).

I read somewhere once that children spell 'love' t-i-m-e and despite being a tad cheesy, I'm pretty confident it's true.  Given their age, I can't really be sure of just how much my own boys enjoy going hunting per se.  It could well be that they simply enjoy going hunting – indeed, doing anything – with me simply because it is with me.  But I'll take it.  I quietly suspect that what they really enjoy is getting to spend extended periods of time alone with their Daddy, doing something that they know he loves and knowing that if he's sharing it with them, he must love them too.

Some of the most precious times I've spent with my two eldest boys have been when I've taken one or both of them hunting with me.  This has usually taken the form of rabbit shooting, but there have been a couple of times when we've gone after goats and one time more recently when we went for our first father/son wander in red deer country (I saw half a dozen deer – not sure if the boys really saw any of them).

Along the way I've had to learn and accept that the aspects of any given hunting trip that interest and excite me will not necessarily be the same aspects that interest and excite my offspring.  Numerous late afternoon rabbit shoots have taught me that the boys are often generally much more interested in cooking some noodles on the gas stove and eating them with their sporks on the side of a hill, than they are in watching me score some devastating headshots on unsuspecting rabbits.  And they're generally more impressed by an amateur anatomy lesson concerning the muscle structure and internal workings of a rabbit I've shot, than they are by the sheer number of rabbits that I've put down that day.

I suppose it's worth remembering that little kids can be pretty easily impressed.  A hundred yards can look and feel like a mile to them.  A rabbit knife for you and me may as well be a machete in their hands.  If they climb to the top of a small hill, they feel as if they've conquered a mountain.  Let them stack a few sticks together, and they've built Fort Wilderness.  And speaking of forts and wilderness...... 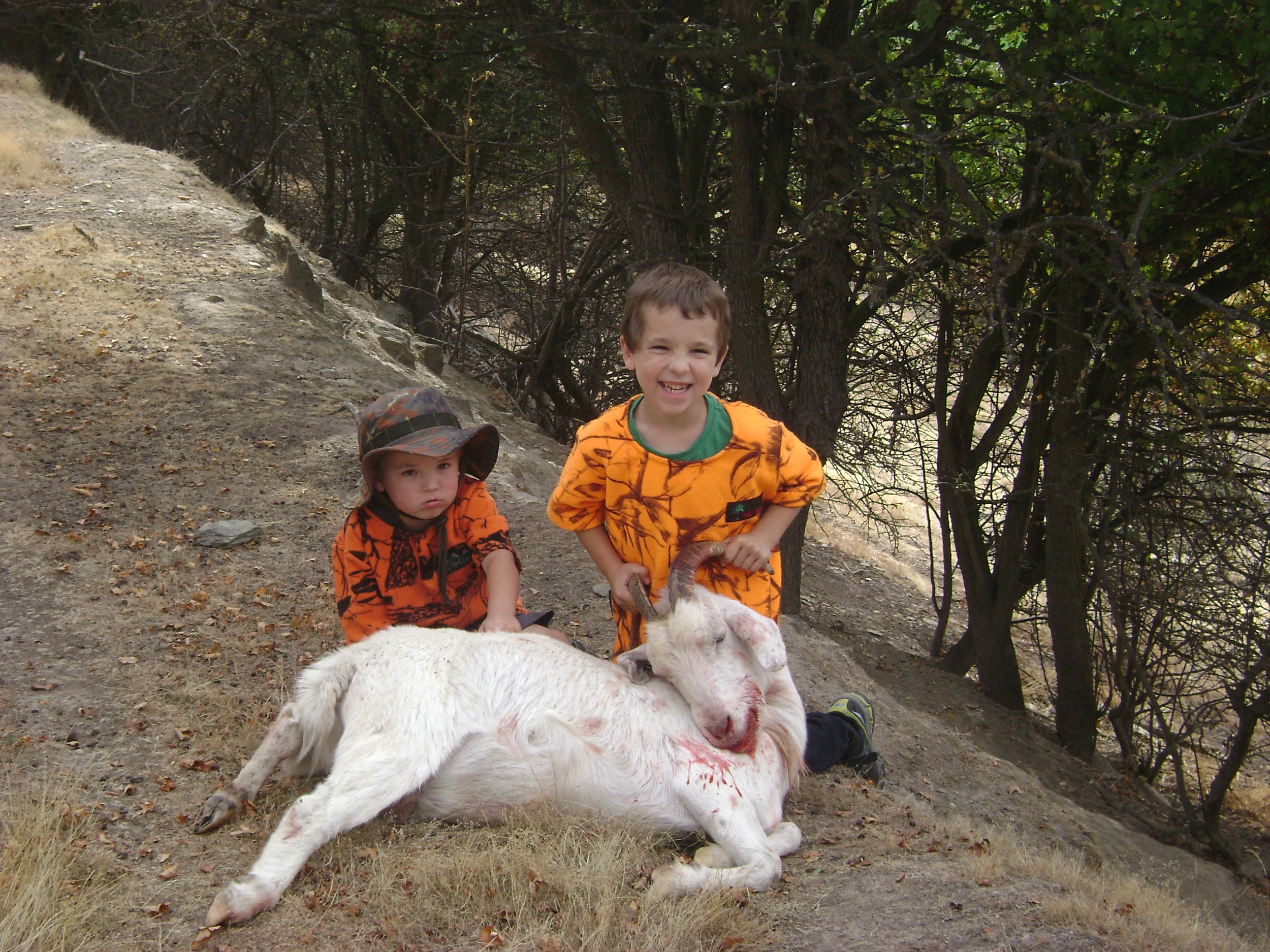 Little kids learn so quickly and easily – they just soak stuff up.  There is huge fun and satisfaction to be had in teaching our children outdoor skills while they are still little. How to get a fire built and going, how to skin and dress a rabbit, shelter building, putting up a tent – even something as seemingly mundane as getting a billy of water boiling.  All of these can be done within the context of a hunting trip.  Being a bit of a perfectionist myself, it can be a bit of a challenge to stand back and let my boys have a crack at something on their own.  But this is how our children learn......and how we learn too.

And I am often (hopefully not too often) surprised at just how genuinely helpful a child, even a small child, can really be. A while back I got a red stag and a hind and, having got both of them home in one piece, decided to have crack at doing a really good job of skinning the hind.  As it turns out, doing this with the assistance of a then 6 year old boy is actually a lot easier than doing it by yourself – #1 Son was able to keep the hanging carcass from swinging round all the time, making my job significantly more simple.  It also afforded him the opportunity to ask questions about how and why I was skinning the deer, what the different parts were, the entry and exit wounds, how submarines work, and whatever else ended up being on his mind at the time.  If I may say so myself, we did a really decent job of skinning the hind.  But more importantly, we shared a great time together. 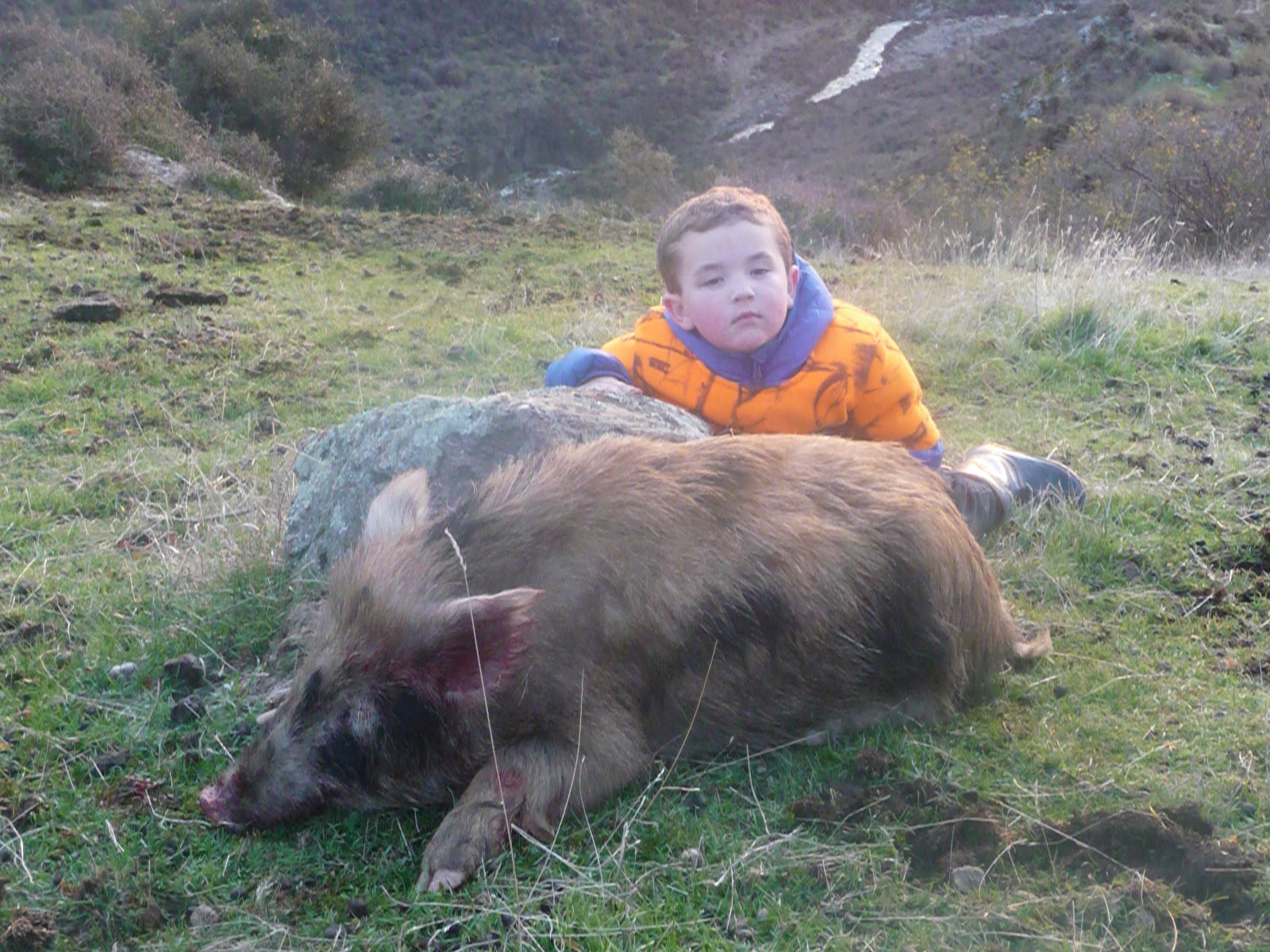 And great times with our kids are important.  But what makes great times with our kids even better, is remembering to keep a photographic record of said great times.  I say 'remembering' because while it's very easy to remember to take photos of ourselves standing over our dead quarry, looking all brute and masculine, it can be equally easy to forget to take photos of the other elements of a hunt – i.e. our companions and surroundings.  Ironically, my own track record is rather frustrating in that while I don't seem to have any issue taking photos of all the other parts of my hunting trips, particularly my boys if they're with me, I very often forget to get the camera out until a few minutes after I've begun gutting and/or dressing out my prey.  There is no photo in existence of me with my first stag (a tidy 12 pointer) – in fact there's probably as many if not more photos of other people with deer I've shot, than there are of me.

But I suppose there are worse problems to have.

I have no particular talent for photography of which I am aware.  But what I do have and am very grateful to have, is an ever growing collection of photographs of me, with my boys, in the hills, valleys and forests that make up so much of this fair (for the time being) land that we are so privileged to inhabit.  On a cold winter evening, it's nice to sit down with the laptop and scroll through said collection, reliving past adventures and trials.  How much more so for having shared them with my children?

One day, God willing, I'll be old – too old to hunt, too old to be likely to have much influence on my boys (or much of anything else), and too old to make up for any shortcomings I may have had as a father.  I like to think that in those days, if technology, circumstance and eyesight allow, I will be able to look back through the photographic record of my life and tell myself that, whatever my sins and failings may have been......I took my boys with me into the hills and did my best to impart to them my love of the wild.  That I tried to make them see that there is more to life than concrete, ultra-fast broadband and the All Blacks.  That I did what I could to nurture in them a respect and gratitude for the marvelous beasts with which we share this land, but also the skills and knowledge necessary to prey upon them in an honourable fashion.

I hope of course, that for the most part I am preaching to the choir.  But I also realise that some of us who share our adventuring, may do so grudgingly – perhaps out of a sense of parental obligation.  Others may be hesitant for various reasons, and others simply disinterested or even opposed.

For what it is worth, I would encourage you to be otherwise – if not for the reasons already given, then for these_

1. Giving your wife/partner a break from the kids will only score you points; and

2. If you take the time to teach your kids how to bring home the bacon, they may be more likely to remember to share their own bacon with you, when you are no longer in a position to do it for yourself. 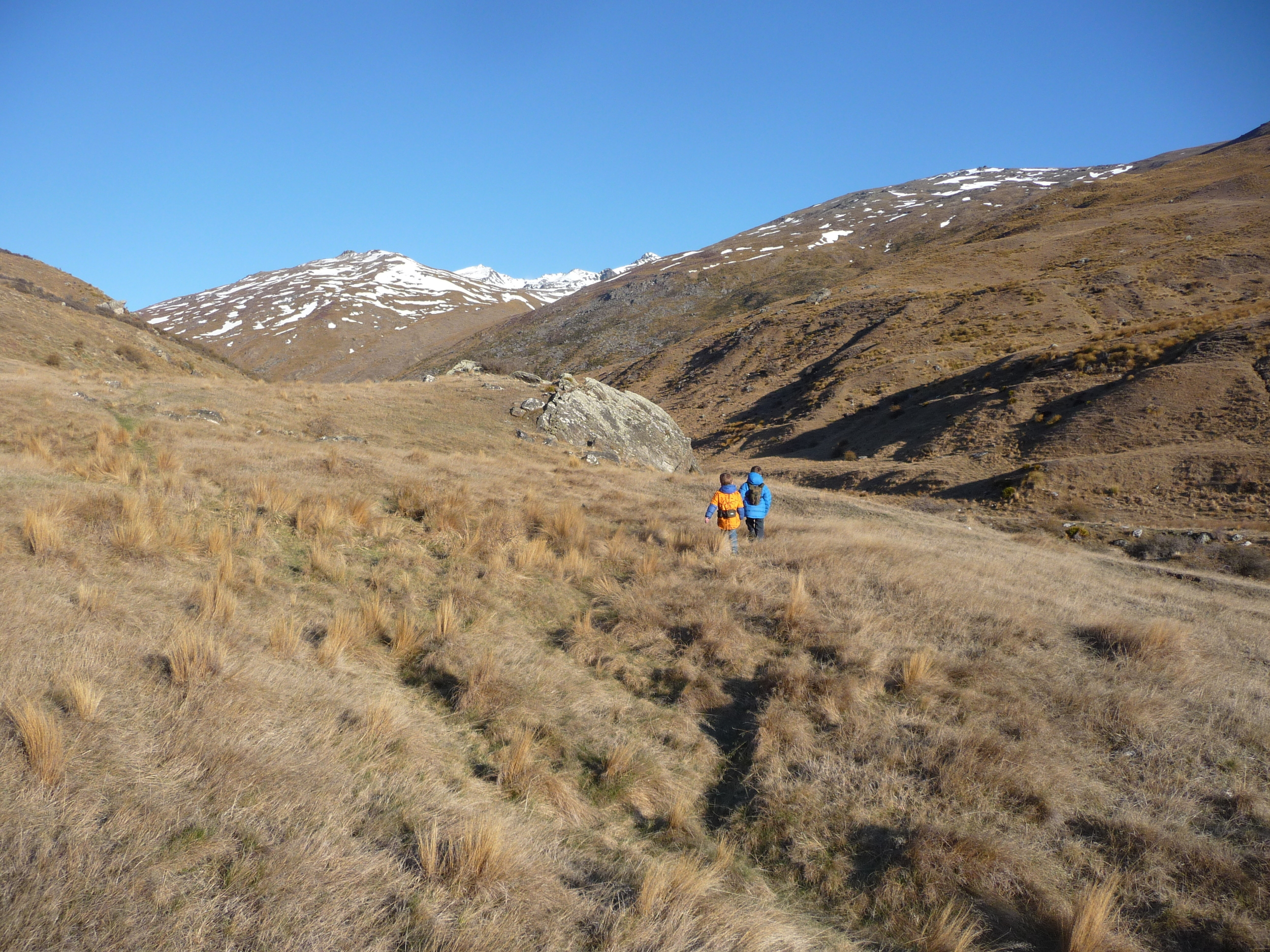