The day Barry Crump was seen in the 1980's TV ad donned in a green Swannie, puffing on a rollie and smashing the original Toyota Hilux up the roughest off road track they could find, was the day New Zealander’s fell in love with this ute. 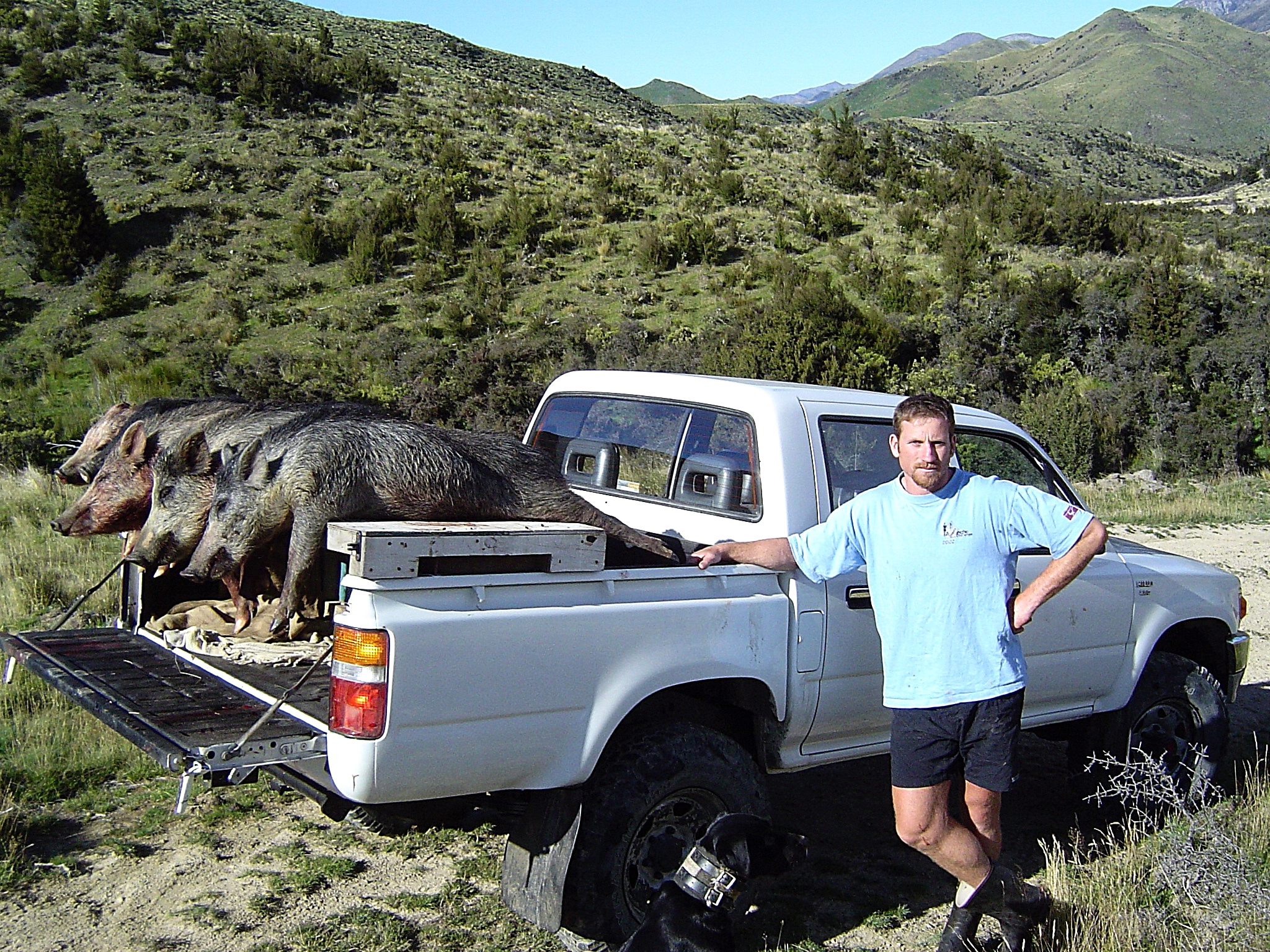 The author with an old pic of his 1998 Hilux, the day he picked it up from the used car dealer.

Several years later Toyota added a practical double cab and up specked the standard engine to the 4 cylinder 2.8 litre diesel and voila, the LN106 model was here! It was such a popular all-rounder for farmers, commercial companies and outdoor enthusiasts; that the LN106 Hilux remained pretty much unchanged for nearly 10 years. The tough chassis, solid beam axle and a motor that just wouldn’t give up was bolted onto a cab and deck design that every other ute manufacturer had no choice but to replicate. 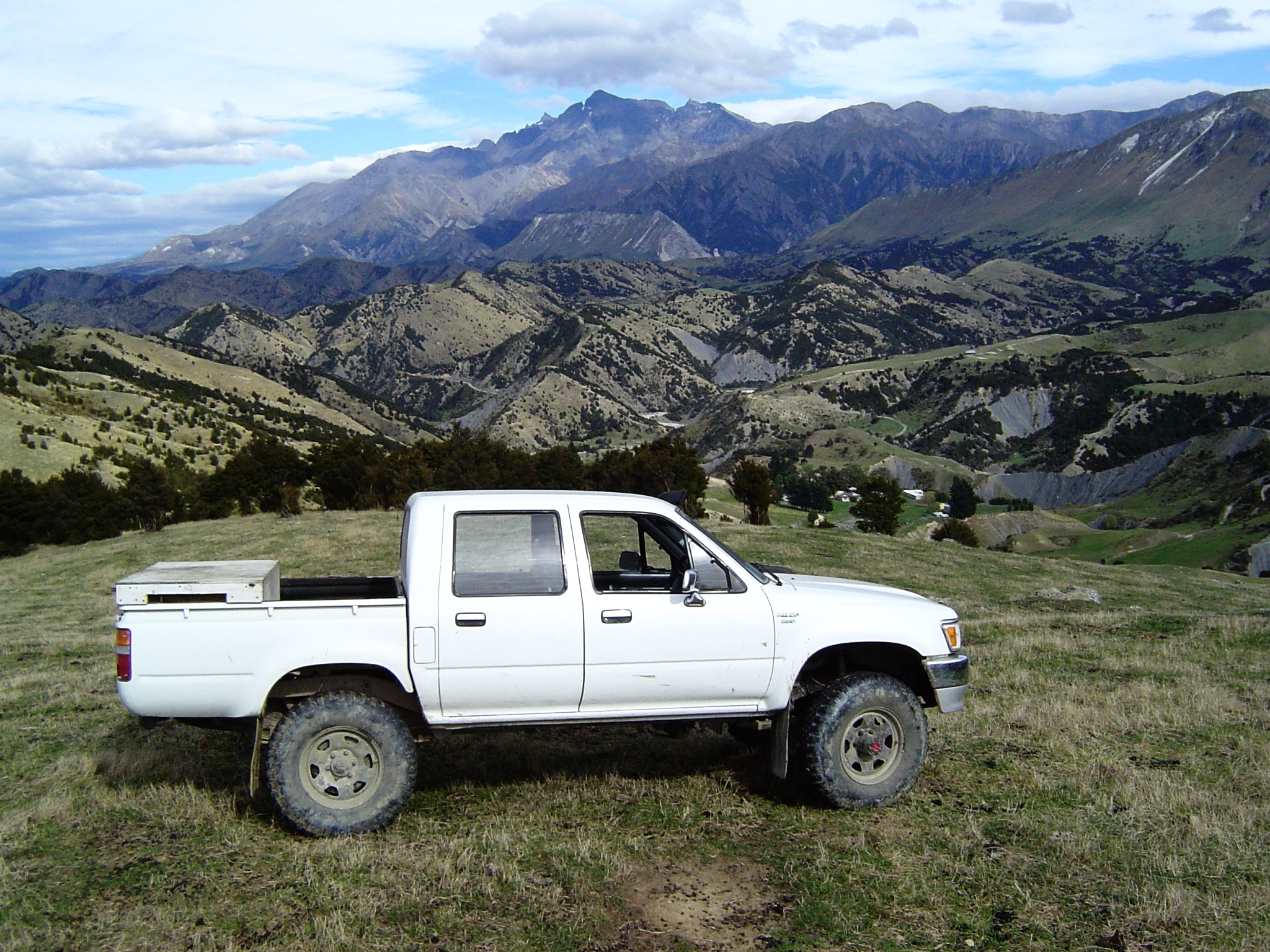 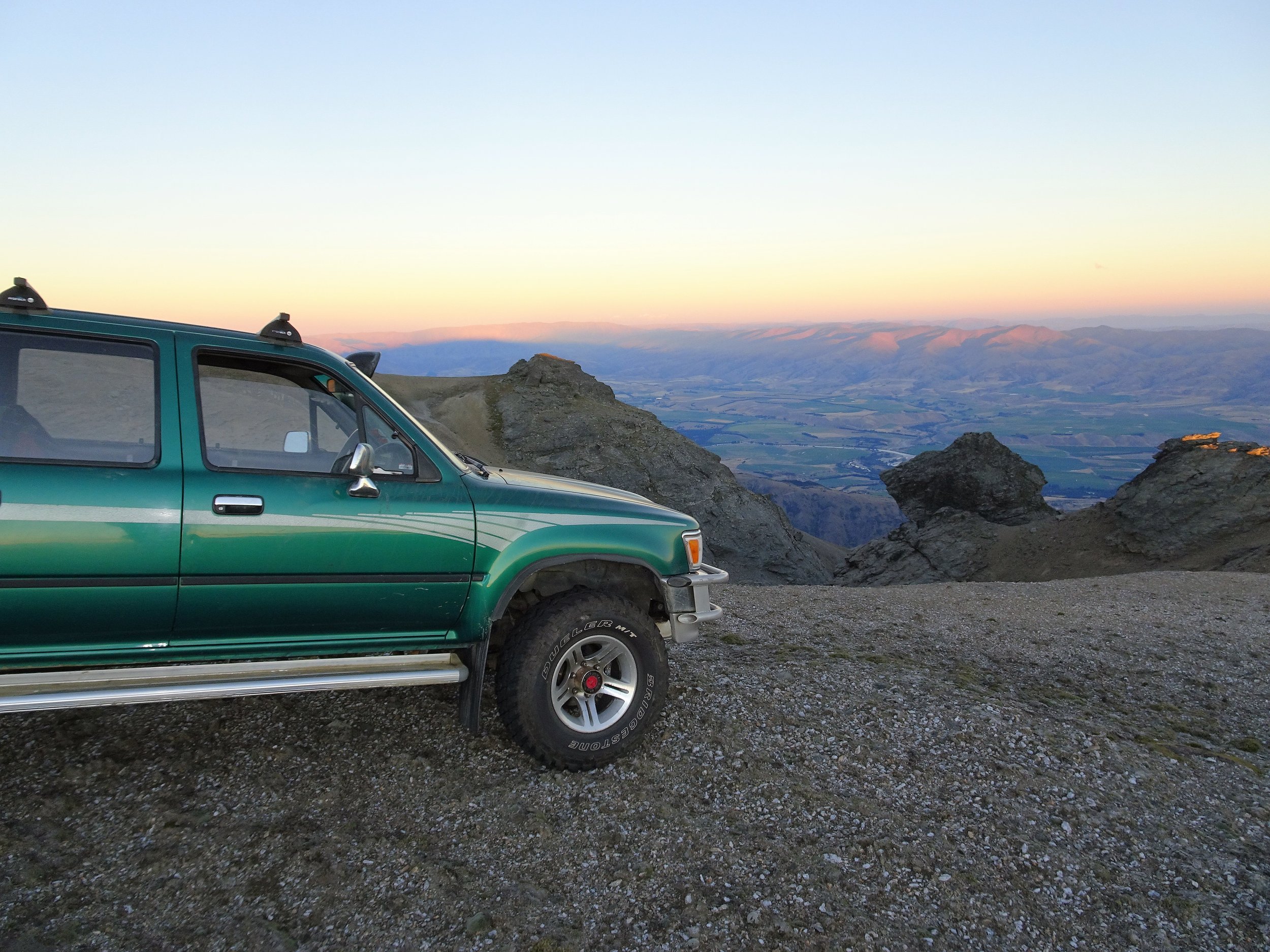 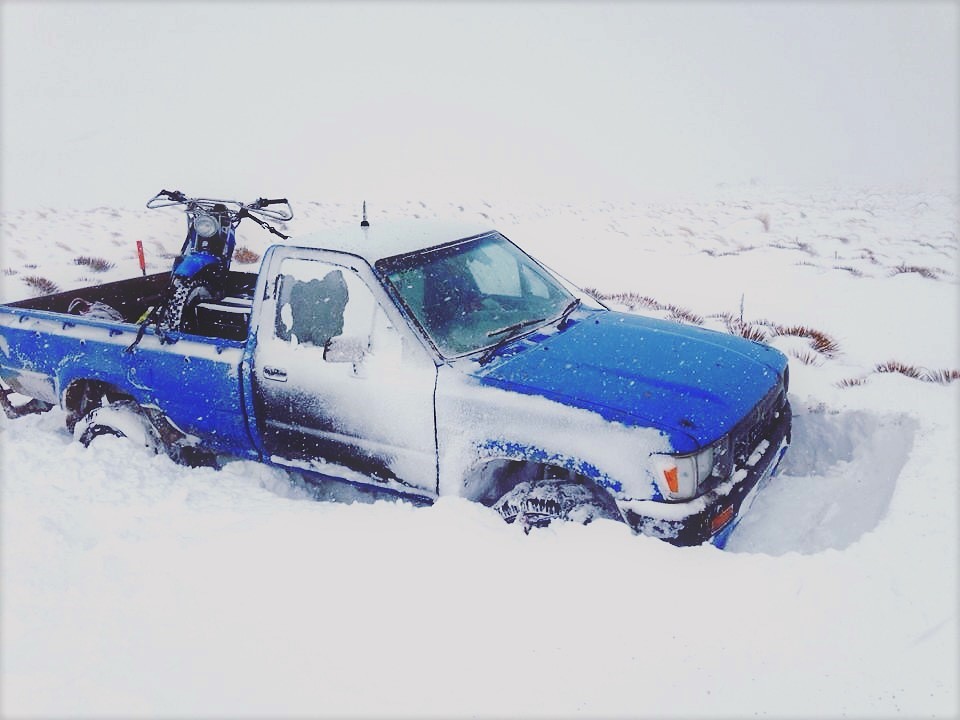 Jack Parr in a slight predicament 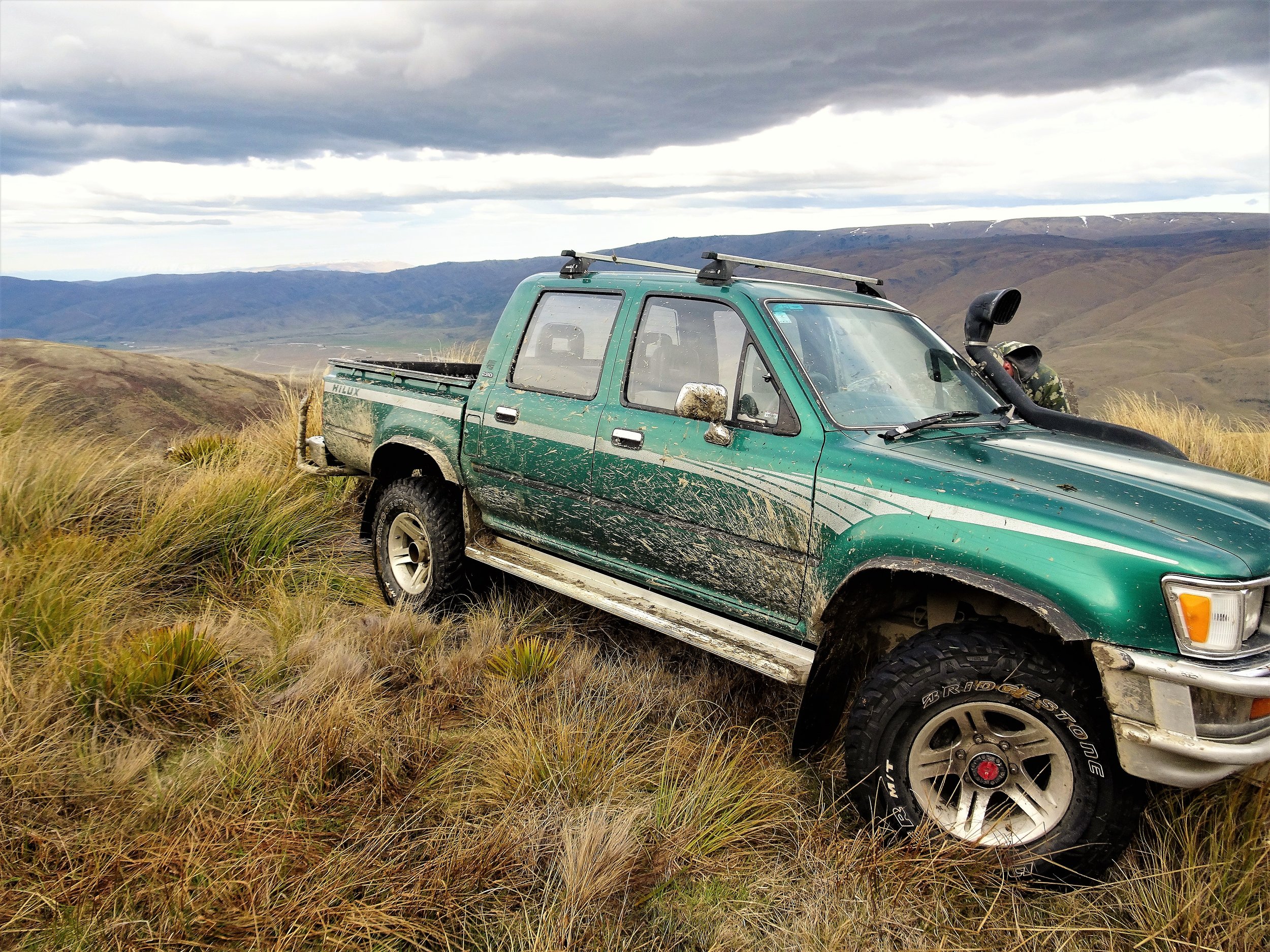 I was very fortunate to have owned two LN106 Hilux’s, a 1992 and a 1998. They gave me reliable service on hundreds of hunting adventures and even after 400,000 km, I’d still left plenty in them for the next bloke. It was a sad day for me to see the last one leave for a new home and it was nervous times heading out in my new fancy “plastic” truck. It is true that the modern utes are a 1000 times more comfortable and the turbo charged grunt gets you down the highways much faster, but when it comes to putting around in the rock and mud and over the rivers and up and down the steep terrain, give me an old LN106 any day! Of course there are still plenty of these old girls out there being used every day for work and play, but they are slowly becoming a less common sight and they seem to be getting more valuable as the fanatics come to realise that they are not completely immortal. On one of our recent hunting trips we decided to leave the plastic trucks on the sealed roads and go retro, with my mate Sparky dragging his old “classic” ’96 out of the back of the wool shed. We topped up the engine oil, stacked the pig dogs into the box, threw a trailer and quad bike on behind and pointed her South towards the Otago highlands that we hoped would be harbouring a few wild pigs and red stags. 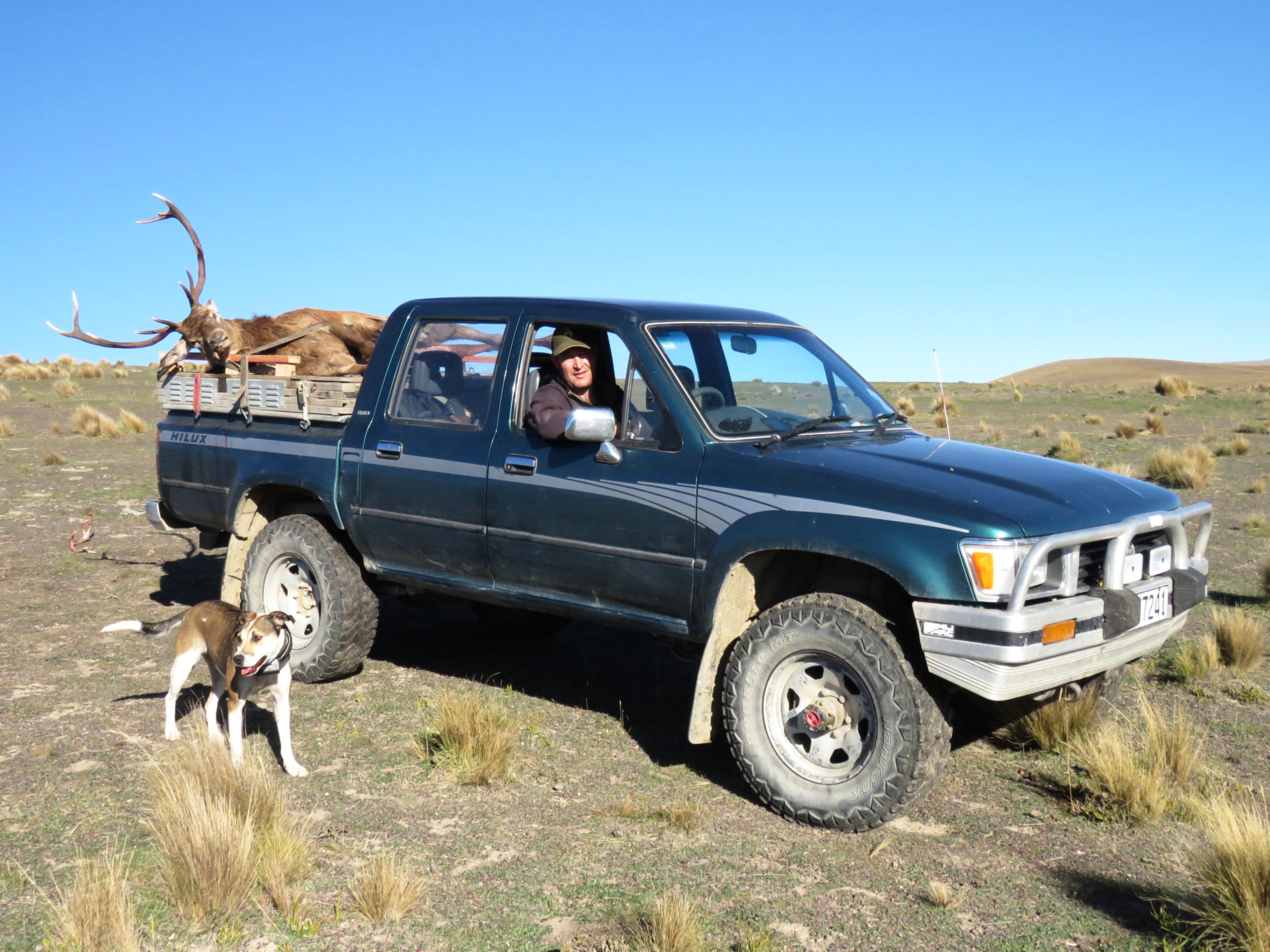 Carcass retrieval was not a problem with the old 2.8

The four hour bone jarring grind along the highway to the high country station bought back such fond memories of all the steering wheel wrestling I’d done over the years. However once the non-auto hub locks were turned, with the aid of a 30 inch crescent, there was nothing holding the old girl back. She took to the hills as spritely as the deer we saw bounding off over a ridgeline near the four wheel drive track.

Click to watch the video highlights from our trip in the old 2.8 Hilux.

We were up here for a few days so we were in no rush to shoot a meat deer this early on in the trip for fear that the flies might try to start a family on our venison. Pigs were a different story, the farm considers them a major pest and even has to do regular helicopter culls to keep the feral hog numbers under control. The bright red sweet briar berries were in full ripeness, so anywhere there was a good thicket of briar there was likely to be a pig nearby. The home built wooden crate fastened to the well side deck of the Hilux confined a very keen team of dogs, so we released them above a gully of briar and soon had a couple of fat young pigs to carry. 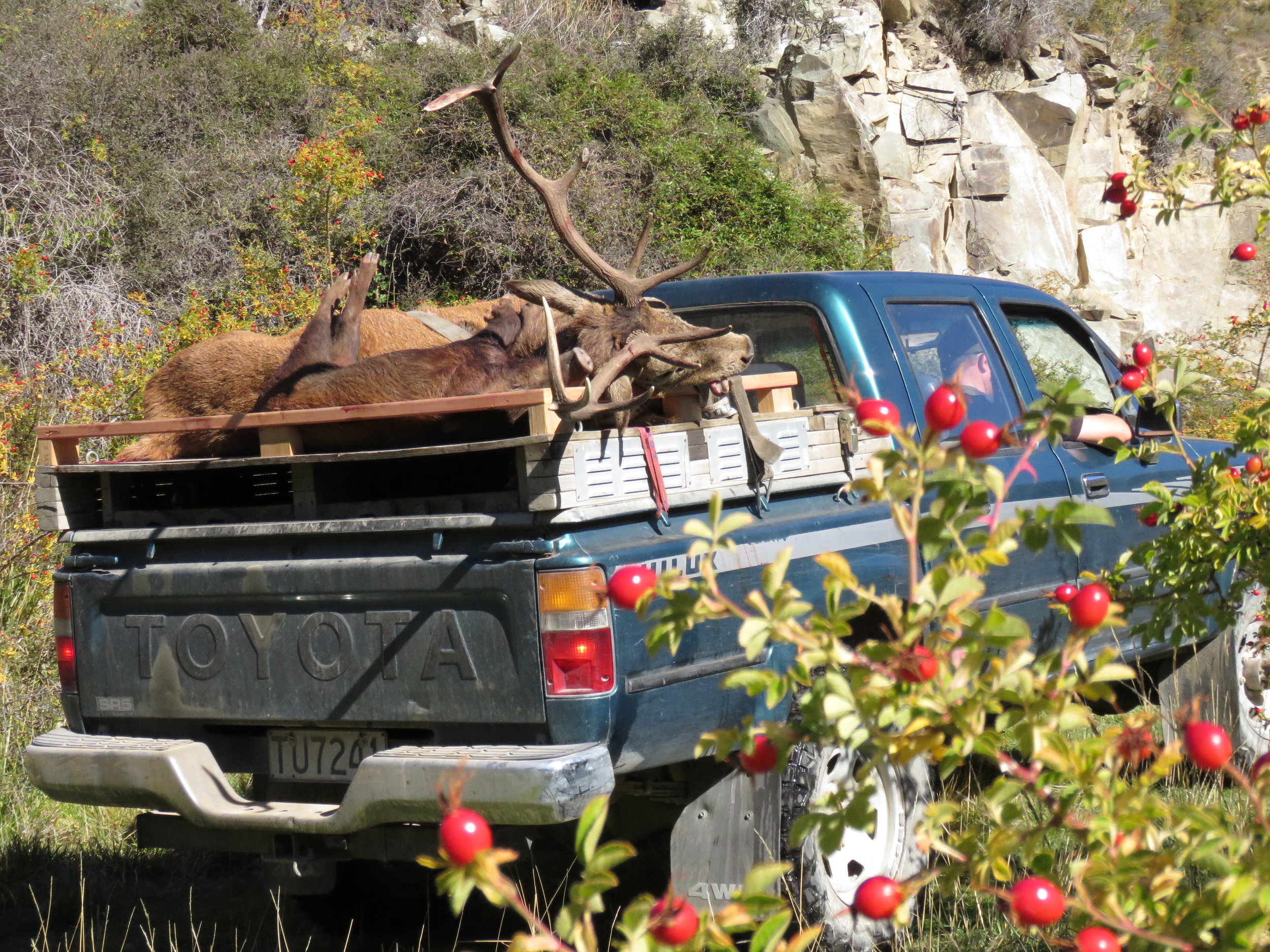 Ripe sweet briar berries are a great attractant for wild pigs and deer.

Eventually at the back hut, we found a hole in the nearby stream to sink the pig carcasses so keeping the meat fresh and maggot free. After setting up our camping gear, it was a matter of driving the ‘lux along the ridgeline tracks to find vantage points where we could spot for stags and pig sign. Having the pig dogs with us on the deck and the long rifles in the back seat we were ready for whatever species we might bump into. Luckily for the deer the majority of pointing and shooting was done with the camera but the pigs were not given so many favours.

We had also struck the tail end of the red deer rut and were treated to some roaring stag spectacles between pig hunts with the dogs, it really was a multi-sport hunting event to be remembered. Our mate Chief joined us for a couple of days, which was good of him seeing as he had actually organised the trip and he came away with some reasonable pigs and a couple of very nice red stag heads.

Sparky is not renowned for his deer hunting capabilities being colour blind and heavy footed but he was determined to secure a stag. For some reason most of the animals we came across seemed to be missing one antler and when a stag finally popped up near him that had two antlers he wasted no time in dropping it. His determination didn’t stop there as he was adamant he could get the 2.8 ‘lux all the way along an untracked ridge to his stag and retrieve the entire carcass, so that’s exactly what he did.

On the last evening I managed to knock over a couple of fat yearling hinds which I retrieved with the quad bike and by now we had a fairly decent load of meat to lumber onto the shocks of the poor old Hilux. When you’ve got such a great trip to reflect on it doesn’t really matter how long it takes you to get back home and if you overtook us you might have even heard us singing a few ‘90’s ACDC tracks, screaming our lungs out to over throw the loud whine of the ute. Our singing was pretty terrible, but the old 2.8 didn’t miss a beat all the way home where she was unloaded and tucked back away in the back of the un-used wool shed to wait for another day when we feel like a bit of classic hunting.

The 2.8 Hilux has really become a kiwi icon and rightfully so. If you’re still running a 2.8  then I urge you to keep bolting replacement parts on her and keep enjoying your time behind the wheel of arguably the best hunting truck ever built, because once you go plastic, its hard to go back. 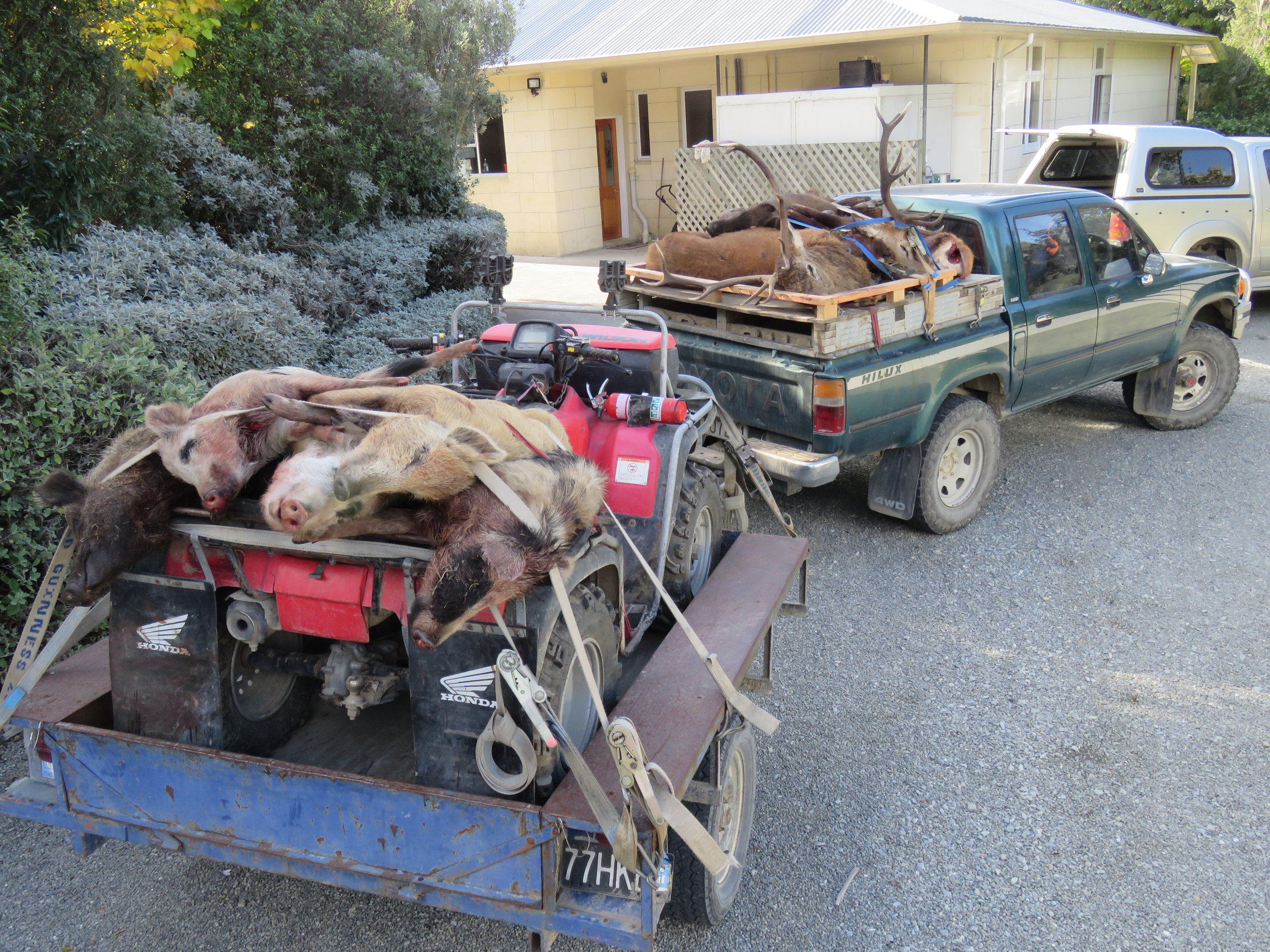 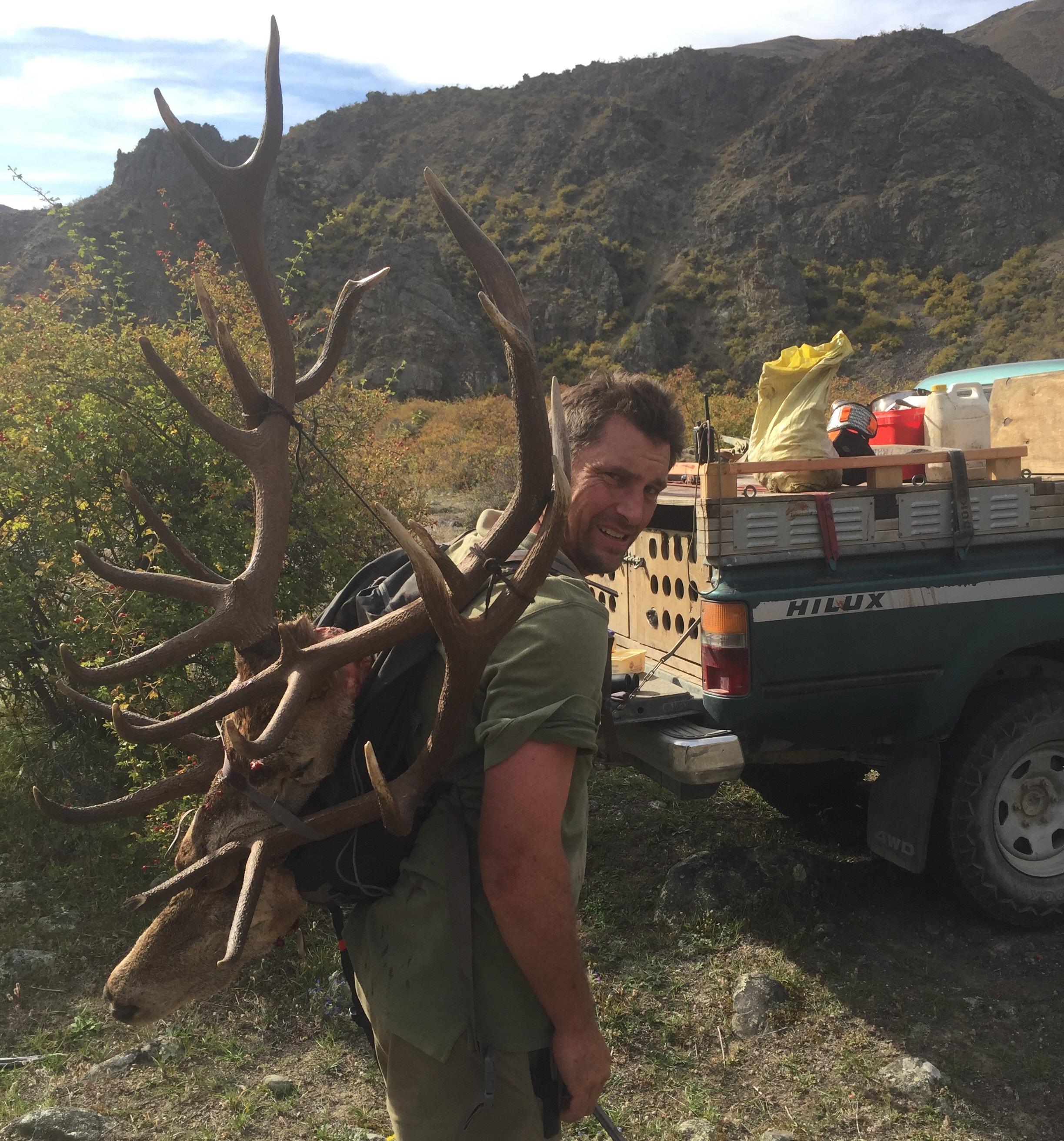 Heading home with a hell of a load for the poor old 2.8 Hilux

Chief back at the Hilux after a big day picking up a bit more bone to add to his collection. 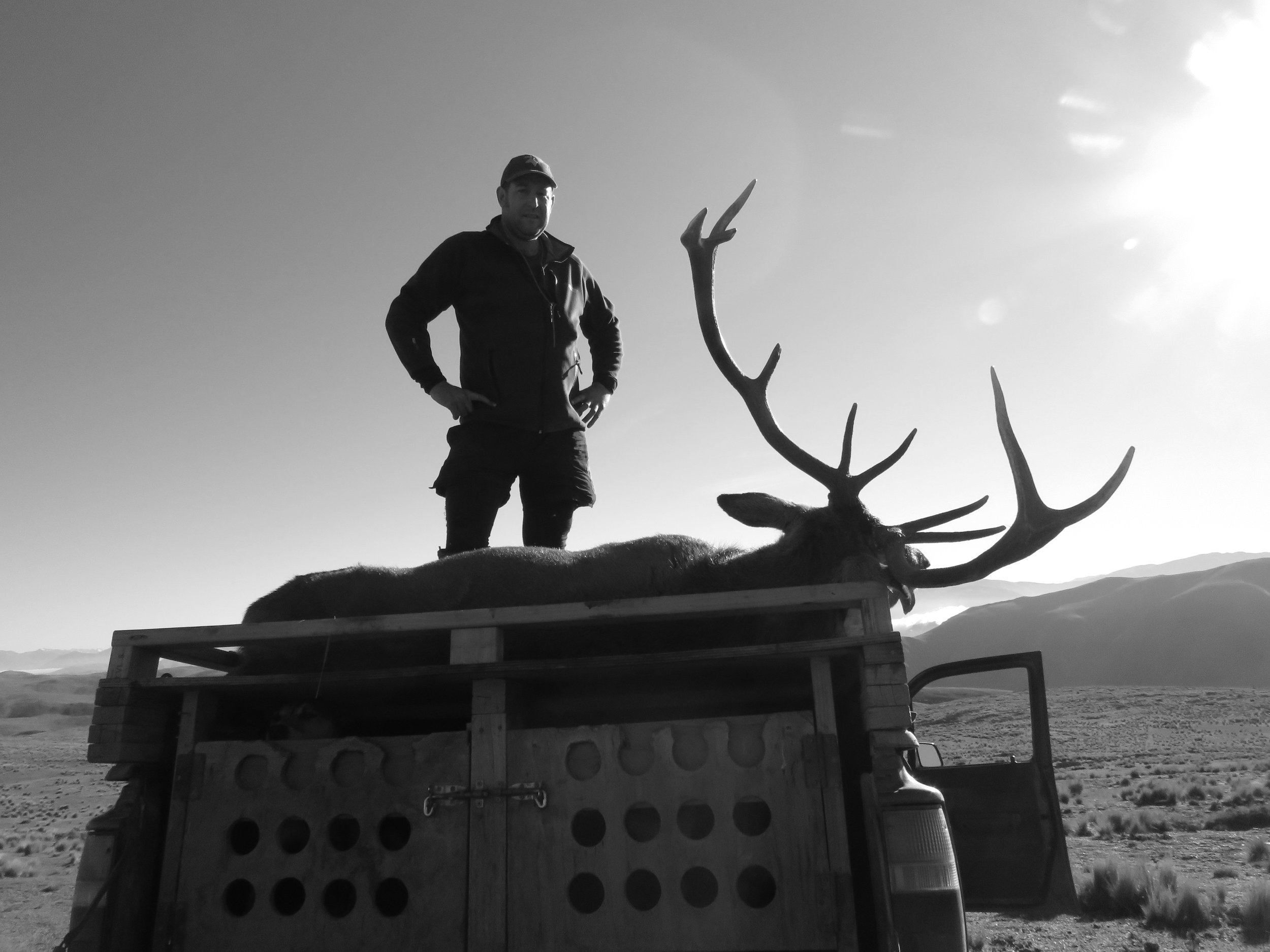 Sparky's whole stag loaded onto the back of the Hilux. 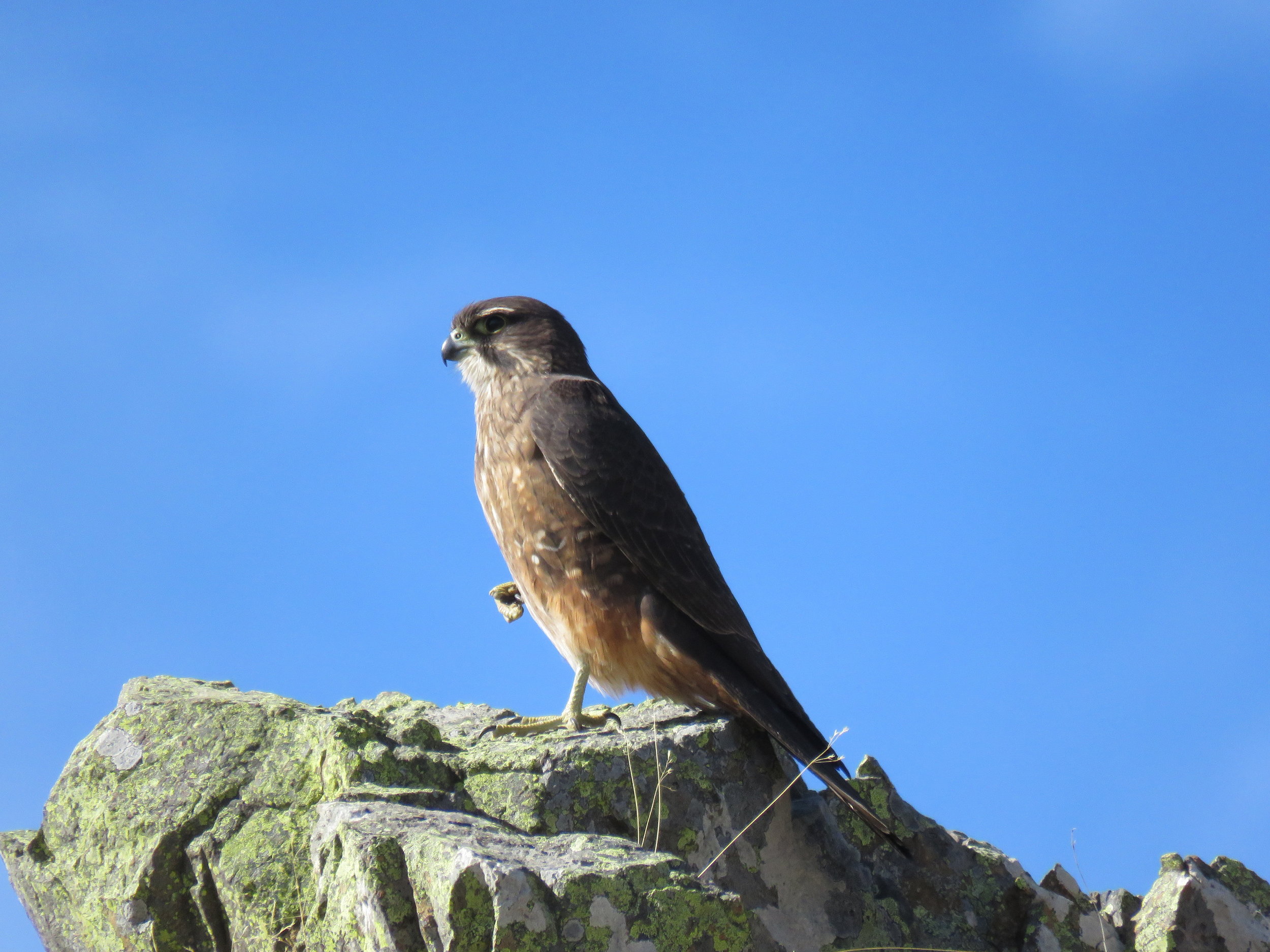 A New Zealand Falcon happy to be photographed from the window of the Hilux. 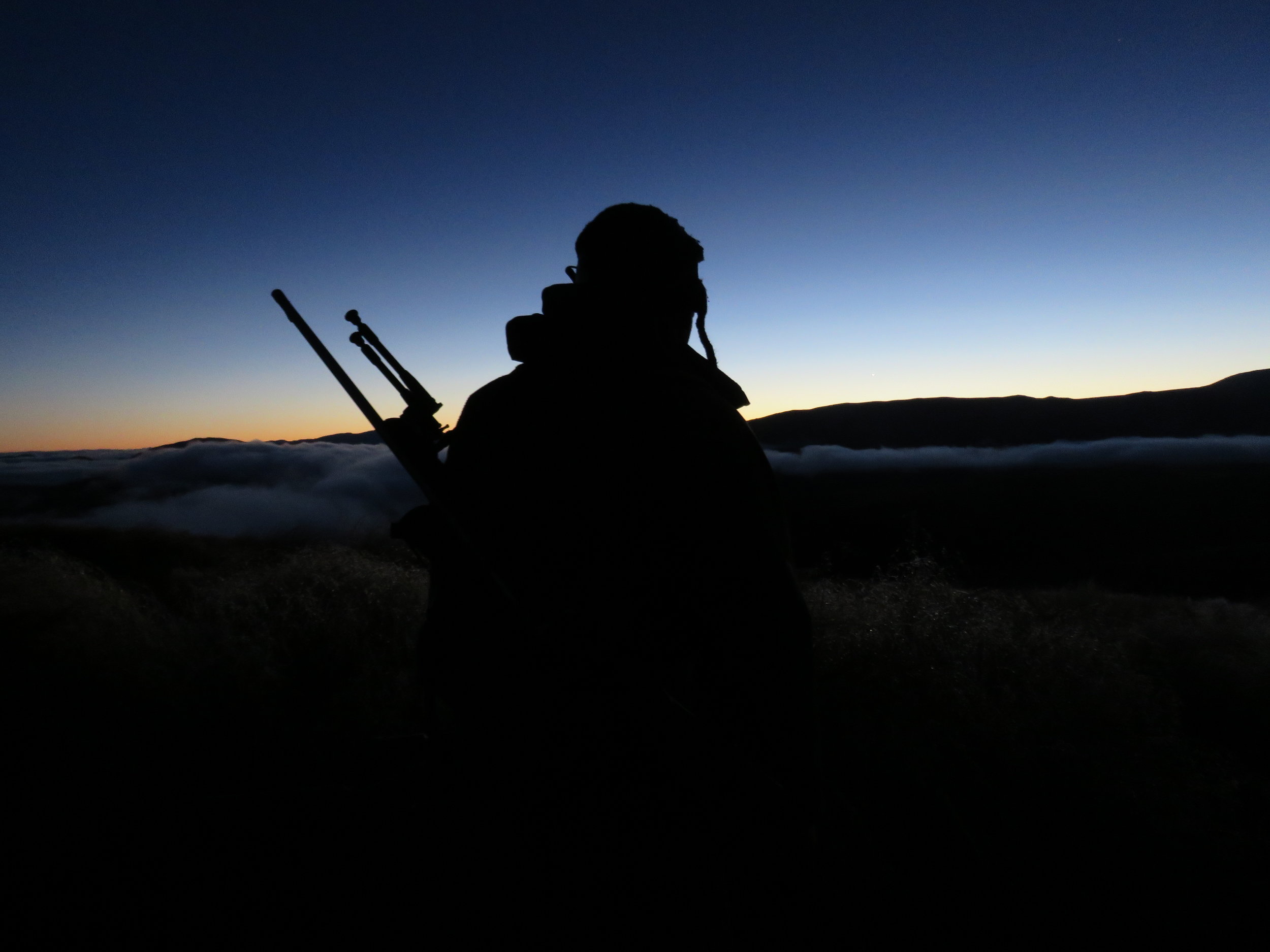 An early start hoping to catch out a red stag 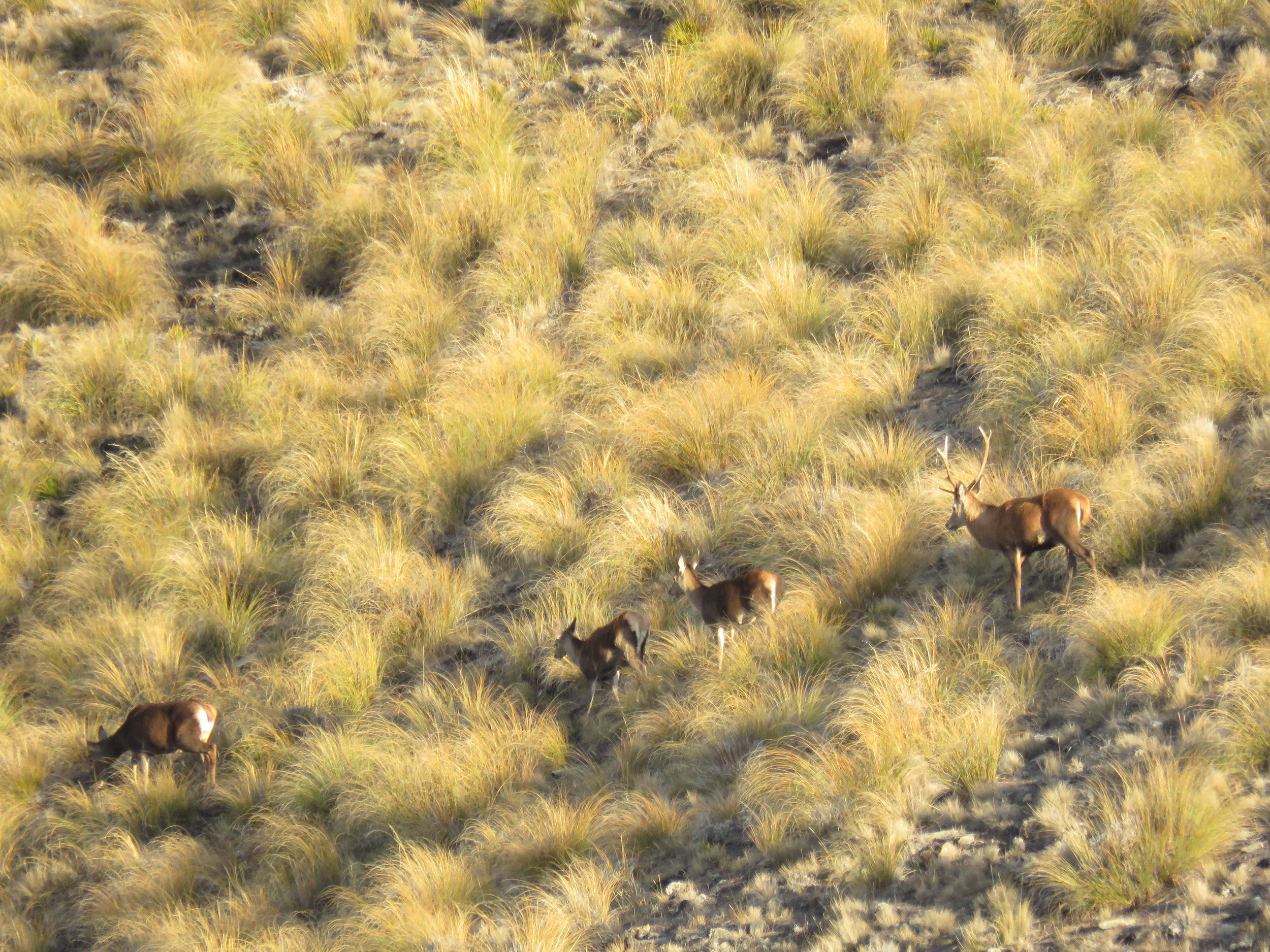 Hinds being trailed by a rutting stag. 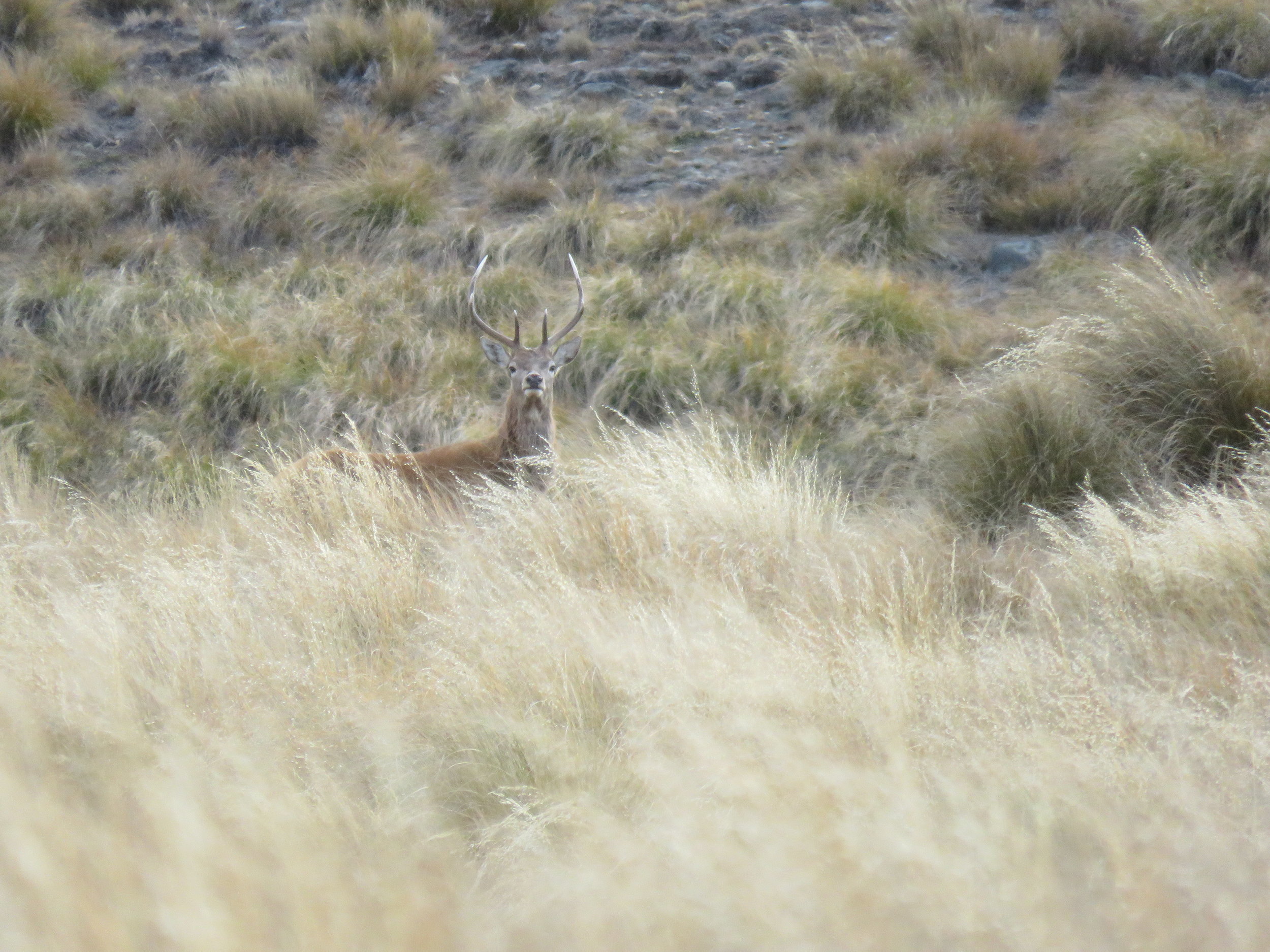 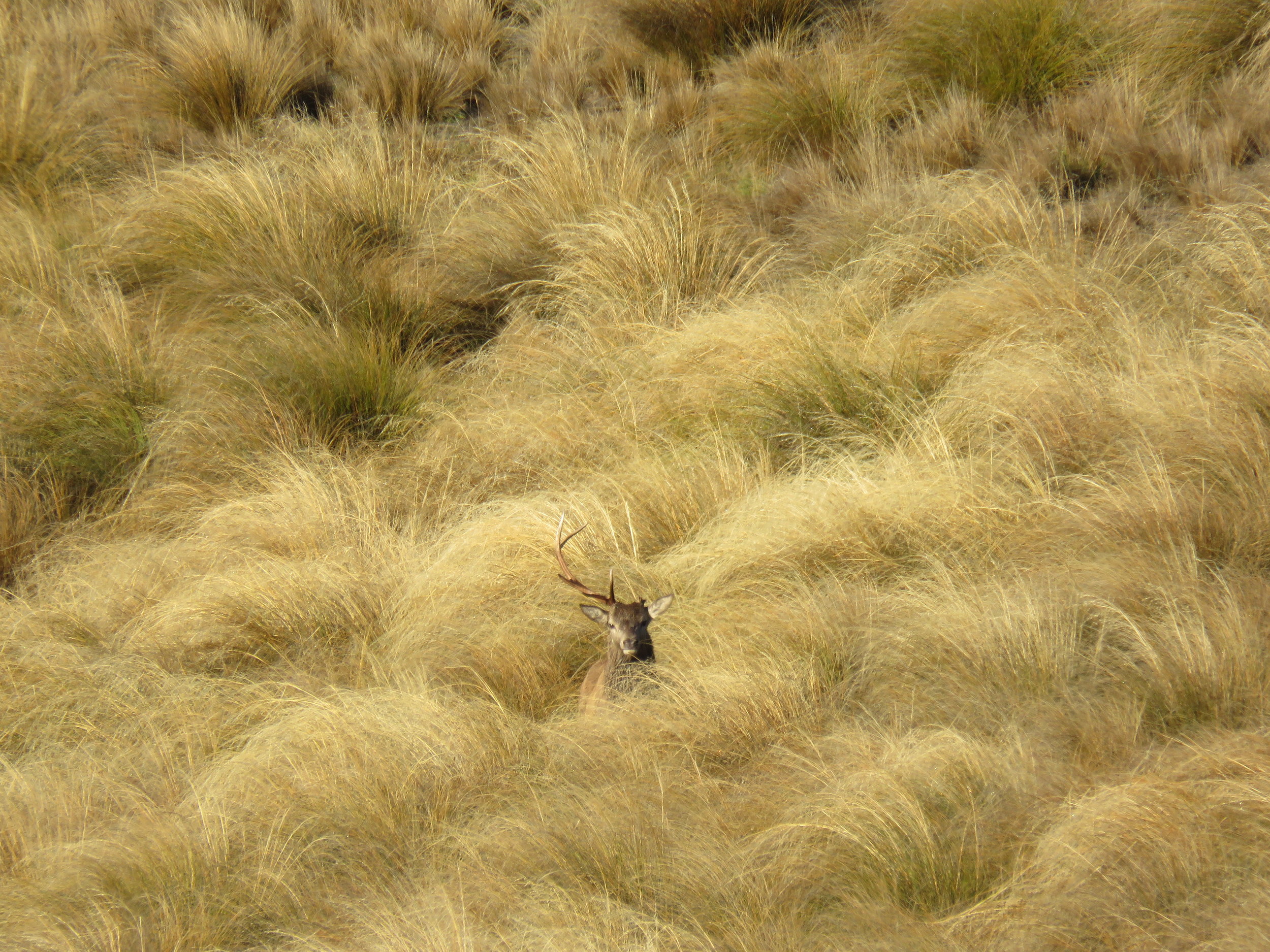 Have you lost something mate? 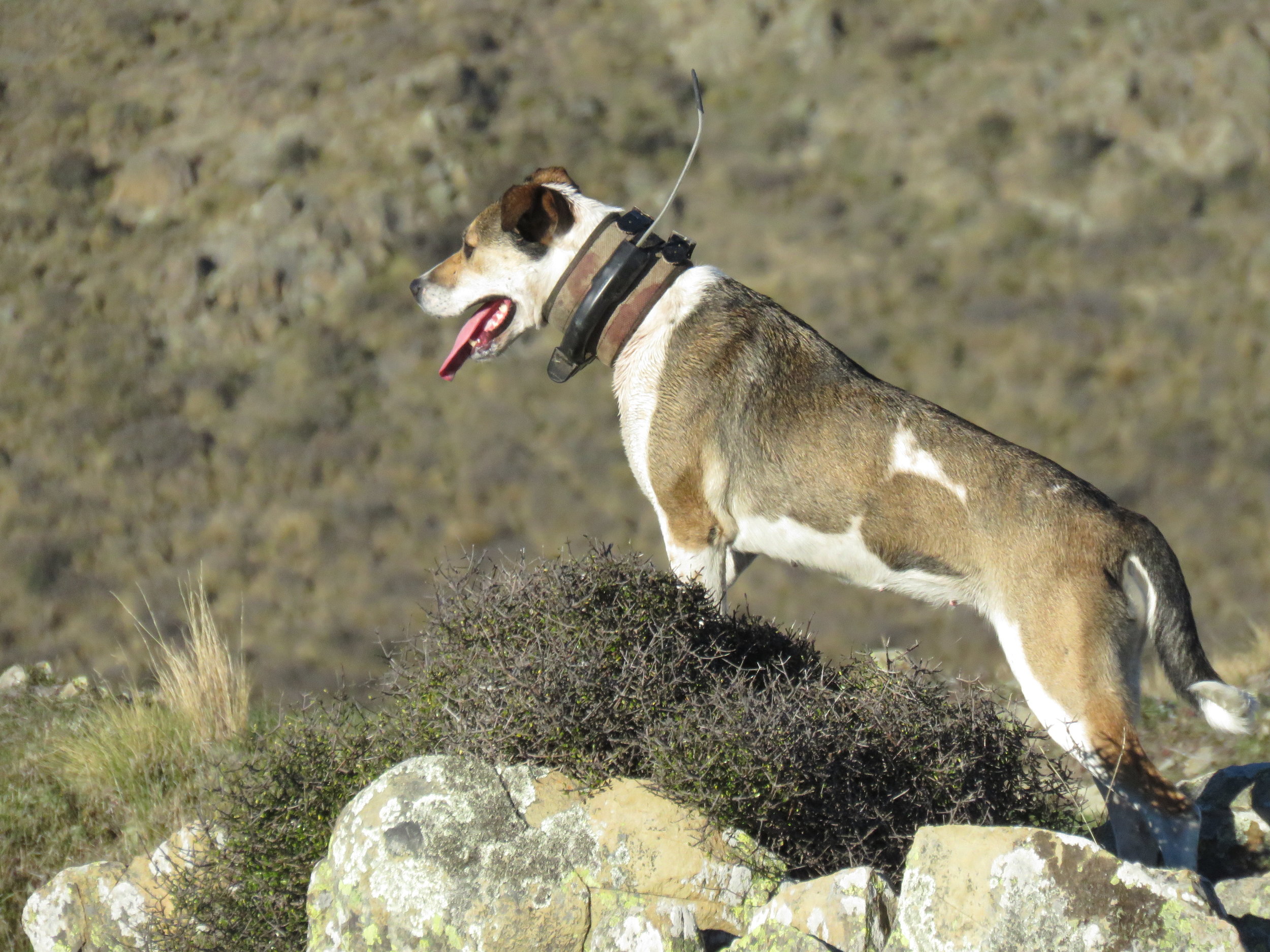 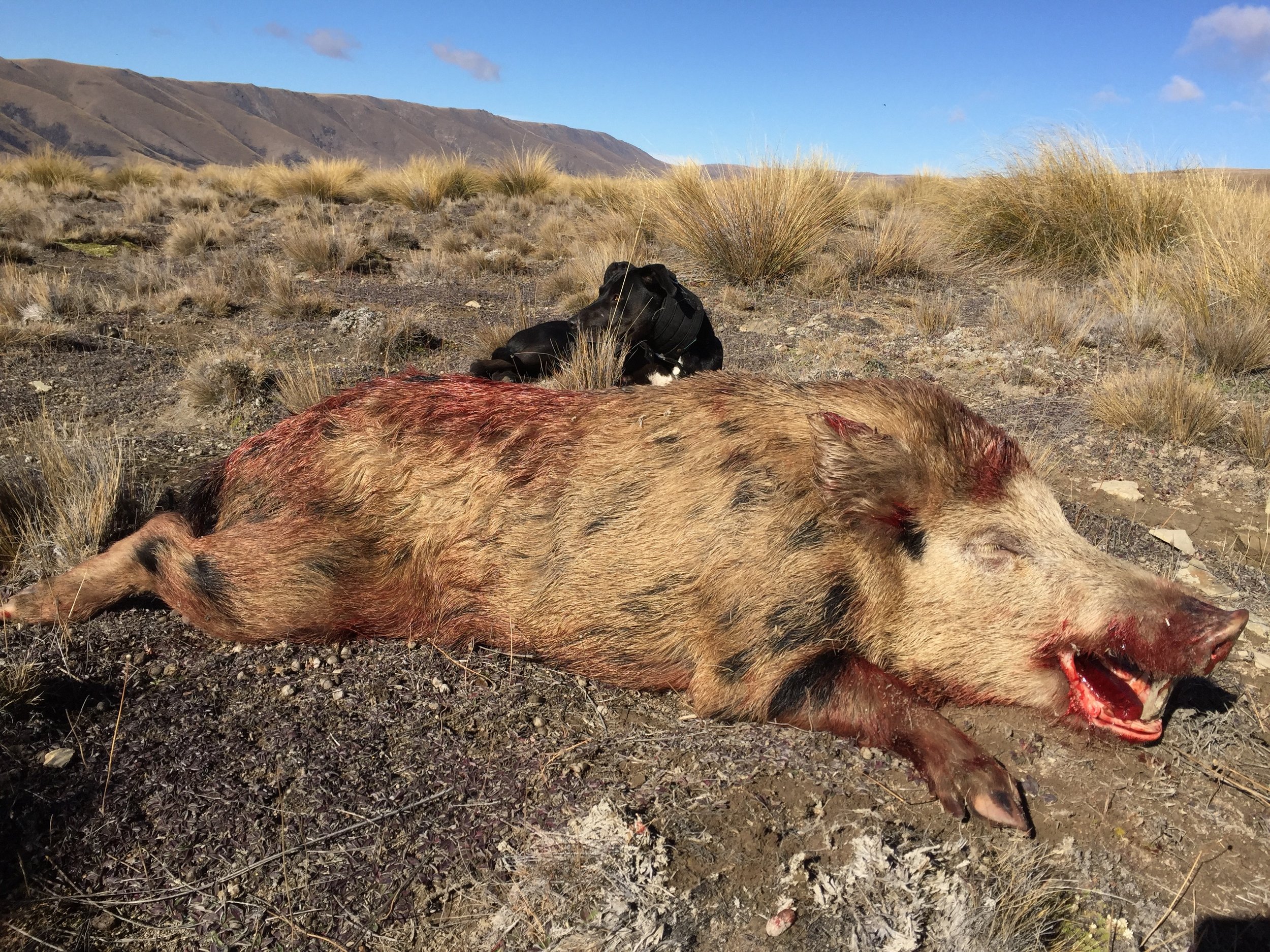 Chief's little dog Meg with a boar that she bailed up on her own, while her owner was trying to close in on a stag.